The Other Tradition is a group exhibition that identifies a new genre of art in which a constructed situation, event, or action is the central medium for a young international group of artists. For the opening of the exhibition, Danai Anesiadou re-stage 'One Measures a Circle, Beginning Anywhere (2009-10)', an event for a small groups of spectators. Also, Pilvi Takala's Bag Lady will take place in shopping in Brussels on Saturday February 26th. To conclude her residency at Wiels, Aukje Koks presents a project made in collaboration with the artist Istvan Ist Huzjan, entitled 'Fraud, absence, impossibility'. 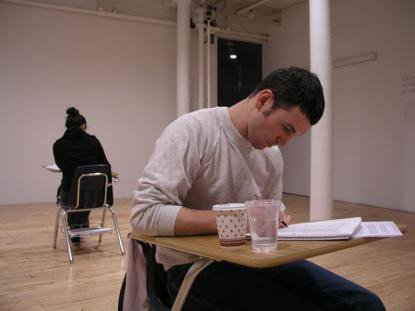 The Other Tradition
Curated by Elena Filipovic

This group exhibition identifies a new genre of art in which a constructed situation, event, or action is the central medium for a young international group of artists. Many will carry out live actions, involve actors to enact their instructions, or in some way record their actions for the exhibition. Still, despite a live event being at the center of the production of the thing they call the work of art, existing terms such as ‘participatory art’ ‘performance’, or ‘relational aesthetics’ are not appropriate to describe what they do.

And indeed the legacy of Conceptual art is often their reference point. To it, these artists bring the tactics of public protest, dance, esotericism, social work, or storytelling, for example, while actively rethinking the traditional objecthood of art and the terms through which it engages both its subject and its public. From the act of arranging to have two strangers spend the entire duration of the exhibition learning to copy the handwriting of the other (Jirí Skála) to staging outmoded demonstrations in different cities (Sharon Hayes) or from the act of getting an office job and going every day but deliberately not working (Pilvi Takala) to engaging a museum attendant to spontaneously recite the day’s newspaper headline to visitors at the ticket desk (Tino Sehgal), to name just a few examples of some of the diverse projects featured in the exhibition. Different unannounced events and actions, artifacts, documents, installations, films, props, and other objects will be visible as each artist’s contribution to this experimental exhibition’s attempt to identify the terms of what an other tradition of art could be.

To conclude her residency at Wiels, Aukje Koks presents a project made in collaboration with the artist Ištvan Išt Huzjan, entitled ‘Fraud, absence, impossibility’.

In the context of their research, the two artists have been interested in understanding systems of intimate human relationships through basic structural concepts :

1. A structure determines the position of each element of a whole.
2. Every system has a structure.
3. Structural laws deal with co-existence rather than change.
4. Structures are the "real things" that lie beneath the surface or the appearance of meaning.

Through their self-invented collaborative process, Aukje and Ištvan Išt have dissected constructs such as individuality and self-recognition within social systems like a nation, a circle of friends, an art world, while trying to reconstruct the ego of The Two - a fully-grown creature communicating its existence by taking over the Project Room at Wiels.

For the opening of the exhibition, Danai Anesiadou and her cast of collaborators re-stage One Measures a Circle, Beginning Anywhere (2009-10), an event she first presented to three small groups of spectators two years prior in exactly the same spaces at Wiels. Revisiting her improvised original and, in the process, demonstrating the difficulty of memory to accurately reconstruct lived events, she invites visitors (again) to an intimate gathering that is characteristic of her mercurial practice. Rumors, mystery, evocations, and the intimacy of secrets are, after all, the centrifugal forces out from which her whole oeuvre radiates, so it is fitting that she returns to a performance that was known, mostly, through the stories told about it by the few who had seen it. The event is an extension of her contribution to The Other Tradition, where the artist’s idiosyncratic interpretation of the task of creating evidence of the original performance will be on view for the duration of the show.

Three groups of 30 people will be able to take part in the event for the opening, with three viewing times: 10pm, 10.45pm and 11.30 (duration 25 minutes). Seating is thus limited and reservations mandatory.

As part of her contribution to The Other Tradition, Pilvi Takala’s Bag Lady will take place in shopping in Brussels on Saturday February 26th (exact location tbc). The simple action of a neatly dressed woman (the artist herself) carrying a lot of cash in a transparent plastic bag as she walks through the mall was previously realized twice, most recently as part of the 5th Berlin Biennial’s night program in 2008. Revealing the unwritten rules of society, as does so much of Takala’s larger body of work (and indeed as does her project, The Trainee, featured in the exhibition spaces of WIELS), Bag Lady is a simple but revelatory action in which the artist behaves like a perfect customer while doing something apparently “wrong.” Invariably (and as previous versions of the action have revealed), customers and sales personnel comment and whisper and eventually security guards tell her that she “is not allowed” walk around as she does with all that money. She thus reveals how the act of showing your money too conspicuously in a public place of commerce invariably becomes both a security threat and a subject of protection and, in the process, she challenges the pleasant and secure shopping atmosphere of the mall, especially the people responsible for maintaining it. This slight intervention sheds controversial light on the fragility of the social order, where private property in the form of money or a consumer product is of such supreme value that it is under constant intuitive public control.