The landscape as a blueprint . The work of Beaumont is characterized not only by the constancy of its imagery, of the creative thought behind it, but also by his belief that he is a painter who can and may speak his own language. In his own words, he looks for the' visual translation of the landscape element'. 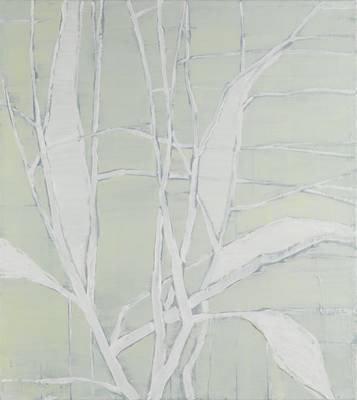 The work of Yves Beaumont (°Ostend, 1970) is characterized not only by the constancy of its imagery, of the creative thought behind it, but also by his belief that he is a painter who can and may speak his own language. Though he gets his inspiration from a single source – the landscape – he has a gift for transforming this traditional subject into a contemporary meditation on painting and its means. In his own words, he looks for the 'visual translation of the landscape element'. Everything to do with this concept serves as a means and an impetus to, and a cause for, expressive enthusiasm, as a challenge to trace everything back to one ultimate point, to a line, to a surface division between light and dark, a graphic network of cracks in the ice, branches throwing a shadow against a bright background, shattering the serenity of a scenic rhythm, a vegetative element's twist, reflections and the emotionally charged yet composed feel of a repetitive memory of trees in dense forests and woodland areas. His painting is at once sober and ecstatic.

He finds himself fascinated and inspired not just by the Dutch and Flemish landscape painters of the seventeenth and eighteenth centuries and the English masters Turner and Constable, but also by Spilliaert and Mondrian. We should also name Theodore Rousseau and Camille Corot. Even the work of Claude Monet can be said to be in line with Beaumont's views on landscape, in the sense that reality and pictoriality merge with each other enthusiastically, that the thought transcends that which is portrayed and slowly seizes the viewer as it has the author, the creator, the visionary. The monumentality of some of his artistic approaches, views and interpretations reveals the intensity of the emotion, the need to repeat, the fear to say goodbye, the knowledge that the subject has freed itself from its contours. Yves Beaumont starts from an observed or experienced reality, from a fact that immediately acquires a purely artistic style and dimension, which almost becomes a pretext for questioning and exploring the act of painting itself – as indeed did Mondrian, Spilliaert and others.

Almost obvious data points include the dark breakwaters, the quiet, grim sand dunes and deserted beach ways that lead into the light of the sea. Static rows of trees become vertical rows of pictorial elements moving into the distance. Rhythms meet, two planes are each other's antipodes. The existing image is purified and expanded into an ethereally artistic presence of darkness and light, of a suggestion that has emerged from reality and become thought, but its original is never completely abandoned. We find this process to be at once artistic and spiritual. A painting by Beaumont is not just a canvas covered with some paint, it is the witness of a growth in which each layer complements the next, challenges it, overpowers it without destroying its transparency.

The figurative element is still present, sheltering in apparent monochrome or figuring triumphantly in the totality of paint and sign, of suggestion and recognition, of rhythm and alienating light, as an essential touch in a lake of frailty and subdued shades of blue, green, yellow, shining gray and shadows. Transparency skulks around all corners and in every place where skin has become diaphanous. The painting shines: it is both classic and contemporary, simple and complex, frayed and well defined, poignant and inconspicuous.  At times this confrontation of light and darkness ends in an amazingly sensitive surface distribution of black night and radiant morning meeting in a tangle of wispy bright fringes in which the portrayal reaches its ultimate form and completes its final growth.