Breaking and Entering, Nick van Woert's first solo exhibition in the United States, features all new sculpture by the artist, and a sixty-eight-page color catalogue of van Woert's work will accompany this exhibition. Charles Sandison works with language in his digitally generated installations, creating narratives in which words and symbols move and morph across the monitor screen over a finite period of time. 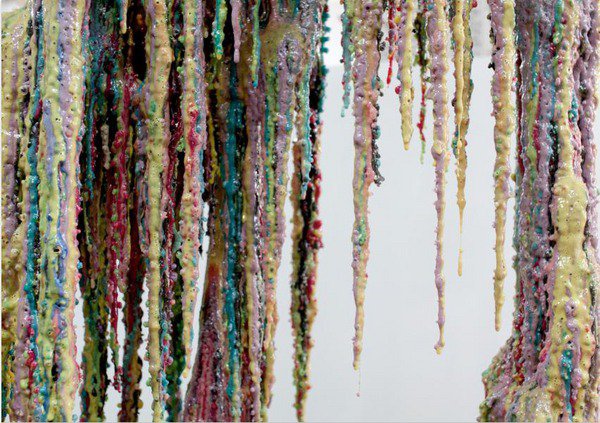 Yvon Lambert is pleased to present Breaking and Entering, Nick van Woertʼs first solo exhibition in the United States. Breaking and Entering will feature all new sculpture by the artist, and a sixty-eight-page color catalogue of van Woertʼs work will accompany this exhibition. Charles Sandison will be showing concurrently at the gallery, and both exhibitions will open with a reception for the artists on February 26 from 6-8pm and will be on view until April 6, 2011.

Van Woertʼs practice is rooted in the artistʼs interest in architecture, ancient history, and nature. Growing up in Reno, Nevada situated the artist between the cityʼs gaudy, over-accessorized buildings and the raw, unadorned natural landscape of the surrounding desert. The stark contrast between the way elements are made in nature with the landscape constantly changing through erosion and accretion and the way they are fabricated in the city provides both figurative and conceptual inspiration for van Woert.

In college, Van Woert studied architecture, a discipline that greatly influences his work. For the artist, the focus is on the evolution of building materials (from stone to styrofoam), and using that to develop a material language. His architectural interests are diverse, including Vitruviusʼs Primitive Hut, the Modernist schoolʼs emphasis on being true to materials and not concealing structural forces, as well as the modified architecture of radical “back-to-nature” groups. Van Woert even borrows material recipes from these ecoterrorists, using elements such as polyurethane, packing peanuts, steel, fiberglass, as well as hair gel and chlorine (which when mixed can become destructive).

For this exhibition, van Woert dissects found sculptures, often presenting the works as manipulated versions of their former selves. Breaking and Entering also refers to a recent robbery at van Woertʼs studio, in which thieves broke a window to enter the space. This was a formative experience for the artist, as the force used by the intruders to enter and alter his environment reflects the motives behind van Woertʼs own sculptural practice.

Yvon Lambert is pleased to announce Body Text, Charles Sandisonʼs fourth solo exhibition with the gallery, and his second at Yvon Lambert, New York. The exhibition will run concurrently with a solo show by Nick van Woert. Both exhibitions will open with a reception for the artists on February 26 from 6-8pm and will be on view until April 6, 2011.

Charles Sandison works with language in his digitally generated installations, creating narratives in which words and symbols move and morph across the monitor screen over a finite period of time. This screen tie is carefully calculated and pre-determined by the digital code created by the artist. The words not only simulate patterns in communication and behavior, but also indicate a word play that speaks to Sandisonʼs personal approach to his art; he considers himself a writer in an artistʼs body.

The juxtaposition of the artistʼs timeless fascination with the human body and the contemporary technology forms the basis of this exhibition. The artistʼs studio is based in Tampere, Finland, which is known for its long and near arctic winters. As a result, his studio suffered from intermittent power outages, forcing the artist to replace his computers and monitor screens with candlelight, pencil and paper. The artistʼs return to drawing reignited his interest in the human form, and when the power returned to his studio, he introduced his traditional life drawings to his digital universe.

For Body Text, the artist presents three LCD monitor screens, which depict the artistʼs Finnish models, Eva, Sara and Maria. Each model is scanned three-dimensionally and reworked by computer programs. This process results in a new form of 21st century figure drawing that exists in the digital world. These constantly changing, algorithmic forms are contained within the LCD panels that act as both a frame and a womb for the human forms gestating within. Using this medium to forge a link between image and text, a translucent membrane of words and numbers replaces the hair, skin, muscles and bones of his subjects. These works examine growth, aging, individuality, and the representation of human form through a digital lens.