This exhibition includes a number of his diagrammatic drawings that he referred to as "narrative structures" -from simple preparatory sketches to precisely executed pieces- but also focus on the working process he employed to develop and complete them; featuring a reading area with a selection from his reference books, the sole video interview with the artist, and other materials. 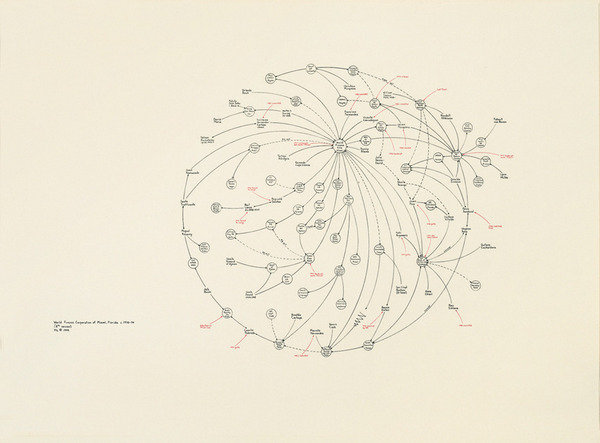 Mark Lombardi (1951-2000) is primarily known for his diagrammatic drawings that he referred to as “narrative structures.” This exhibition will include a number of those drawings—from simple preparatory sketches to precisely executed pieces—but will also focus on the working process he employed to develop and complete them; featuring a reading area with a selection from his reference books, the sole video interview with the artist, and other materials.

Lombardi was fascinated by the subjects of his drawings and became interested in the topics long before he incorporated them into his artwork. He originally studied art history in Syracuse and upon graduation moved to Houston to work as a curatorial assistant at The Contemporary Arts Museum. Throughout the more than twenty-year period he lived in Houston, while he worked as an abstract painter, librarian / archivist and gallerist, he continued to be fascinated by power relationships and avidly followed reporting on the savings and loan scandals of the 1980s and early ’90s, many of which involved nearby Texas institutions. He became interested in writing on these topics but, at a certain point, realized that the diagrams he’d begun making—keeping the details visually organized in order to keep them organized in his mind—were potentially of much more interest than his writing. The same research materials he’d used for his writing became the source material for his drawings; primarily syndicated news articles and published books, by this time. A selection of these materials will be included in the exhibition. On view will be the full length version of the sole video interview where the artist describes and demonstrates his working process. Also on view will be examples of rarely seen abstract paintings Lombardi made prior to his diagrammatic drawing series. These black and white paintings are composed of fragmented, deconstructed letter forms. They reveal his interest in the building blocks of language, as well as abstraction, before he devised the diagrammatic format through which he could combine his narrative interests with abstraction.

“Mr. Lombardi’s interest in presenting pure information qualified him as a Conceptual artist, but in many ways he was an investigative reporter after the fact. He liked to say that his drawings were probably best understood by the newspaper reporters who had covered the scandals he diagrammed.” (Roberta Smith, The New York Times)

According to Lombardi, “Reading history has always been one my main pursuits. History as navigation, reportage, journalism. I also see this work as an offshoot of a lineage that goes back first to history painting. It has all the sweep and expanse, the drama and monumentality one might ordinarily associate with battle paintings or depictions of other significant historical events. But it goes back much further than that. The first story tellers no doubt augmented their tales with diagrams and pictographs drawn in the sand.” (Lombardi, c.1995)

Lombardi’s work has been included in numerous domestic and international museum and gallery exhibitions, including “Compass In Hand: Selections from the Judith Rothschild Foundation Contemporary Drawings Collection” (MoMA, NYC), “Uneven Geographies: Art and Globalisation,” (Nottingham Contemporary, England), and “Welt und System (World and System),” (Stäedtische Galerie, Dresden, Germany). Works from his narrative structures series are among the permanent collections of the Museum of Modern Art (NYC), the Whitney Museum of American Art (NYC), The Reina Sofia Museum (Madrid, Spain), among others.