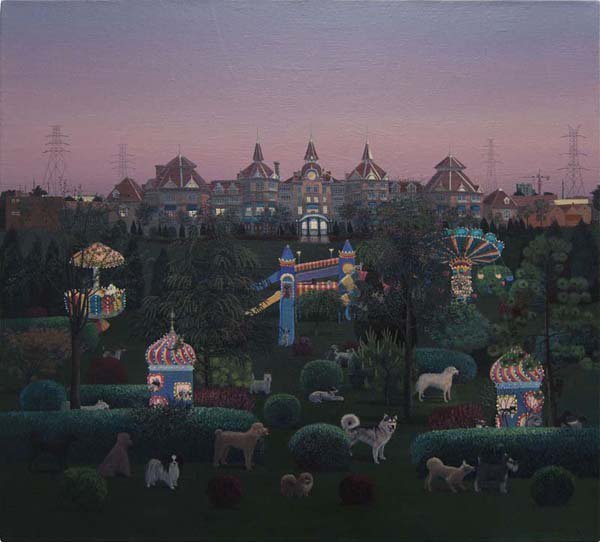 Zhang Gong was fascinated with New York City on his first visit which was his debut at Eli Klein Fine Art; he became inspired to portray this metropolis as a counterpart to his Beijing cityscapes. Beijing – New York showcases Zhang Gong’s new acrylic on canvas paintings of these two cities.

New York’s energy is expressively encapsulated with streets congested with traffic, rows of windows packed together, and spindly skyscrapers reaching up to the sky. Zhang Gong’s vision of New York, a panorama pieced together from pre-existing buildings and embellished with cartoon characters, has the visual effect of a chess game where all the pieces have rebelled against their grids and are now strewn across the board. While New York is portrayed through the eyes of a visitor, Beijing is depicted with the familiarity of a lifelong resident. In Beijing No. 1, the artist replaces historic imperial buildings with mundane offices and apartment buildings, each of them painstakingly detailed. Only the most prominent structures of day to day life are depicted, highlighting Beijing’s modernization.

Close attention reveals that the cartoons which were characteristic of Zhang Gong’s earlier work now take a backseat to the prominence of the rows of looming buildings. His latest work gives way to a new theme where abstract form supersedes narrative, and definitive interpretation has given way to mere suggestion.

Zhang Gong received his Master of Fine Arts from the Central Academy of Arts and Design in Beijing and is currently a Professor in the Department of Information at Tsinghua University. Zhang Gong’s works have been exhibited at the Kunstmuseum in Bonn, Germany, the Singapore Art Museum, and at the Museum of Contemporary Art in Shanghai. Zhang Gong’s animations have been selected for prestigious international film festivals throughout Asia, Europe, the United States, Australia, and Latin America.

The exhibition will be on view at Eli Klein Fine Art from March 3rd through March 31st, 2011 and is accompanied by a fully illustrated catalogue with an essay by Liu Ye. The artist will be present for the opening reception on Thursday, March 3rd from 6 – 9 PM.

Wang Yang: Into His Dreams

Eli Klein Fine Art is pleased to present Wang Yang’s first solo exhibition in New York. Into His Dreams, a new series of acrylic on canvas paintings in a variation of scales, will be on view in our Gallery B.

In Wang Yang’s whimsical world, humans have abandoned their most frivolous creations and left them to their pets. Dogs, cats, birds, and one pig revel in the joys of a domesticated utopia complete with water sprinklers, ferris wheels, manicured lawns, and abandoned mansions. Overpopulated, highly detailed scenes such as Paradise bring to mind the Dutch master Brueghel whose genre scenes also featured animals frolicking. Departing from depictions of animals as religious and mythical allegories or to represent the human subjects’ characteristics, Wang Yang portrays animals simply with poise and discernible training, revealing little about the disposition of each beast. However, born into a world of our human perspective, her subjects continue to engage in animal behavior, napping, sniffing and copulating.

With a disciplined hand and years of study, Wang Yang brings the paintings’ muted palette, unambiguous settings, precisely rendered body parts, and understated mastery of perspective together in a story of animals uninhibited and independent from humanity. The combinations of stark buildings, sparse trees, and illuminated lights against gray skies and pink sunsets in her compositions create a landscape both dim and charming as humans have exited this place where animals have learned to live serenely and harmlessly.

Wang Yang was born in Shanghai, China and graduated from the Graphic Design Department of Tsinghua University, Beijing, China. She currently lives and works in Beijing.

The exhibition will be on view at Eli Klein Fine Art from March 3rd through March 31st, 2011 and is accompanied by a fully illustrated catalogue. The artist will be present for the opening reception on Thursday, March 3rd from 6 – 9 PM.
For further information, please contact the gallery at (212) 255-4388 or info@ekfineart.com.