The Border is an exhibition of large-scale landscape photographs by Victoria Sambunaris documenting the diverse terrain and manmade barriers that define the approximately 2000 mile boundary between the United States and Mexico. Existing together in the same atmospheric sense, the works of Masao Yamamoto in the series "Kawa" suggest both a connection as well as a divide between the present and past. 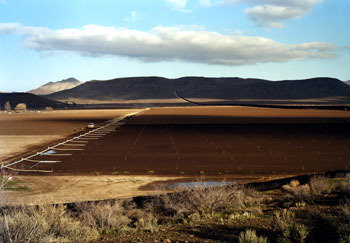 Yancey Richardson Gallery is pleased to present The Border, an exhibition of large-scale landscape photographs by Victoria Sambunaris documenting the diverse terrain and manmade barriers that define the approximately 2000 mile boundary between the United States and Mexico. For over ten years Sambunaris has set out by car and alone on extended road trips to photograph aspects of the American landscape shaped by man and geologic forces. As in her earlier photographs of areas marked by industrialization, such as the Alaska pipeline or mines in Nevada, The Border continues Sambunaris’ interest in the intersections of civilization, geology and natural history.

Both geographical divide and psychological barrier, the border takes form in myriad ways – river, virtual fence and physical wall. Sambunaris originally visited the border area at Laredo, Texas in 2000, inspired by the work of Robert Smithson, and his essay “Entropy and the New Monuments”, in which he addresses ideas of decay, passing time and entropy as an accepted condition. There she photographed the newly developed maquiladoras or assembly factories initiated by NAFTA. Ten years later, Sambunaris returned to the border area, driving over 20,000 miles between Big Bend, Texas and San Diego, California through the rugged terrain that comprises this seductive but dangerous region. The resulting images range from the Rio Grande River coursing through the spectacular and remote Big Bend National Park to the incongruous 18 foot high fence which runs relentlessly past border towns, alongside tilled fields, through grasslands and across uninhabitable desert until it disappears out of sight.

Despite the implications of the subject matter, Sambunaris’ images do not offer political commentary. Rather, they invite a consideration of man’s ineffaceable mark on the area’s geographic and cultural constitution. As the artist explains, “Although I am captivated by the idea of how we inhabit our landscapes as we forge ahead in our development, my intent is to transcend political, ethical, or environmental ideology and to allow viewers their own notions and meanings.”

Born in 1964, Sambunaris graduated from the Yale University MFA program in 1999. She will be the subject of a ten-year survey at the Albright-Knox Art Gallery opening November 2011. Her work is held in the collections of the Museum of Modern Art, New York, the San Francisco Museum of Art, the National Gallery of Art, the Museum of Fine Arts, Houston, the Virginia Museum of Fine Arts and the Lannan Foundation, Santa Fe, which granted her a Foundation Fellowship in Marfa, Texas. In 2010 Sambunaris received the Anonymous Was a Woman Award and the Aaron Siskind Foundation Fellowship Grant.

Yancey Richardson Gallery is pleased to present Kawa, our fifth exhibition by Japanese artist Masao Yamamoto. Existing together in the same atmospheric sense, the works in the series “Kawa” suggest both a connection as well as a divide between the present and past. Each print, measuring approximately 5 x 8 inches, avoids traditional capture of a singular event. Rather, these images conjure memories of fleeting and fluid moments, eliciting consideration and meditation.

As the artist states: Up to now I have been working in the form of installation. What overflows from one photograph would flow into the next piece, and in two's and threes, the groups would create a combined effect, like the layered notes of an orchestra. But recently my thoughts are more focused on the individual incident - the urge to dwell deeper into each element is rising slowly. A landscape or an incident around me is cut out into a square piece of photograph. What that square piece will inspire in you... perhaps it is something that already exists inside of you.

Yamamotoʼs spare and meditative photos depict natural subjects such as a perching owl, mushrooms growing on heavy rope or an abstract composition portraying lightʼs reflection on water. Part of a carefully considered selection for the gallery, these masterfully crafted prints, made by the artist in Japan, mark a subtle departure from Yamamotoʼs earlier series. Each one presenting a contained world of natural beauty, they are intended to be seen and contemplated individually as opposed to in groups. Yamamotoʼs images speak softly, with an intimacy that draws the viewer near to explore each piece at close range. Rather than telling a story or describing a scene, the work evokes a moment of heightened awareness, of looking with quiet intensity at the world.

Yamamoto has produced five books published by Nazraeli Press: A Box of Ku, é, Nahazora, Omizuao, and The Path of Green Leaves. His work has been exhibited internationally at the Centro per lʼArte Contemporanea, Rome, the Tokyo Metropolitan Museum of Photography, the Galeria dʼArte Moderna di Bologna, the High Museum, Atlanta, and the Museum of Fine Arts, Houston. The work of Masao Yamamoto is held in the collections of Harvard University Art Museums; Museum Contemporary of Photography, Chicago; Philadelphia Museum of Art; Museum of Fine Arts, Houston; The International Center of Photography; Center for Creative Photography; Princeton University Art Museum; Santa Barbara Museum of Art; Portland Art Museum.