Jane Benson's current project (The splits) begins with the bisecting of various string instruments into two halves, cutting them along their length, creating two separate instruments. Inspired by a famous statement by French thinker Guy Debord, a group show plays with the notion that at the beginning of the XXI century one is experiencing a period of fin de siecle. 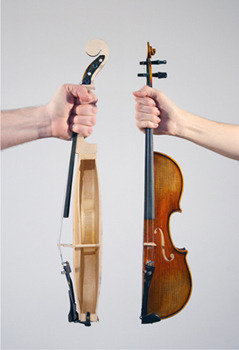 The Days of This Society Are Numbered

Inspired by a famous statement by French thinker Guy Debord, proclaiming that THE DAYS OF THIS SOCIETY ARE NUMBERED, this exhibition plays with the notion that at the beginning of the XXI century one is experiencing a period of fin de siècle. The state of affairs is questioned and a collective anxiety emerges – a situation caused by the feeling of political, economic, and cultural crisis that is permeating the Western world and creating a social entropy.

The Splits is a new collaborative performance project and exhibition by Jane Benson. The world premiere of The Splits on Sunday, February 27, 2011 will gather together ten musicians, composer Matt Schickele, and an ensemble cast of rigorously altered instruments for a multi-media event centered on acts of cutting and splicing, regeneration and proliferation. The instruments will be on display in an exhibition in the Abrons galleries, also titled The Splits, opening Sunday, March 6 through April 16, 2011.

Benson’s current project begins with the bisecting of various string instruments into two halves, cutting them along their length, creating two separate instruments. The two halves must then be played together to complete a tune and are, thus, for duets (or quartets, octets or dectets) only — pieces which she creates in collaboration with musicians and composers. The act of splitting at once destroys the integrity of the instrument as an object, and disrupts the conventional process of aesthetic creation that the instrument traditionally permits. Splitting is not merely an act of destruction; the newly formed instrument permits the creation not only of new music, but new communities (visual artist, composer, musicians, and audience).

Through a delicate process using precision hand saws Benson has “split” two violins, a viola, cello and double bass: all, cheap, mass-produced string instruments made in China. This choice was made after various discussions with musicians revealed that such objects were not considered to be “real” instruments at all. Cutting into such a “fake” violin, Benson realized, would not only spare the destruction of a beautiful, handcrafted instrument, but would also position the work more firmly within her ongoing conceptual framework, which explores the ambiguous and mutually constitutive intersections between the real and artificial.

In addition to splitting the string instruments she is also making a series of Split Scores (sheet music deconstructed specifically for The Splits). Because each half of the split instruments has only two strings, playing a limited range of high notes or low notes, the scores for the performances will be deconstructed for each player. For example, the musician playing the half of the instrument with the high strings plays from sheet music with the low notes scored away and vice-versa.

Preceding the opening of The Splits exhibition a free concert using the cleaved instruments is scheduled on February 27, 2011 at 7pm in the Abrons Underground Theater. Various duets, octets and dectets will perform an original score by New York composer Matt Schickele. Written specifically for these unique instruments, Schickele’s compositions intertwine rural and metropolitan traditions into a surprisingly accessible wash of strings and a range of unexpected tones best described as “alien folk music.” Relics of the performance, the split instruments, their cases, and bisected sheet music will be exhibited in the Abrons galleries.