The first comprehensive overview of Japanese avant-garde fashion of the past 30 years to be presented in Europe. With Japanese designers like Rei Kawakubo, Issey Miyake and Yohji Yamamoto and the next generation: pieces by, among others, Junya Watanabe, Jun Takahashi, Tao Kurihara and Jil Sander for Uniqlo. Finally the symbiosis between street style, popular culture and haute couture. 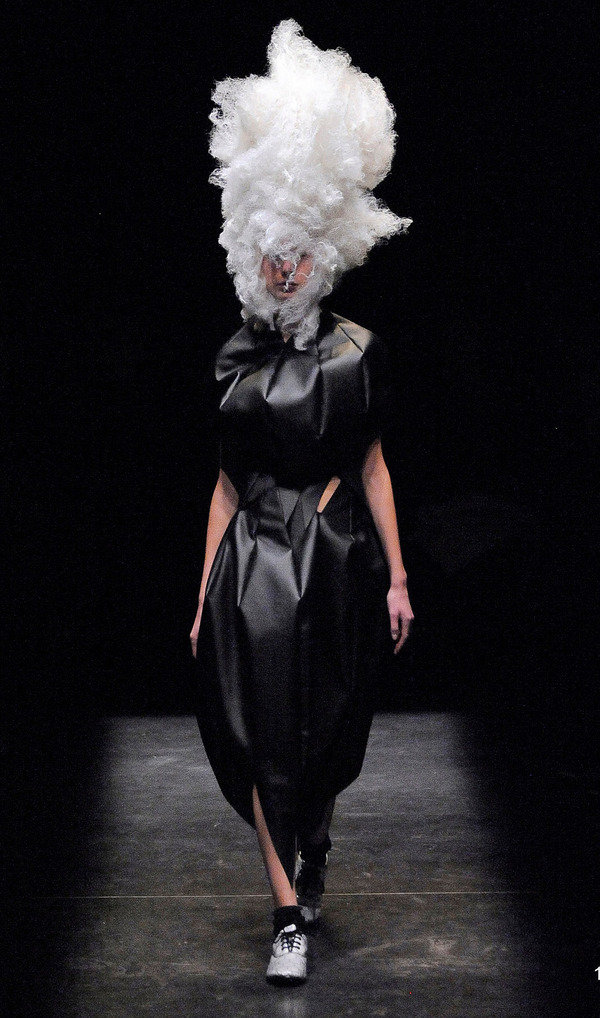 With nearly 130 exhibits, including garments, films of fashion shows, collection catalogues and other documentary material, this exhibition provides an overview of Japanese avant- garde fashion from the early 1980s to the present. It is the first of such project in Europe.

Since the 1980's Japanese fashion designers have fundamentally redefined and influenced fashion worldwide. Visionaries like Rei Kawakubo (b. 1942) and Yohji Yamamoto (b. 1943) introduced a language of deconstruction to international fashion. They use imperfect and aged materials in their pieces, while fashion designer Issey Miyake (b. 1938) employs opulent materials that envelope the human figure and create voluminous spaces between fabric and body. Instead of the slender silhouettes of Western couture, there are flowing forms and a darker, monochrome colour palette.
Japanese fashion designers vigorously transform their pieces into art. Japanese fashion, which intentionally does not focus on becomingness, represents a strong contrast to the typical European aesthetic sense of fashion.

In Praise of Shadows
"On all kinds of craft objects for everyday use we also love colours, which one could refer to as the accumulation of shadows; people in the West, by contrast, love colours in which sunlight concentrates." (Jun'ichiro Tanizaki)
This part of the exhibition is inspired by the text written by the Japanese author, Jun'ichiro Tanizaki (1933) who considered shadows the core of Japanese aesthetics. This section examines the passion for dark monochromacity. Black, which today has long become a norm in fashion, pervaded the works of Rei Kawakubo and Yohji Yamamoto in the early 1980s.

Yohji Yamamoto consciously choses a dark colour palette; nothing was to distract attention from a garment's cut and proportions. In 1973 Rei Kawakubo founded her company, Comme des Garçons. In the 1980s she became internationally known with her beggar or rag look, which she first presented in 1983 at a show in Paris. The pieces in her collection are filled with holes, are often ripped and lacking a variety of colour. Her works are an expression of a Japanese concept of beauty, "Wabi-Sabi": Beauty is found in imperfection and simplicity. This collection shocked the Western fashion world and Rei Kawakubo's approach – still considered anarchic – has made her one of the most influential fashion designers in the world.

Flatness
The section 'Flatness' is dedicated to simple geometric forms and the interplay between two-dimensionality and volume in the works by Issey Miyake, Rei Kawakubo and Yohji Yamamoto. Common to all is their radical rejection of the close fitting silhouette, which emphasises the human form. Also on view here is a photographic series, by the artist and photographer Naoya Hatakeyama, which presents the forms of Rei Kawakubo's spread out clothes from above.

Issey Miyake's starting point is the idea of the flat garment, which is the traditional cut of Japanese clothing. Miyake uses just "a piece of cloth" in which he wraps the person wearing it. Thus, between fabric and body a space is created that is unique to each person. With "A-POC" (a piece of cloth), in 1999 he created universal clothing for everyone: the forms for garments are worked into a knitted tube using computer programmed machines. The wearer cuts out the desired form. Sizeless garments thus become individual pieces of clothing.

Issey Miyake's newest works from his "132 5." collection consist of various folded, flat polygons that are tailored out of PET (polyethylene terephthalate). The garments transform when worn.

Tradition and Innovation
Presented here is the radical renewal of traditional Japanese garments, such as kimonos, of materials and techniques, such as origami. Many Japanese designers work directly with textile designers. Japanese fashion is characterized by a great sensitivity for fabric. New fabrics are developed using synthetic materials, for example, and new weaving and dyeing techniques are tested.

Junya Watanabe (b. 1961) combines synthetic materials with classic cuts found in costume history. Works of his on view include his Fall/Winter Collection "Techno Couture" from 2000, for which Watanabe used a new, high-tech fabric: a very light, water resistant microfiber that protects the wearer from rain.

A series of garments by Tao Kurihara (b. 1973) / Tao Comme des Garçons, Hiroaki Ohya (b. 1970) / Ohya and Mintdesigns is made of paper. The use of paper for clothing is an old Japanese tradition. During the Kamakura period (1185-1333) some people wore clothes made of paper, and expensive paper clothing was considered particularly fashionable during the Edo period (1603-1868). Such garments can be worn just once, emphasizing their uniqueness.

Kosuke Tsumura (b. 1959) presents a nylon coat, "Final Home" from 1994, which has more than 40 pockets; these can be filled, for instance, with crumbled paper, creating a warmer winter coat. "Final Home" can be worn as a kind of survival jacket in the city. In Rei Kawakubo's legendary Spring/Summer Collection "Body Meets Dress, Dress Meets Body" from 1997, padding appears on the shoulders and hips, deforming the body’s natural form. Kawakubo frees the clothing from its dependency on the human form, a shock to our standardized ideas of fashion. "Not what has been seen before, not what has been repeated; instead new discoveries that look towards the future, that are liberated and lively;" this was the written message of "Comme des Garçons" in 1997.

Modern variations of traditional Japanese techniques and clothing by Kenzo and Yohji Yamamoto are presented alongside the deconstructivist works by Rei Kawakubo. Yamamoto laid the foundation for the so-called Neo-Japonism: The combination of European fashion with traditional Japanese elements, such as the kimono.

Cool Japan
'Cool Japan' examines the symbiotic relationship between street style, pop culture and haute couture. Tokyo is internationally regarded as the centre of young people's fashion: In the 1980s many young designers created small labels there and opened independent stores in the Harajuku district. The area became increasingly popular with teenagers and even today they meet on the streets there on Sundays to talk and show off their latest carefully selected outfits. Their clothing is characterized by different styles and influences, including punk, gothic and mascots like Hello Kitty, Manga figures or the Lolita style. Works by TAO, Naoki Takizawa (b. 1960) and Jun Takahashi (b. 1969), who founded his label Undercover in 1991, are presented here among others.

Designs by Jil Sander for Uniqlo are on view as well: an "outstanding brand at democratic prices" (Jil Sander). For the reasonably priced Japanese brand the designer created a limited collection called +J; with the motto "Luxury will be simplicity", it is modest in price, simple and classic.

Films of fashion shows, which were staged in Japan and Europe, bring movement to the presented designs. Catwalk shows of the Next Generation, interviews with Issey Miyake, Rei Kawakubo and Yohji Yamamoto and the film 'Notebooks on Cities and Clothes' by Wim Wenders complete the show.

The exhibition was created in cooperation with the Kyoto Costume Institute in a structure designed by Sou Fujimoto.

The Kyoto Costume Institute (KCI) was founded in 1978 by the Wacoal Corporation. The institute resulted from a wish to create an institution in Japan in which Western fashion is systematically researched, collected and made available for exhibition. Today the KCI is one of Japan's leading museums for the history of costume design and contemporary fashion, and it includes a collection of 11,000 pieces of clothing dating from the early 17th century to the present. The KCI organizes fashion exhibitions all over the world and regularly publishes catalogues devoted to fashion topics. The collection is a "dedication to all people who wear clothes" (Akiko Fukai).

Sou Fujimoto (b. 1971 in Hokkaido, Japan) belongs to the younger generation of architects in Japan that is working on a new definition of architectural space. Fujimoto became known through his "primitive architecture", houses characterized by flowing floor plans and transitions between inside and outside. He divides the exhibition sections from each other using light, translucent panels of fabric.

The exhibition catalogue is published by Prestel Verlag.