For the Baroque and Rococo garden of the 17th and 18th century described by Rudiger Schottle, 14 international artists have created works that are presented in a collaboratively developed installation. The exhibition - presented for the first time in 1989 - was designed from the beginning as a work in progress. The resulting project combined architecture, sculpture, music, photography, film and theater and inspired a younger generation of artists and curators to create new exhibition forms. 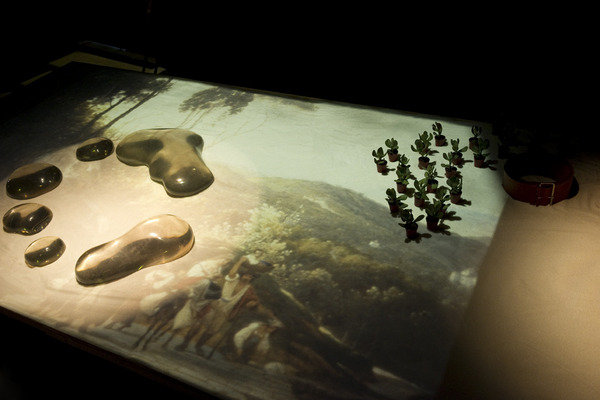 A reconstruction of an experimental exhibition

The exhibition is based on "Bestiarium: Theater and Garden of Violence, War and Happiness" (1986), an essay written by the Munich gallery owner Rüdiger Schöttle. The "Theatergarden" described in the text is rooted in the Baroque and Rococo garden of the 17th and 18th century with its natural and artificial worlds. For this garden described by Schöttle, fourteen international artists have created works that are presented in a collaboratively developed installation.

After two years in the making, "Theatergarden Bestiarium" was presented for the first time in 1989 at the Institute for Contemporary Art, P.S. 1 in New York. The path leading to the final exhibition was marked by an intense exchange among all those involved. The exhibition, which was based on a conceptual design by Rüdiger Schöttle and produced by Chris Dercon, was designed from the beginning as a "work in progress". The aim was not the juxtaposition of isolated works arranged chronologically or according to discursive aspects; rather, it was the production process and its development that became the exhibition's focus.

The resulting work combined architecture, sculpture, music, photography, film and theater and inspired a younger generation of artists and curators to create new exhibition forms; participants included Liam Gillick, Dominique Gonzalez-Foerster, Pierre Huyghe, Tino Sehgal, Rirkrit Tiravanija and Xavier Veilhan. "Theatergarden Bestiarium was a milestone in the history of exhibitions. Particularly notable was that the exhibition invented a new way of exhibiting. Richard Hamilton once said to me: One only remembers exhibitions that embark on new paths. 'Theatergarden Bestiarium' is a perfect example of such." (Hans-Ulrich Obrist)
The concept combined projections and reflections through which the visitor moved as both an observer and actor. The mixture of paths, plants, sculptures, fountains, lakes and caves used in the formal Baroque garden awaken in the mind of the beholder stories and myths, a so-called "theater of memory". Rüdiger Schöttle wrote of a garden that is "both a window into the past and into the future".

"Theatergarden Bestiarium" is an oversized plateau of hills, valleys and lakes. Pictures of historical paintings and film stills are projected onto the landscape from above.

The visitor is received by the artwork "La Scala", by the artist duo Fortuyn/O'Brien, which suggests entry into an unreal place. An empty display case follows. The case's sides reflect the objects and projections in the garden. Lying in front of the display case are pieces of a human skeleton, "Valor Impositus" by James Coleman. This case stands at the beginning of two avenues: the visitors - the "beasts" - travel these paths through the park. The display cabinet represents the votive or commemorative columns that often stood at the entrance of Baroque gardens. With this combination of display case, reflection and skeleton, Coleman wishes to inscribe a Memento Mori on the heart of the "Theatergarden".

Visitors will find three different theaters, which reflect the different stages of theater design: The work of Jeff Wall is a three-dimensional upright floor plan of a Baroque theater and is reminiscent of an office building. "The Baroque concept of a loge or box theater embodied the historical moment of transition between courtly society and the bureaucratic state." (Jeff Wall)

The "Cinema Theater" by Dan Graham is a combination of a movie theater and a garden theater. The projection screen is replaced by double sided mirrored glass, which also serves as the stage backdrop for the garden theater situated in front of it. Presented on it is the film "The Rise of Louis XIV" by Roberto Rossellini. Rodney Graham refers to the theater of antiquity with his "Circus Gradivus."

The "Theatergarden" combines mountains and valleys en miniature designed by Christian-Philipp Müller; vegetable gardens by Alain Séchas; a prompter's loge, reminiscent of a grotto, by Juan Muñoz; drops of water that look like lakes by Hermann Pitz and the tribune-like waterfall "Garden View - The Waterfall - Coutyard View" by Marin Kasimir. Ludger Gerdes' slide projections depict views of the gardens at Schwetzingen Palace and are superimposed by typed words.

A composition by Glenn Branca accompanies the "Theatergarden". The conductor's stand "Antiphonaire" by Bernard Bazile refers to the garden's orchestration.

Following its premiere in P.S. 1, "Theatergarden Bestiarium" was presented six more times and each performance was adapted to the spatial conditions of its exhibition venue; these included the Teatro Lope de Vega in Seville, Chateau d'Oiron, the Le Fresnoy / Studio National des Arts Contemporains and the Pont du Gard. In the 2008 exhibition at Le Fresnoy the installation was completely restored and reconstructed. In 1990 France's Centre national des arts plastiques (CNAP), France purchased the entire installation.

Twenty-five years after the creation of the original version by Rüdiger Schöttle and Chris Dercon, "Theatergarden Bestiarium" is on view in Munich for the first time. The exhibition is an expression of mutual appreciation before Chris Dercon's departure to the Tate Modern in London, as well as the conclusion of a series of exhibitions in Munich as an art city: Made in Munich. Editions von 1968 bis 2008 (2008), "Die Kraftprobe". 200 Jahre Kunstakademie München (2008), Ein Blick für das Volk. Die Kunst für Alle (2006) and Die Götter Griechenlands. Peter Cornelius (2004).