Charlotte Moth in 'Noting thoughts' has developed a new work for her first monographic exhibition in a French institution that departs from a personal collection of photographs called the Travelogue which began in 1999. 'Collection: 25 years and a spring' celebrates the Museum of Rochechouart's 25th anniversary. This will be an exhaustive panorama of Rochechouart's 270 works by 100 artists. Raoul Hausmann presents 'Language takes its revenge to the poet'. 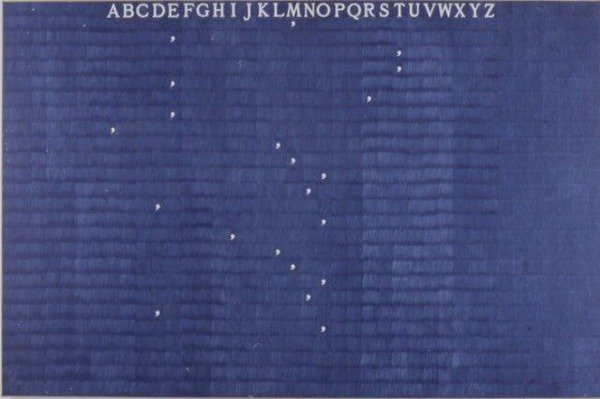 Charlotte Moth (1978, UK) has created over the past ten years a body of work that is essentially photographic but emerges primarily through the experience of sculpture, architecture and cinema.

Moth has developed a new work for her first monographic exhibition in a French institution that departs from a personal collection of photographs called the Travelogue which began in 1999. The name of the Travelogue evokes the hybrid and open nature of this undertaking, as much as its itinerant approach and potential cinematographic activation. The Travelogue includes architecture, landscape, decorative elements, spaces and details, the obsolescence of which are at times pronounced, at others latent. Fragmentary in nature, this collection remains open in its possible extensions and also in its usage. Therefore it is constantly revisited by the artist for the making of new works and also used as a tool to engage third parties in dialogues.

When invited by the Museum, Moth was inspired by the archives of Raoul Hausmann (1886-1971) which are held at Rochechouart. This research lead to the discovery of the Dadaist’s stay in Ibiza between 1933 and 1936 and sent Moth on a journey to the Spanish island this winter resulting in an enrichment of the Travelogue. These photographs are recombined with older images and laid out in response to a text written by Alice Peinado who studied anthropology at Columbia University in New York in the 1980s, before moving to Paris in 1992 to explore notions of national identity and citizenship through an analysis of the plight of second generation immigrants under deportation injunctions.

The Travelogue and the Hausmann archive were used by Peinado as points of departure to trigger the possibilities of a text in the context of this invitation. Insularity, habitation, the appearance of forms and their transformation are themes that allow the construction of images in space to be set against this text in various configurations unfolding on a series of tables. Rather like islands themselves. Allowing Moth to fix in time and space a strata of thinking, akin to the activity of "noting thoughts'".

Based on the relation between images and texts and their reciprocal activating, this installation further develops research present in The Absent Forms—another work by Moth purchased by the Museum last year—that will be exhibited at the same time.

In parallel with "Collection: 25 years and a spring", the year 2011 celebrates the Museum of Rochechouart's 25th anniversary. Created in 1985 by the Conseil général de la Haut- Vienne. To mark this occasion the contemporary collection will be displayed in a series of hangs. This will be an exhaustive panorama of Rochechouart’s 270 works by 100 artists. Dating from the 1960s to today, the selection shown here particularly reveals the renewal of form, technique and materials in this period. The subjectivity of these choices has always been claimed by the different curators who have acquired work for the collection. But these choices came about in a context drawn by the works themselves. The three founding collecting strands (landscape, imaginary, history) have remained the guiding themes in the constitution of artistic groupings (interrogating the status of painting, the sculpture revival, the rapport between art and culture, myth and narration, the moving image…).

Since the late 1980's, the establishment of the Raoul Hausmann collection (over 700 artworks and the archives) has informed the entire Museum. The Dadaist was one of the main figures of the 20th century in his quest to surpass art and the links between art, personal subjectivities and collective consciousness, characteristics that run from Dada to the most contemporary work. Until the first part of this survey is a display gathering all the works bought in 1985, the reinstallation of a work by James Turrell, new acquisitions and a presentation highlighting Raoul Hausman’s use of poetry and lettering.

The Musée départemental d'art contemporain de Rochechouart is an initiative of the Conseil général de la Haute-Vienne, France. This exhibition was made possible through the support of the Minister of Culture (DRAC Limousin) and Fluxus, a Franco-British Fund for Contemporary art.

Raoul Hausmann
"Language takes its revenge to the poet"

Raoul Hausmann dates his first abstract poem to 1918. fmsbwtö is not a text articulating new or incomprehensible words but in fact an “act of breathing and oral associations which are inseparably linked to the time sequence […] (of the poems) and based on letters; there is no longer any potential to create a language with a sense of coordinated sequence”.

Contemporary to the Berlin Dada manifesto of which Hausmann was one of the founders, this outcome was dictated by the necessity for destructive radicality. In the years that followed, Hausmann’s interest for phonetic poems never ceases to grow. He develops it jointly with Kurt Schwitters (1887-1948) who was in fact inspired by Hausmann’s antecedents for his Ursonate. Later it was from the convergence of light and sound that the “optophone” emerged and with it the desire to physically feel the sound.

Typography, poetry, diction, typescript, manuscripts, collage and painting were the modes the artist experimented with all his life to “find the new primordial signs”. From avant-garde prints to “optophonetic” poems via the later canvases, this selection from the archives and the works in the Raoul Hausmann collection is devoted to this research.