The exhibition considers how artists - including Cory Arcangel, Tauba Auerbach, Bureau of Inverse Technology, I/O/D, JODI, Nam June Paik, Sterling Ruby, and Kerry Tribe - map the systems that impact upon us. Embracing errors and the irrational or redeploying technology, some artists directly abstract from cityscapes, some employ planetary metaphors, while others use abstract forms to figure how systems succeed and fail. 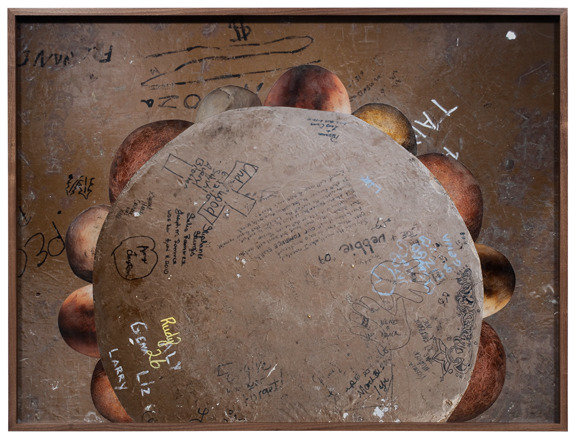 As the highway rapidly connected people in new ways, it became a metaphor for modernity, progress and enlightenment. Less acknowledged was the highway’s negative impacts; it divided people from their downtowns, riversides, amenities, and one other. Highways Connect and Divide considers how artists – including Cory Arcangel, Tauba Auerbach, Bureau of Inverse Technology, I/O/D, JODI, Nam June Paik, Sterling Ruby, and Kerry Tribe – map the systems that impact upon us. Embracing errors and the irrational or redeploying technology, some artists directly abstract from cityscapes, some employ planetary metaphors, while others use abstract forms to figure how systems succeed and fail.

NAM JUNE PAIK coined the term “electronic super highway” in 1974 to conjure the communications technology landscape of the future. Beatles Electroniques (1966-72) documents his manipulations of a TV broadcast of the Beatles’ A Hard Day’s Night (1964) where he used a magnet to disrupt the televised image, creating semi-abstract and completely abstract images that seem to make visible the electronic connections behind the sound and images of the mass media.

CORY ARCANGEL wittily confounds the relationship between technology and culture. Arcangel’s Timeless Standards / Real Taste installation comprises a series of scans of a Mondrian-like sports-shirt design, and a modular, Coke Zero-filled humidifier. With the prints we experience a transformative journey from the city that Mondrian originally drew inspiration from, to his abstracted paintings, to the appropriated commercial designs, and then finally to Arcangel's semi-abstractions; while Real Taste, irrationally repurposes the hi-tech drink as fuel for a contemporary machine whose design concept seems to be a re-imagined 1950s modernity.

TAUBA AUERBACH explores randomness and precision in the details of systems of patterning and typography. Her Shatter series mixes chance – the shattering effect of broken glass to determine the structure of the image – with a purposefully ordered application of black and white paint. The results appear as clusters of radials, like a display of the nodes of an organic network, or a view of suburbia from the air.

BUREAU OF INVERSE TECHNOLOGY (BIT) is a group that playfully intervenes with new technologies in order to reveal the fact and fiction of corporate innovation. Their BIT Plane video (1997) poetically documents the journey of a mini-spy plane as it flies above the headquarters of the biggest computer and technology companies in Silicon Valley - “into the glittering heartland of the Information Age.”

I/O/D were pioneers of Internet art in the 1990s. Their I/O/D 4: The Webstalker (1997) uses nascent web crawler technology to map connections across the Internet in real-time, creating constellations of links within a radical browser application that acts as a kind of electron telescope of the hidden data of outlying cyberspace.

JODI are provocateurs who make art from the modification and disruption of software and operating systems, and the glitches within video-games. In the spirit of Paik’s early TV experiments, their Geo Goo (2008-2011, ongoing) revels in error by radically disrupting Google maps. The platform seems to go mad with flowing icons, sharp zooms in and out, wild pans, and disorienting multiple perspectives in Street View.

STERLING RUBY explores technologies of control – within psychology, biology, art and architecture - and mechanisms devised to counter them. He often designs formal systems in order to expose the psychic structures that underlie social phenomena. His collage Existentialists 2 (2010) presents an arrangement of skulls around a circular shape that resembles a primordial mapping of the planetary system. The formation seems to have been long abandoned: it is covered in the graffiti and tagging common to highway underpasses and public parks.

KERRY TRIBE’s films, videos and installations explore memory, imagination, and subjectivity. Her North is West / South is East (2001) is a unique account of a metropolis: random people at LA airport – some who had just flown there for the first time - were asked to draw their map of the city. The drawings are then placed in a clustered configuration on the gallery wall. As Tribe has said, “Taken together these chance encounters begin to describe a place at once real and imagined.”

BUREAU OF INVERSE TECHNOLOGY (1991) was formed in Melbourne, Australia by engineer and theorist Natalie Jeremijenko, radio journalist Kate Rich, and artist Daniela Tigani. BIT was incorporated in the Cayman Islands in 1992. BIT was originally constructed as an anonymous group, a guerilla technical intervention into some of the emergent techniques and technologies of the Information Age. Exhibitions include: Whitney Biennial of American Art, New York (2006); ZKM, Karlsruhe, Germany (2001); Postmasters, New York (solo)(1999); and the Whitney Biennial of American Art, New York (1997).

NAM JUNE PAIK (Seoul, Korea, 1932 – Miami, FL, 2006) studied at the Universities of Tokyo, Munich and Cologne; and the Conservatory of Music, Freiburg, Germany. From 1958-63 he worked with Karlheinz Stockhausen at the WDR Studio fur elektronsiche Musik, Cologne. His first solo exhibition was Exposition of Electronic Music — Electronic Television in Wuppertal, Germany (1963). In 1982, the Whitney Museum of American Art, New York organized a retrospective of videotapes, video sculptures, installations and performances, which traveled to the MCA, Chicago. He exhibited with Hans Haacke in the German Pavilion at the 1993 Venice Biennale. The Worlds of Nam June Paik retrospective opened at the Solomon R. Guggenheim Museum, New York (2000) and traveled to Bilbao, Spain and Seoul, South Korea.

The exhibition developed out of an exchange of ideas about art and technology with representatives from the Leonardo Education and Art Forum (LEAF), assembled for the upcoming College Art Association (CAA) conference The February 10 reception and performance is a CAA listed event.