Performance, dance, film, and video are the mainstay of the seven-week program, which will be shaped each week by a different international artist and his or her guests. In addition to talks, music is a further focus of Globe. With Apparatjik, Ei Arakawa, Cao Fei, Keren Cytter, Rabih Mroue', The Otolith Group, Tobias Rehberger... 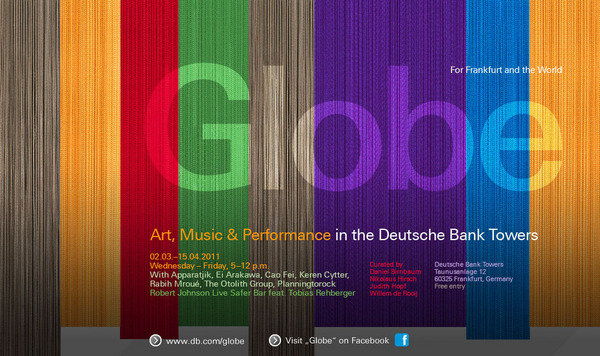 The title of the art program to be held in the temporary art space in the Deutsche Bank Towers in Frankfurt triggers two associations: globalism and the famous London Shakespeare theater. Accordingly, the events are different kinds of performing arts.

Performance, dance, film, and video are the mainstay of the seven-week program, which will be shaped each week by a different international artist and his or her guests. In addition to talks, music is a further focus of “Globe”. The project room is situated on the ground floor of the Towers and opens to the public as of Wednesday to Friday from the early evening to midnight. The individual events will shape the character of the space. The spectrum ranges from a café and video lounge to a theater and club.

The event series celebrates the reopening of the Deutsche Bank Towers. Following three years of modernization, the building is not only state-of-the-art in terms of sustainability, but also stands for openness and innovation. Presenting a wide variety of art in a clearly structured manner, the Towers offer access to a world of art which, particularly in the twenty-first century, reflects global thinking, creativity, and courage for the new values which have decisively influenced Deutsche Bank´s self-image and will continue to do so in the future.

The “Globe” program is curated by an international renowned team, including Daniel Birnbaum, who was the director of the 2009 Venice Biennale, is now the new director of the Moderna Museet in Stockholm, and until recently was the rector of the Städelschule, the Frankfurt based fine arts academy; his successor in Frankfurt, the architect and art theoretician Nikolaus Hirsch; as well as the artists Judith Hopf and Willem de Rooij, both of whom teach at the Städelschule.

The interior design for “Globe”, created by Nikolaus Hirsch and Michel Müller, contrasts the rough surface of the concrete with colorful furniture and curtains. This color mood alludes to the color code of the art concept of the Deutsche Bank Towers, where each color stands for a different region – Asia / Pacific, the Americas, Middle East / Africa, Europe, and Germany.

Tobias Rehberger, who won the Golden Lion at the 2009 Venice Biennale and is a professor at the Städelschule, designed the bar. The operator of the Live Safer Bar is the Robert Johnson team, Frankfurt.