In "Depiction of a Star Obscured by Another Figure", the artist invokes ideas of a never experienced memory, a theme she has threaded throughout her previous work. In this exhibition, the artist for the first time emphasizes sculpture independent of her video installation. De Beer here examines the surface of the projection screen as a space through which one may explore reflection and memory as well as dreams and hallucinations. 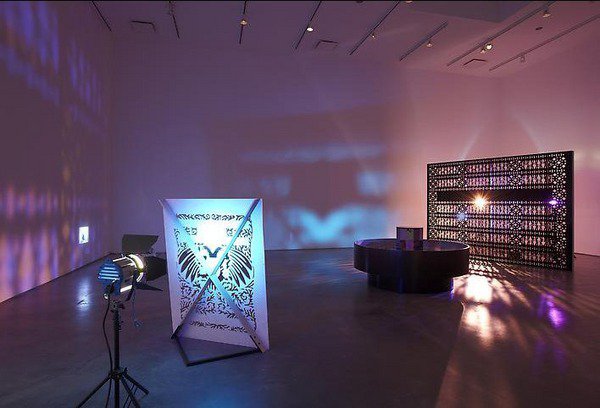 Marianne Boesky Gallery is pleased to present an exhibition of new work by Sue de Beer. This is the artist’s second New York solo show at the gallery and follows the artist’s recent debut of her new film The Ghosts at the Park Avenue Armory presented by Art Production Fund.

In Depiction of a Star Obscured by Another Figure, de Beer invokes ideas of a never experienced memory, a theme she has threaded throughout her previous work. To quote one of de Beer’s early characters from her film Hans & Grete, 2002; “Sometimes, you remember places you have never been, or people you have never met.” In this exhibition, the artist for the first time emphasizes sculpture independent of her video installation. De Beer here examines the surface of the projection screen as a space through which one may explore reflection and memory as well as dreams and hallucinations. The screen itself may act as a blank, a void for such activations and projections.

The artist’s installation is comprised of a series of sculptural works punctuated by video, where de Beer employs the physical properties of light to affect the viewer’s vision as the space is navigated. Combining cinema lights with perforated screen sculptures, de Beer allows the viewer to become his own eclipse as he moves past and amid the objects, simultaneously blocking and revealing the light which in turn casts its own shadows of the patterned partitions. Interspersed among the screens is a film that has been edited to produce ‘persistence of vision’ – the phenomenon of the eye by which an afterimage is thought to persist for approximately one twenty-fifth of a second on the retina, either literally through an optical echo, or metaphorically through a sound or image.

Further modifying the space and playing upon notions of vision and perception, de Beer incorporates a dropped ceiling in the front gallery, a previously-used device in her practice. And in a nod to her earlier dream-machine sculptures and investigations into the ‘optical unconscious,’ the artist here includes a modified praxinoscope sculpture inspired in part by Charles-Emile Reynaud’s and his Theatre Optique. The sculpture feels at a standstill, the movement of the previous dream-machines nowhere to be found in this pause. The combination and placement of the patterned screens, theatrical lighting, film objets and the incorporation of video encourage a phenomenological experience of the work. The artist aligns elements of repetition, saturated lush colors, dramatic lighting, and cinematic devices, to expertly construct a visual narrative that is dream-like, engaging, haunting and coolly stylized.

Sue de Beer lives and works in New York. De Beer collaborated with Andy Comer for the project Radio Play, at The Kitchen in October 2009. Her work Permanent Revolution was shown at MuHKA Museum in Antwerp in 2008, curated by Dieter Roelstraete, and the artist was included in the group show Alpha Omega-Works from the Dakis Joannou Collection at the DESTE Foundation for Contemporary Art in Athens in 2010. De Beer will present a new project in Marfa, TX in collaboration with Shamim Momin and Los Angeles Nomadic Division in 2011.

For further information or images, please contact Annie Rana at 212.680.9889 or annie@marianneboeskygallery.com.