Each of these artists, Ruth Claxton, Amy Cutler, and Runa Islam, creates precisely rendered, yet enigmatic compositions that exhibit a self-conscious awareness of the formal structures respective mediums of sculpture, painting and film. Although the exhibitions were developed distinct, the juxtaposition of these artists' works reveals a strong visual resonance. Their interest in form, color, line, phenomenological engagement. 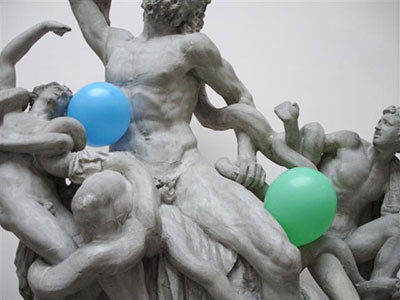 SITE Santa Fe is pleased to present three solo exhibitions by the artists Ruth Claxton, Amy Cutler, and Runa Islam from February 5 - May 15, 2011. There will be a media preview and walkthrough with the artists on Thursday, February 3, 11 am. The free public opening is Friday, February 4, from 5–7 pm.

Each of these artists, Ruth Claxton, Amy Cutler, and Runa Islam, creates precisely rendered, yet enigmatic compositions that exhibit a self-conscious awareness of the formal structures respective mediums of sculpture, painting and film. Although the exhibitions were developed distinct, the juxtaposition of these artists’ works reveals a strong visual resonance. Their interest in form, color, line, phenomenological engagement, and, in some cases, the employment of similar motifs, creates a suggestive visual conversation.

Ruth Claxton creates dynamic sculptural environments that employ a diverse range of tactics to question perception. Claxton assembles large, elaborate, multi-dimensional structures from metal hoops, circular mirrors, and colored glass disks. These structures are site-responsive and simultaneously serve to construct the viewer’s interaction with the exhibition space and provide an environment for the figurines nestled within them. The multiple reflective surfaces engender an instability that belies the sturdy metal structures that support them.

Claxton seeks out collectible porcelain figurines that are common in many English homes. These tiny sculptures depict a variety of leisure related subjects from birds to ballerinas; some appear to have stepped out of 18th century paintings of fêtes galantes. Through the application of beads, buttons, sequins, ribbons, blown glass, and other materials, Claxton eradicates the figures’ sight. The choice of materials makes this blinding playful rather than sinister, and Claxton purports that the figures portrayed are enraptured, not traumatized by their interrupted vision. This sense of disorientation is increased when the figurines are placed within Claxton’s maze-like structures.
Claxton is creating a new room-sized installation in one of SITE’s 4,000 square foot galleries for this exhibition, the artist’s first solo show in the United States. This work, Synthetic Worlds, represents an expansion of the artist’s current experiments with larger scale. This installation will cascade from the ceiling, activating the entire gallery space.

Amy Cutler’s meticulously rendered paintings on paper conjure unusual worlds predominantly inhabited by women. The women who populate Cutler’s paintings are often similarly dressed and engaged in enigmatic activities such as mending tigers or awkwardly carrying mysterious loads through semi-bucolic landscapes. Though they seem to invoke fantasy worlds, Cutler’s compositions are grounded in the exploration of interior states and are inspired by the complex web of emotions generated by real-life situations.

Cutler’s compositions are often concentrated against a stark white background, which imbues them with a sense of timelessness and indeterminacy of place. This ambiguity is heightened by Cutler’s embrace of a variety of visual references including Indian miniature paintings, US Army manuals, and the costumes and textiles of diverse cultures and time periods, which she depicts with great detail and specificity. For Cutler, the non-communicative expressions worn by her characters are indicative of their inward looking nature. Her women are engaged in self-examination and self-reflection of which the entire composition becomes a metaphor.

SITE’s exhibition brings together an exemplary selection of over twenty works created during the last decade by the artist, many lent by private collections around the country.

Cutler participated in the 2004 Whitney Biennial and has had solo exhibitions at the Museo Nacional Centro de Arte Reina Sofía, Madrid and the Indianapolis Museum of Art, among others. Her works are in the collections of the Museum of Modern Art, New York, Whitney Museum of American Art and the Walker Art Center, Minneapolis. She lives and works in Brooklyn, New York.

For more than a decade, Runa Islam has created 16mm and 35mm films and film-based installations that are generated from an interest in avant-garde film history, theories, and structures of filmmaking. Islam constructs poetic compositions that exhibit a precise attention to formal details and an open narrative structure. Her works are presented in carefully crafted installations and configurations that foreground an interest in the apparatus of film-viewing experience. More often than not, Islam presents her works on film, rather than as digital transfers, highlighting the importance of the medium for her practice.

For her exhibition at SITE, Islam will present three works created within the last ten years: How Far to Fårö (2004-2005), What is a Thought Experiment, Anyhow? (2007), and The Restless Subject (2008). This selection includes single, two and three-channel projections and points to Islam’s dialogue with the history of moving image devices and work of avant garde film directors. These works engage in a cohesive visual dialogue while showcasing the variety of Islam’s practice. Runa Islam’s work was included in the 2005 Venice Biennial and the 2003 Istanbul Biennial, and she has had solo exhibitions at UCLA’s Hammer Museum, the Serpentine Gallery, London, the Musée D’Art Contemporain de Montréal, and Museum of Contemporary Art, Sydney among others. Islam lives and works in London.

SITE Santa Fe is located at 1606 Paseo de Peralta, Santa Fe, New Mexico 87501.
Hours: Thursday and Saturday, 10 AM–5 PM; Friday, 10 AM–7 PM; Sunday, 12 PM–5 PM; closed Monday-Wednesday. The museum is open on Wednesday, 10 am – 5 pm in summer.
Museum admission is $10 for adults and $5 for students, teachers, and seniors; members are free. Free admission is offered on Fridays, made possible by a grant from The Brown Foundation, Inc., of Houston.
Tours by SITE Guides are available free of charge to the public and are also regularly scheduled on Fridays at 6 pm, and Saturdays & Sundays at 2 pm.