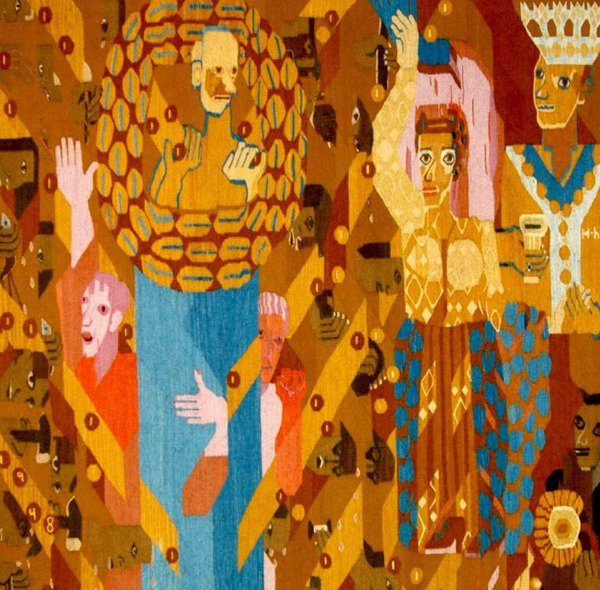 Kunsthall Oslo is very pleased to present the extraordinary work of the Swedish/Norwegian artist Hannah Ryggen (1894–1970). The Human Pattern, centred around eight weavings made during a fifteen-year period spanning WWII, is the first major exhibition of Ryggen's work in Oslo since 1986. Around this retrospective we have placed a constellation of works by artists who share aspects of Ryggen's concerns. These are works that might not otherwise be seen together, only some few of which bear Ryggen's direct influence, but which are interconnected in light of her practice. Our aim is to expand the context in which Ryggen's work might be considered, and to respond to a growing acknowledgement among younger artists and art historians that her themes and methods are once again relevant to contemporary practice.

Hannah Ryggen's solo exhibition at the Moderna Museet, Stockholm in 1962 was both a critical and popular success, and she represented Norway at the Venice Biennial in 1964. Nevertheless, her work remains little known in the wider world, and even in Norway her place in the canon of modern artists has never been secured. Ryggen's practice sometimes appears as a footnote to the fable of her life, and the popular version of her story portrays her as something of a naïf, working in rural remoteness on the Norwegian west coast. But Ryggen had an academic painting education and, along with her husband, the painter Hans Ryggen, closely followed the artistic developments of the European avant-garde. Despite her pacifism, she supported the war against Franco, was an activist in the Norwegian communist movement and a feminist before the word was coined; her work shows an equally keen awareness of both Expressionism and geopolitics.

Ryggen's political commitment is demonstrated in tapestries dedicated to the executed German communist dissident Liselotte Herrmann (Lise Lotte Hermann halshuggen, 1938) and to the imprisoned left-wing humanist campaigner and Nobel Peace Prize-winner Carl von Ossietzky (Drømmedød, 1936). Equally, these works underline Ryggen's belief in the importance of individual agency in the historical struggle. Her 1948 weaving En Fri (sometimes translated as 'Freedom', but more literally and more appropriately, 'A Free One') depicts aristocratic figures on pedestals surrounded by the half-seen grey faces of hammer-wielding workers, the whole composition tied together by a geometric golden band. In a short poem-like text describing the work, Ryggen writes: 'The human pattern – we all are trapped in / some grey figures bend their backs and work while we sleep / some wear medals and stand above us all / hand in hand with their ancestors...' But there is one figure, on the lower right of the weaving, who is not caught up in the golden band. 'One of the grey figures stands up and looks at it all. He is as free as one can be.'

The artworks we have assembled around Ryggen's weavings follow three broad lines: works by Ryggen's direct contemporaries - including Pablo Picasso, Claude Cahun and Gerd Arntz - who shared her political position in direct opposition to the rise of European fascism, but who came from very different backgrounds and offered very different artistic responses; works that touch on the development of modernist abstraction in Norway, from Anna-Eva Bergman to Gunnar S. Gundersen and Olav Christopher Jenssen; and works that belong to a post-sixties conception of contemporary art and extend Ryggen's concerns in new directions. Some of these are made by artists who acknowledge a direct debt to Ryggen, for example Charlotte Johannesson or Ann Cathrin November Høibo. Others develop methods or themes found in Ryggen's work – Kirsten Justesen's feminist approach to the attempt to reconcile class struggle with family life, for example – or reconnect contemporary art politics with early-twentieth century idealism, as in Ruth Ewan's agit-prop posters promoting the works of the humanist campaigner Gustav Spiller.

'I am a painter, not a weaver; a painter whose tool is not the brush, but the loom.'

It has been said that what made Ryggen's work unique in 20th century Norwegian art was her decision to approach the practice of weaving with the serious intent of a modern painter, transforming her textiles into artworks as she did so. It is equally productive, however, to see this process from the other side. Ryggen's adoption of the handloom came at an unfashionable moment, just as machinic modernism had swept aside the expressionist rearguard of the radical arts and crafts movement. But Ryggen had found a medium in which she could synthesise her particular concerns without compromise, freed from the constraints of academic technique, and directly connected to everyday life in a way that painting never could be.

Ryggen's painting education under the Danish painter Fredrik Krebs, and the awareness of medieval tapestry and its arts and crafts interpretations evident in her early weavings, together brought an understanding of narrative and allegory. Early modernism offered new solutions to the figure-ground problem, and uses for abstraction very different to those in traditional woven patterns; the metaphorical and formal integration of flattened individual figures into the overall fabric of the work would become one of Ryggen's characteristic strategies.

Of equal importance, however, is the way that the practice of weaving offered a direct connection to her personal politics, both as domestic labour and as a medium for the expression of dissent. An early tapestry depicts a May Day workers' march, tiny woven figures carrying tiny woven approximations of banners. For a time in the mid-1930s she worked with long, horizontal, earth-toned hangings, their central events subordinate to a strict, linear composition. But by the end of the 1930s, her works had themselves taken on the format of marching banners. Paintings, perhaps, but paintings that spoke of a possibility that pure painting could not access, works that one could imagine being carried high in a May Day parade.

The Human Pattern has been curated by Marit Paasche and Kunsthall Oslo.

The exhibition opens on Friday 4th March at 19.00

Kunsthall
Trelastgata 3 0191 Oslo
open from 11am-5pm Wednesday-Friday, and from 12pm-5pm on Saturday and Sunday.