This retrospective of George Sugarman's career presents a small portion of his work; a selected few of his sculptures, drawings, and collages from the late 1950's and 1960's are exhibited here. 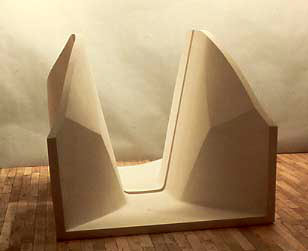 â€œYellow to White to Blue to Blackâ€

"I hide the formal qualities and let people get directly in touch with the work on that level. I don't have to worry about is the rhythm right, is the color right? I approach a work of art in formal terms, yes, but I've gotten to the point where I think the art in art is to hide the art. The content is part of the form. There is something more than just the formal qualities. Content is more than meets the eye."
- George Sugarman, 1986

This retrospective of George Sugarmanâ€™s career presents a small portion of his work; a selected few of his sculptures, drawings, and collages from the late 1950â€™s and 1960â€™s are exhibited here. The presenting of these different media together is a way to explore the correlation that exists between them, providing a clearer impression of the artistâ€™s ideas. Although a result of previous experimentation, this art represents a transitional period when Sugarman began creating outdoor sculpture. Georgeâ€™s former use of texture and varied color transformed into refined, smooth, and solid surface, a preview of his future public projects.

George Sugarmanâ€™s (1912â€“1999) art has an edge, prevalent in the sculpture, drawings, and collage one sees at this exhibition. His exclusive use of form and color is jarring yet understandable, abstractly asking, innocently inquiring, â€œWhat is our relation to the undefined object?â€ The answer is personal, really unnecessary, since these creations have a voice of their own. Sugarmanâ€™s artworks rebel against the environment of which they sustain, drawing upon structure for improvisation. As with, â€œYellow and Whiteâ€, a sculpture made of two parts that, aside from color, mirror each other, a unique cohesion exists, a type of balancing act, wherein the combination of geometric architecture and rhythm underlies beaconing free form expression. This Rorschach-esque object is only a partial cipher, deploying and destroying at once, emitting mixed signals that indicate a resolved but ongoing conversation.