In his art, Andro Wekua combines collective and personal memories into poignant, in part disturbing representations. The gloomy and uncanny as phenomena and fear as a symptom of the human psyche play a big role in Wekua's works. The work of Nina Canell attempts to activate an intersection between humans, objects and events whereby a certain kind of material imagination might be articulated. 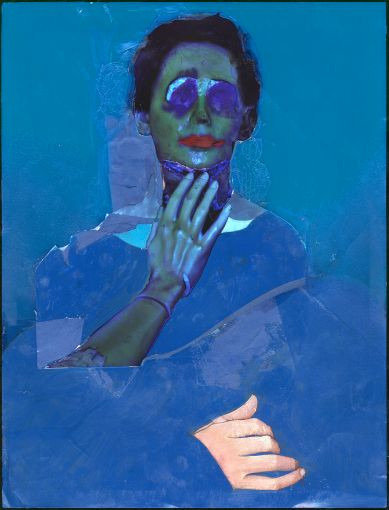 In his art, Andro Wekua combines collective and personal memories into poignant, in part disturbing representations. The gloomy and uncanny as phenomena and fear as a symptom of the human psyche play a big role in Wekua’s works. He purposefully uses formal devices – often well known patterns from the horror film genre – to create a narrative structure that evokes corresponding feelings. Wekua grew up in the former Soviet republic of Georgia and was driven out of the country in the course of the Civil War. In his installations, collages and films, pictures repeatedly flash up that are related to this aspect of his life. Personal aspects in his work, however, only serve as an illustration enabling him to raise more general questions about universal truths. What happens when our subjective memories mix with foreign images? When we try to fill gaps in our memory with historical or contemporary documents? Or when fantasy provides the cruellest of answers? The last question revolves around the psychology of “getting the creeps” and corresponds to a popular stylistic means of Wekuan scenographies.

In his pictorial works, Wekua combines motifs he finds in magazines, on the Internet or in photo albums in painterly fashion and with pastings into multi-layered, kaleidoscope-like collages. Experiences and lore overlap on a visual and narrative level. He also applies this technique in his sculptures, installations and particularly in his films and videos. His often dramatically presented installations attest to a tendency towards the narrative: naturalistically reproduced albeit alienated figures seem to be frozen in situations – similar to a video still – revealing only a moment of a more complex whole. Characters from his installations appear as protagonists of his filmic works. Wekua collages by using figures of his earlier works, taking pictures out of their context and putting them in a new structure. The new elaborately produced film that will be shown at the Kunsthalle Fridericianum testifies to this principle. Never Sleep with a Strawberry in Your Mouth is a filmic collage that brings together images from memory with the narrative logic of the horror movie.

At Kunsthalle Fridericianum, Andro Wekua is presenting for the first time Pink Wave Hunter, a work group that conjures up the heavily destroyed and abandoned buildings of Sukhumi, the city in which he was born. In 15 individual architectural models, he combines his memories dating back 17 years with information gained from research on the internet and photo exchanges with other exiles. The fact that these are not faithful reconstructions, but highly subjective constructs, is revealed not only by the visible “memory gaps” – for example, when a sculpture shows only the façade of a building because the memory was not sufficient for the rest. The choice of materials, which differs with each building, also seems to be subjective and above all emotional. His selection of buildings is based on their personal relevance to him, on the one hand, and on their general popularity on the other. Wekua points to a fundamental problem here: we can view the past only through the distorting mirror of subjective memory, inextricably entwined with collective memory and the ideal images that superimpose themselves on repressed memories. When we envision the past, we always apply it to the present. Wekua visualizes these pictorial layers of memory with an acute sense for the repressed that he conjures up in his work. This is also apparent in the older video work Sicut Lilium Inter Spinas (2003), which when viewed together with the new film seems to anticipate the latter, which, for its part, intensifies the images and additionally boosts their intensity with horror film-like narration. The exhibition also includes paintings, collages and sculptures which, in typical Wekua fashion, appear as mysterious figures whose context unfolds in the imagination depending on the viewer’s past experience and is only hinted at in its outlines.

In collaboration with the Kunsthalle Wien and the Castello di Rivoli in Turin, a three-volume catalogue published by Verlag der Buchhandlung Walther König, is being produced to accompany the exhibition.

The word magnetis was first applied to the loadstone by the tragic poet Euripides (480-405 BC). Pliny states that a shepherd, Magnus, was pasturing his flock on Mount Ida in Crete when the nails in his sandals and the iron tip of his staff became so strongly attracted to Earth that he could not move. He began digging to ascertain the cause and found a wonderful stone – which he called after himself.
Pliny, Historia Naturalis, 1507

The work of young Swedish artist Nina Canell attempts to activate an intersection between humans, objects and events whereby a certain kind of material imagination might be articulated. Her installations posit themselves as testing grounds – imitating, misinterpreting or reinventing elements of the natural world – proposing intimate bonds in our existing as well as fictive vicinity.

With her solo exhibition Ode to Outer Ends at the Kunsthalle Fridericianum, Nina Canell pays homage to the inconspicuous, propelling the invisible and the tiny in order to upset the reliability of any finite form. A certain affinity for peripheral moves and transitions brings forth a group of sculptural works, which by way of accumulation produce modest material crossovers and complicates our conception of proximity and distance. Taking its cue from the last musical passage of Gustav Holst´s Neptune, the Mystic from 1916 (in which Holst supposedly conceived of the first intentional 'fade-out' in music), Canell has added a succession of doors between the two exhibition rooms of Kunsthalle Fridericianum's east wing. Holst's original score instructed a small female choir to be situated in a room adjacent to the auditorium, while the door was to be gradually and silently closed "until the sound was lost in the distance". By borrowing and attaching proximity sensors to Holst's mechanical prop, Canell's double-ended vestibule elongates the transition between the extremities of the rooms, indirectly bringing the viewer into that very space of transitory conversion which so often appears at the heart of the artist's objects and assemblages.

Her objects can be seen to apply their own logic of radiation in which electromagnetic shifts often act as deliberate happenings whether channeled through an array of crude conductors such as nails, cable-ends, bits of wire and scraps of metal, or discretely bypassing human perception all together. A kind of hidden affection seems to be at work, connecting human consciousness to objects and phenomena in an almost prose-like manner. The electromagnetic nature of thinking itself is a spry component in Canell's work, meticulously mapped in her comprehensive new work Impulse Slight (2011) as a pliant fluid, embodied by thousands of watermelon seeds. There is a dedicated principle in place, firmly embodying the assertion that “the form of a given thing is the outcome of the happenings it endures” – a position that places sculptural emphasis on conductive relations, shifting attention from its material aspect to that which is embedded or activated by a stream of occurrences.