This exhibition presents works of exclusively female artists in the historical and domestic rooms of Marres. Several themes will be addressed: the female dandy, visible and invisible gender roles, the political implications of design and reflections on the interior as a form of social critique. The interior is approached - physically, artistically, literary or mentally - as a domain of emancipation and dissidence. Marres takes part in the Made In Europe Filmfestival presenting a selection of films of the Belgian artist Sven Augustijnen (1970). 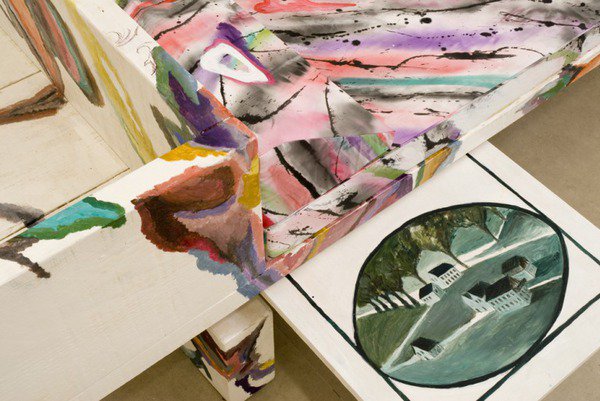 As part of the program on the Avantgarde, Marres presents Madame Realism, a group exhibition where the interior once again takes a central place. Madame Realism presents works of exclusively female artists in the historical and domestic rooms of Marres. The presentation refers to both the private domain of the interior and the public space of an exhibition. In Madame Realism, several themes will be addressed: the female dandy, visible and invisible gender roles, the political implications of design and reflections on the interior as a form of social critique.

With the exhibition À l'intérieur in 2006, Marres introduced the position of the Dandy in relation to the 19th-century desire for beauty as a new metaphysics. Stylemeister San Ming transformed the rooms of Marres into a private domain in which every form of hierarchy, for example between art and design, was dissolved in favour of an individual universe. First and foremost, Madame Realism aspires to provide the commonly male position of the dandy - this idiosyncratic 'home curator' - with a counterpart, by way of focusing on the work of female artists inspired by the interior. However, in Madame Realism, the interior is approached as a reflection of the outside world.

A female Des Esseintes, the archetypical dandy in the book À Rebours by J.K. Huijsmans, does not exist. In the context of the 19th-century cultural milieu, the woman primarily plays a role as the hostess of salons, a connecting position that has nonetheless proven to be particularly important. According to Walter Benjamin, modern life at the onset of the 20th century witnessed the emergence of a separation between the living and working environment, which oppose each other for the first time: “the former is constituted by the interior; the office is its complement”. Since then, the interior is approached as the domain of the woman, while the exterior, as defined by architecture, is seen as the domain of the man. Although her 'influence on the interior design marks the influence of women throughout social life'[1], this 'exile' to the interior is related to the social exclusion of female artists and designers in the public debate. At the same time, female avant-gardists such as the feminist writer Virginia Woolf and the designer Eileen Gray, criticise and break through this patriarchal system.

The works exhibited in Madame Realism do not aspire to improve the house or its domesticity, but instead want to radically change the idea of home. The works in the exhibition are inspired by (designs for) the interior, made for the interior, can be associated with the 'inner life' or are otherwise challenging to be seen in the context of the interior. In Madame Realism, the interior is approached – physically, artistically, literary or mentally – as a domain of emancipation and dissidence.

A new essay by Avigail Moss will be presented in conjunction with the exhibition.

The exhibition title, Madame Realism, takes its name from a character recurring in the work of American novelist and cultural critic Lynne Tillman (1947). “Madame Realism ignites conflict and crisis not with the usual powder of incident and dialogue, but with the twists and sharp U-turns of internal thought.”

the Avantgarde:
Made In Europe Filmfestival - Sven Augustijnen

Marres, Centre for Contemporary Culture, takes part in the Made In Europe Filmfestival with a specific project. Referring to the central theme of the Filmfestival - Belgium - Marres presents a selection of films from the oeuvre of the Belgian artist Sven Augustijnen (1970).

The films by Sven Augustijnen take us deep inside modern Belgium and its history. Here, reality is unravelled as a complex and troubled subject. Augustijnens films explore the boundaries between report, research documentary and 'docudrama', on a fine line between revealing and concealing.