'Emil Nolde - Watercolours' features 24 seldom-seen watercolours in the possession of the Staatliche Graphische Sammlung, that have not been on show for a long time. 'Vermeer in Munich' presents the exceptional private collection amassed by the first king of Bavaria, Max I Joseph, including the Vermeer's 'Woman Holding a Balance', 'Treasures from the Depot' celebrates the anniversary year with a number of paintings from the rich holdings in the Alte Pinakothek collection. 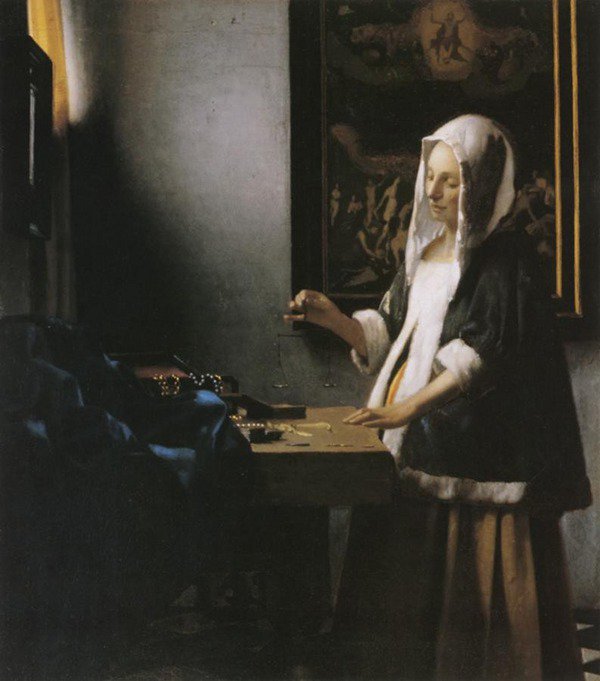 In this exhibition on Emil Nolde (1867-1956) at the Pinakothek der Moderne, the public will once again be able to view the 24 seldom-seen watercolours in the possession of the Staatliche Graphische Sammlung, that have not been on show for a long time. These celebrated and equally well-loved sheets by the famous German Expressionist, which cover all the subjects otherwise found in his œuvre, can only be exhibited very rarely due to their extreme light sensitivity.

Nolde turned to watercolour early in his career. He developed his characteristic style of applying paint in the wet-on-wet technique between 1900 and 1910. From 1911, he used highly absorbent Japanese paper which made the colours run into each other all the more. The range the subjects found in his other work is also mirrored in his watercolour paintings. These are not sketches for works in oil, but form a part of his œuvre in their own right. The watercolours also retain a focus on the object, be they radiantly luminous or in subdued shades. Form is not sufficient in itself, all the more so since the colour compositions take on their own independent existence. Nolde’s style of watercolour painting remained virtually unchanged for decades which means that it is very difficult to assign the mostly undated sheets to individual phases of the artist’s work.

The exhibition also draws attention to a fascinating piece of collecting history. The Staatliche Graphische Sammlung München acquired its first watercolour by Emil Nolde back in 1927 from the Graphisches Kabinett, Munich (later the Galerie Günter Franke). Two further acquisitions were made in 1929 and ’30 directly from the artist in Berlin. The watercolours as well as 16 of the 22 prints by the artist in the collection escaped the National Socialists’ »Degenerate Art« campaign. Two watercolours are from the collection owned by a member of the Higher Regional Court, Karl Osthelder (c. 1860–1945), about whom little is known. In the 1920s, however, he was already actively involved as a patron of contemporary art being a »Friend of the Staatliche Graphische Sammlung«, and later left his extensive art collection to the state of Bavaria.
Sophie and Emanuel Fohn acquired works that had been confiscated during the »Degenerate Art« campaign in 1937 and which had formerly been in public collections throughout Germany, largely in exchange for their own collection of drawings from the early 19th century. In 1964, the husband-and-wife team presented their collection to the Bayerische Staatsgemäldesammlungen. This included an important watercolour by Nolde that has never been clearly attributed to any collection, but most probably came from the Folkwang Museum in Essen, or the Städtische Galerie in Wuppertal-Elberfeld. Both before and after 1945 the Bayerische Staatsgemäldesammlungen had been collecting paintings on paper which were then handed to the Staatliche Graphische Sammlung in 1967. Seven watercolours by Nolde entered the collection this way.
A further ten watercolours came to Munich through the Kruss Collection. Martha (d. 1977) and Markus (1872–1962) Kruss bequeathed their collection of Expressionist art, that Markus Kruss had started to amass in the wake of World War I, to the state of Bavaria. Kruss and his first wife, who died in 1942, were friends of Nolde’s, and with ten watercolours and six prints, he was the artist with the most works on paper in the Kruss Collection.

The Alte Pinakothek is welcoming a very special guest to its 175th anniversary: Johannes Vermeer’s “Woman Holding a Balance” from the National Gallery of Art in Washington. In the early 19th century, this exquisite masterpiece once formed part of the exceptional private collection amassed by the first king of Bavaria, Max I Joseph (1756-1825). He focused almost exclusively on 17th-century Dutch masters, mostly landscapes and genre paintings. To these he added the works of contemporary painters in Munich who were inspired by such Old Masters. In 1826, one year after the death of Max Joseph, the private royal collection was sold at auction. Some exceptional works were acquired for the state collections; others found their way to the Alte Pinakothek via roundabout routes – as part of Ludwig I’s collection, for example; many are now scattered far afield. From today’s point of view, the greatest loss was Vermeer’s painting of 1664.

The special appeal of Vermeer’s paintings is not to be found in the seemingly everyday scenes frequently depicted, but much more in the atmosphere that these pictures exude. Seldom, however, is the tranquility so often conjured up in the works of the Master of Delft so manifestly transposed through the motif as in this work, which focuses on the moment when the pretty young woman pauses, concentrating fully on adjusting the balance. What is actually happening is less to be found in a visible deed but rather in the figure itself. The depiction becomes an allegory to meditation and reflection on a just and temperate life – literally against the background of the admonition in the “Last Judgment” that is shown as a painting within a painting. The carefully thought-out iconocraphic programme, the gentle brushwork, the effective use of light and not least of all the masterly blend of colour values make “Woman Holding a Balance” a major work within Vermeer’s œuvre and, beyond this, one of the most important 17th-century genre paintings in existence.

Surrounded by a good twenty other exceptional paintings from the “Golden Age” of Dutch painting, including works by Jacob van Ruisdael, Paulus Potter, Willem van de Velde the Younger and Philips Wouwerman, the Vermeer painting will give visitors the opportunity to discover Max I Joseph of Bavaria as a collector of Old Masters for a period of several weeks from March onwards.

To mark the anniversary year, a number of paintings from the rich holdings in the Alte Pinakothek collection, that have seldom been displayed, are on show. Several have not been seen for more than half a century, others have been exhibited over the past few years, albeit mostly for just a brief period. Unknown masterpieces as well as unusual paintings await discovery from 17 March onwards in the North Cabinet Rooms in the "Klenze Portal" exhibition area in the Alte Pinakothek.

The exhibition opens with Early Netherlandish paintings, three of which deserve a special mention. These are copies of works by Jan van Eyck and include two large-format paintings after panels from the Ghent Altarpiece, commissioned by King Philip II of Spain for the chapel of the royal palace in Madrid and created by Michiel Coxcie between 1557 and 1559, and the "Head of Christ," a copy from around 1500 of van Eyck's original work of 1438. These are complemented by works of the Antwerp Mannerists, copies of paintings by Gerard David of Bruges, as well as a touching husband and wife portrait by Jan Joest van Kalkar.

The adjacent room is devoted to early Italian painting from Florence and central Italy. Works from the beginning of the 14th to the mid-15th century, including paintings by Segna di Bonaventura, Niccolò di Pietro Gerini, Agnolo Gaddi and Fra Angelico, document the high quality and radiant beauty of Florentine art. Fragments from complex altarpieces, devotional pictures and a portrait highlight painting's main purpose at that time.

These lead to the large-format history paintings from the Antwerp school from the 1530s to the 1580s. The so-called "Romanists" fuse elements of the Netherlandish pictorial tradition with Italian painting in their works. Whereas Willem Key's "Lamentation" is still clearly modelled on older works, Jan Sanders van Hemessen's powerful, muscular figures reveal a closer examination of Michelangelo's work, whose acquaintance he may well have made during a trip to Italy. Maerten de Vos' "Mannalese" with its multitude of elegant, elongated figures represents the "horror vacui" so typical of Mannerist painting.

These are followed by Dutch architectural studies which were referred to as "perspectives" in the 17th century. From the late 16th century onward, specialised painters of this genre focussed on depicting interior and exterior views of initially imaginary and later real buildings. Following on from his father, Hans Vredeman de Vries - who was active from the beginning of this development - is his son, Paul, who worked in Amsterdam and was one of the artists who established architectural painting in Holland between 1610 and 1620. This reached its peak at around the middle of the century, as demonstrated by the high-quality paintings of Bartholomäus van Bassen, Anthonie de Lorme and Daniel de Blieck.

The exhibition is rounded off with works by French artists: from history painting to portraits, from the 17th centuy to the Rococo. These document the utterly different manners of expression adopted by painters from Rome, Paris and the Lorraine district of France: Claude Deruet's "Rape of the Sabines" is still bound to the formal language of the Mannerists, for example, whereas Charles Antoine Coypel's "Hercules and Omphale" stands out due to its lively use of colour in the Rubens tradition. The several studies in oil by Pierre Subleyras are a fascinating testimony to the creative artistic process.