Fin de Partie. The first solo show in China by South African artist is composed of a whole group of new works: it's not only a tribute to Samuel Beckett's play of the same title, but also refers to the endgame in chess, when very few pieces are left and each move might result in one player putting the other in a position of checkmate, thereby bringing the game to an end. The starting point for the exhibition is the idea of a post ideological, post utopian, melancholic state of being. 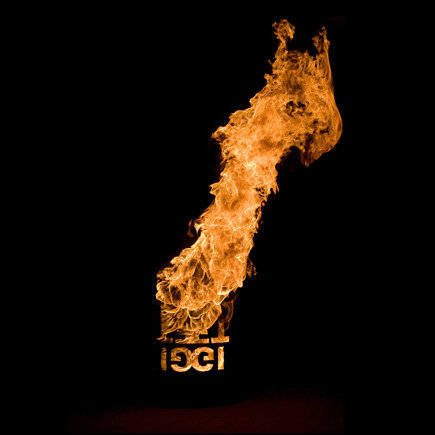 Galleria Continua has the great honour to present Fin de Partie, the first solo show in China by South African artist Kendell Geers. An exhibition composed of a whole group of new works.
Fin de Partie is not only a tribute to Samuel Beckett’s play of the same title, but also refers to the endgame in chess, when very few pieces are left and each move might result in one player putting the other in a position of checkmate, thereby bringing the game to an end.

The starting point for the exhibition is the idea of a post ideological, post utopian, melancholic state of being. What is left of the grand political ambitions of the previous century? What is the role of art in this post-post-post capitalist society?

The word dystopia (or antiutopia, cacotopia) is used to define a narrative genre depicting a fictitious society that is undesirable from all points of view. Dystopic texts are satirical narrations showing apocalyptic conclusions in the future of tendencies in the present. By making readers face the extreme consequences of a certain social attitude, they work as a sort of warning to society.
The fundamental concept of dystopia and the notion of reverse engineering are the main concerns which guided the artist’s creative process during his engagement with China, and are reflected in this corpus of new art works in terms of both politics and production. Apocalyptic images such as broken glass, tall towers of burned drums based on Tibetan prayer wheels, and flames and fires, are the leitmotifs of this exhibition. Geers has visually, and in some cases literally, written his own dystopic pamphlet.
At the most essential and direct level, the artist has made three artist’s books based on Mao’s Red Book, the Communist Manifesto and the comic Tintin in Tibet. Deleting everything from the books except the dots, Geers has obtained blank pages, whose dots appear as constellations of stars, thus becoming a metaphorical visual left-over of utopian ideology.

Other works in the show have been similarly conceived. According to the artist, “the image of utopian ideology was never better designed than with the Russian constructivists. In the same spirit, the Bauhaus designers in Europe tried to find a way of embedding their visions in furniture.” That is why he asked Chinese carpenters to copy, from pictures, some of the design classics of the 20th century, using wood that had first been painted with his own design, the result being “an awkward misinterpretation of history covered in dystopian design”.
The main installation in the exhibition focuses on a much more intimist creative practice. The one- to three-meter- high sculptures that punctuate the major gallery space like Easter Island statues are African figures reverse engineered from plaster casts. As a result, they are Chinese interpretations of the artist’s interpretation of African gods.

Dystopias often explore what has now become the most present and tangible reality: dehumanization, insensitiveness, abuse, depredation of “any culture, faith, tradition, in the subjugation of every form of life in the pursuit of profit by any means necessary”.
If the purpose of utopia is “to cause us to advance”, is dystopia what forces human beings to stand still in a stalemate condition? Is it really the end of the game?

Kendell Geers was born in Johannesburg (South Africa) into a family belonging to the Afrikaner community, with a Calvinist religious background descending from the Dutch colonists that settled in South Africa between the 17th and the 18th century.
His childhood was marked profoundly by the segregation and injustice of apartheid (literally “separation” in the Afrikaans language), which divided not only the white and the black communities, but also whites of British and of Dutch origin, triggering a spiral of violence destined to continue until the middle of the 90s.
In 1989, together with another 168 people, he refused to serve in the South African Defence Force, a crime punishable with up to six years in prison; before his arrest he managed to escape to the United States, where he stayed, working as an assistant to the artist Richard Prince, until 1990, when Mandela was released and he was able to return to Johannesburg. In 1993, he decided to place his date of birth in May 1968, a historical moment that was packed with events for his artistic and personal growth: the students’ revolts, the death of Marcel Duchamp, the murder of Martin Luther King.
This identification between collective history and personal life would become one of the pivots of his future artistic output, and is perfectly exemplified in his on-going work, T.W. (cv), a curriculum vitae that includes the major dates and corresponding events which have influenced Kendell Geers as a person and as an artist.

He currently lives and works in Brussels (Belgium). In his career he has developed polymorphic work making use of expressive means of different nature: ready-mades, installations, video, photography, performance, etc. He questions codes of behaviour, moral principles, and ideological, political and social systems (including the art world itself) through shocking and profound art works.
His work has been shown in numerous international group exhibitions, including the African Pavilion at the 52nd Venice Biennale (2007) and Documenta 11 in Kassel (2002). Recently, his solo show Irrespektiv travelled to a number of prominent European museums: the SMAK (Ghent, Belgium) and the Baltic (Gateshead, UK) in 2007; the DA2 (Salamanca, Spain) and the MAC (Lyon, France) in 2008; and the MART (Rovereto, Italy) in 2009.

On this occasion Kendell Geers will held a conversation with Jérôme Sans
Saturday March 19th, from 3pm at Galleria Continua / Beijing
To attend the conversation, a reservation is required, email: liuhui@galleriacontinua.com.cn