The subject of the exhibition is the work of three female artists, pioneers of Polish women's art: Ewa Partum, Natalia Lach-Lachowicz and Maria Pininska-Beres, who died in 1999. All three are linked by the ephemeral character of their actions, which today are often only preserved in the form of photographs or film documentation. The exhibition can also be seen as a space of negotiation between the curator and feminist researcher of art in Poland, Ewa Toniak, and the author of the spatial conception, the outstanding Polish stage designer Malgorzata Szczesniak. 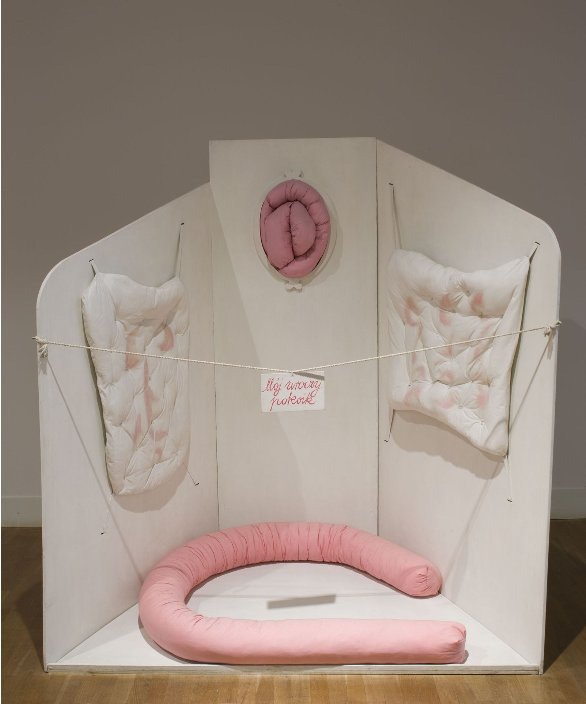 The subject of the exhibition is the work of three female artists, pioneers of Polish women’s art: Ewa Partum, Natalia Lach-Lachowicz and Maria Pinińska-Bereś, who died in 1999. The scope of their activity covers the period from the second half of the twentieth century to the beginning of the 2000s. From the 1970s onwards, they have been linked by a similar quest in which a clear feminist intuition or an identification with feminism is perceptible. Despite this, however, this will be the first time when their works are set alongside one another in such a configuration.

Amongst the three artists, it was Ewa Partum who most decisively identified herself with a feminist stance in art. As early as the 1970s she actively, in manifestoes read during exhibition openings, expressed her opinion on the question of the equality of women and their discrimination. In the case of the work of Natalia LL, who to this day distances herself from the critical postulates of the women’s movement, but having been noted by feminist criticism from the second half of the 70s has taken part in exhibitions and manifestations of feminist art, such as in 1975 in the Ursula Krinzinger Gallery in Innsbruck Frauen Kunst – Neue Tendenzen (Women’s Art – New Tendencies) alongside the works of such artists as: Marina Abramović, VALIE EXPORT, Rebecca Horn, Joan Jonas, Maria Lassnig, Annette Messager, Gina Pane and Carolee Schneemann, one can perhaps talk in terms of her being “co-opted” by Western feminist discourse. The soft, pink forms of Maria Pinińska-Bereś, on the other hand, openly linked with female sexuality, are seen by some Polish critics even as a precursor in relation to feminist art in the West.

The artists mentioned belong to the major current of contemporary Polish art, they have well-known biographies and their oeuvres do not need to be reconstructed or supplemented, and yet it seems that beyond a small number of specialists their work is not well-known. All three are linked by the ephemeral character of their actions, which today are often only preserved in the form of photographs or film documentation.

The exhibition is a part of the process of giving to women’s art in Poland its rightful historical place, a process underway since the mid 90s. It does not aim at a “theoretical revision”. It treats the work of the artists mentioned as “performative acts, through which subjects negotiate their material and discursive positions in the context of many historical moments” (Marscha Meskimmon). It also aims to break with linear narration; it will be open to “contradictions, to a multiplicity of conflicts”.

The exhibition can also be seen as a space of negotiation between the curator and feminist researcher of art in Poland, Ewa Toniak, and the author of the spatial conception of the exhibition, the outstanding Polish stage designer Małgorzata Szczęśniak, with the discursive practices of the three women artists.

The title Three Women…, inspired by the 1977 Robert Altman film, makes reference to the exhibition Three Women in the Arsenal Gallery in Poznań in 1978 (Anna Bednarczuk, the assistant of Magdalena Abakanowicz, Izabella Gustowska and Krystyna Piotrowska) – the first collective manifesto of women’s art in Poland. The exhibition will confront works from the latest period of the artists works, those that emerged during the 90s and after 2000, that consciously relate to feminist contexts, or are neutral or even openly ironic in relation to them – with works from the 70s recognized by today’s feminist criticism as precursors. The exhibition will also present documentation and archive materials from the 70s and 80s.

The exhibition will be accompanied by a catalogue-reader (designed by Błażej Pindor) with a rich iconography and texts by the curator of the exhibition, Dr. Ewa Toniak, and researchers of the art of the three artists, Dr. Hab. Agata Jakubowska and Ewa Tatar, and the philosopher and film theoretician Paweł Mościcki.

A supplement to the exhibition will be a rich educational programme (lectures, panel discussions, films) dedicated to the history of the beginnings of Polish women’s art, its reception in the People’s Republic of Poland, and its relations with the feminist movement in the West.