The exhibition Performing the Document presents artistic works that push the limits of documentary practice. By experimenting with narrative structures, (art) historical references and by the use of new media fomats, the works on display extend the traditional boundaries of the documentary. Curated by Anna Schneider. 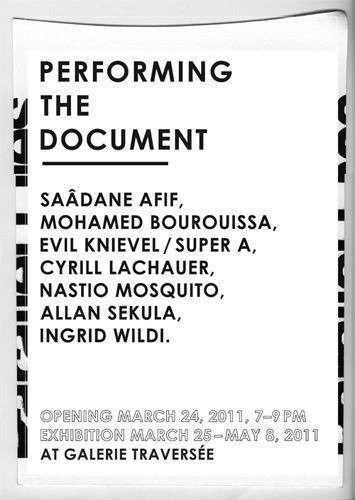 The exhibition Performing the Document presents artistic works that push the limits of documentary practice. By experimenting with narrative structures, (art) historical references and – last but not least – by the use of new media fomats, the works on display extend the traditional boundaries of the documentary.

Amongst other characteristics, the documentary form is initially anchored primarily in photography and video. It is here that its claim to immediacy and authenticity tends to be most consistently realized. In the exhibition this premise is extended by the dimension of the performative, the theatrical and the poetic. And, in fact, without negating the claim that the document should function as evidence of reality, but rather to give artistic testimony to its meaning as a document, as an interpretation of reality. This can obviously only be done from a subjective perspective; moreover, with a consciousness of the construction of the image-reality itself. Given that from the very beginning the documentary genre was part of a socially critical and politically ambitious production of images, it is not at all contrary to its core that it now also incorporates the developing awareness of ones own involvement and inevitable act of interpretation: the artist is now an actor, a manipulator, a trickster, a performer.

This becomes evident in the work of Allan Sekula, who in many ways plays a key role in this presentation. His critical approach – both with a “photographic functionalism” of the social-critical reportage of the 1930s and a “neo-romantic aestheticism” (Sabine Breitwieser) – made him an influential figure in the reinvention of documentary photography. In his body of work he moreover unites elements of the performative and of documentary photography. Sekula’s interest in the theatrical is particularly evident in his early work of the late 1960s, which for many artists of the next generation is the central point of departure.
In the space demarcated by these two conflicting polarities the exhibition examines disciplinary boundaries and their possible extensions. The work hereby enables access to a dimension that is temporally or spatially inaccessible.
Two performances (March 24 and April 14) accompany the show.
Curated by Anna Schneider

Anna Schneider currently works as Assistant Curator at Museum Villa Stuck in Munich. 2009 she received her MA in the program Exhibition & Museum Studies at the San Francisco Art Institute.