The Fractured Word. This new exhibition presents in painting and sculpture a distinctive meditation on violence and constraint, as they can be enacted on the mind as well as felt on the body. 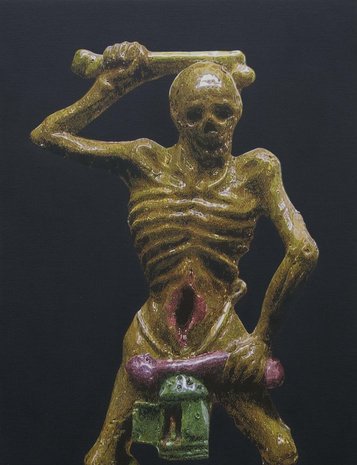 Mathew Weir's new exhibition presents in painting and sculpture a distinctive meditation on violence and constraint, as they can be enacted on the mind as well as felt on the body. Taking inspiration from a range of literary, historical and psychoanalytic (especially Freudian) accounts of domination and suffering (and the release from such bonds, in emancipation or death), Weir's practice explores these themes in objects and images, constructing an uncanny and visceral visual experience which begins where language has either stopped, or failed.

The iconography of Mathew Weir's paintings draws on a very specific tradition of eighteenth and nineteenth century decorative art, the ceramic figurine. These figurines offer highly ornate and stylised representations of a diverse number of historical, fictional and fantastical figures, from political notables like the American Abolitionist John Brown (1800 -1859), to characters from Harriet Beecher Stowe's seminal anti-slavery novel Uncle "Tom's Cabin" (1852), to more archetypal and universal figures, such as the danse macabre's image of Death. In Weir's paintings, these objects are animated within rich, often powerfully delicate and textured backdrops to realise their symbolic potential. Although Weir's paintings, chromatically lush and compositionally nuanced, seem at first glance to formally diverge from his spare, often severe sculptures, such a contrast belies their inherent thematic congruity. The sinister elegance of Weir's paintings is mirrored by the poetic brutality of his sculptures, disturbing objects which, through precisely calibrated scale and an unnerving sense of materiality, articulate in different ways the narratives of repression and oppression, desire and violence that concern Weir in this body of work.

The experience and meaning of violent physical discipline is an important idea for Weir, which is explored in the dialogue between a number of works in the exhibition. "Man of Sorrows" presents a detail of a figurine of Uncle Tom, the central character of Stowe's Abolitionist clarion call who became the apotheosis of the suffering Black slave in the Old South, but one who was also sometimes presented as being complicit in his punishment through passive non-aggression towards his 'master'. This figure, and indeed the novel as a whole, were adjudged by Freud in "A Child is Being Beaten" (1919) to indulge the quasi-masochistic beating fantasies of children, a psychosexual predicament suggested by Trace. An exaggerated replica of a Victorian child's chair with a cast iron belt draped tenderly over the chair, the sculpture intimates an almost menacing gentleness, where the threat and potential for violence are implicated with feelings of security.

A sense of the intimacy of pain inflicted is also extended by Weir into a realm of dark erotics through a number of works in the exhibition. The close and contorted relationship between sex and death, where life begins and ends, is graphically alluded to in "You Are Going to Die Soon", the image of Death whose mortal wound is unmistakably suggestive of a vaginal opening. Less figuratively and more troublingly, "Isn't there anyone to come and strangle me quietly in my sleep", taken from the last line of a short story by Ryunsoke Akutagawa (1892 - 1924), takes the bed, ordinarily conceived as a site of sexual activity and comfort, and re-renders it as a place of pain. The hard plaster pillow, set on a plinth the same height as the artist's bed, is vehemently pierced with a stake, a gesture evocative of the blend of cruelty and tenderness which runs through much of Weir's practice.

Weir's concern to probe the psychological implications of elemental binary oppositions, between life and death, illness and well-being, love and violence, is also evidenced in the themes of binding and freedom that are explored in his practice. "Hangman" features the pioneering campaigner John Brown whose crusade for slave emancipation ended, with horrible irony, in his being bound with a rope and hanged. Motifs of constriction and bondage, in physical, sexual and mental senses, are particularly prominent in a number of Weir's sculptural works, objects of constraint whose heightened physicality underscores a sense of oppression. The body's absence in "Escape" and "On the Threshold of Eternity", and its muffled proxy in "Restraint", quietly disclose a sense of entrapment, as Weir quietly conveys the threats posed by some of human beings' most unspeakable anxieties.

Mathew Weir (b. Ipswich, 1977) studied at the Winchester School of Art and the Royal College of Art. Recent international exhibition include "Wonderland - Through the Looking Glass", curated by Robbert Roos, KadE, Amersfoort (2009); "Wunderkammer/ Passion Fruits", me Collectorʼs Room, Berlin (2010); and "Liebenslust & Totentanz", Kunsthalle Krems, Krems (2010). In October 2011 his work will feature as part of a presentation of The Thomas Olbricht Collection at La Maison Rouge, Foundation Antoine de Galbert, Paris. He lives and works in London.