'Joy and Disaster' presents a dialogue between the work of 8 Hungarian artists and a selection of works from S.M.A.K. collection. 'Raum und Zeit' is an overview of the work of the German sculptor Michael Sailstorfer. Spanish artist Carlos Rodriguez-Mendez is installing a gigantic minimal sculpture in the Kunst Nu room. It comprises 39 huge white PVC tubes. Several years ago S.M.A.K. conceived a plan to provide a permanent place in the museum to display the works of art and documents of Marcel Broodthaers from its collection. The exhibition Marcel/Het Broodthaerskabinet hosts several major works and documents by the artist held in a permanent place in the museum. 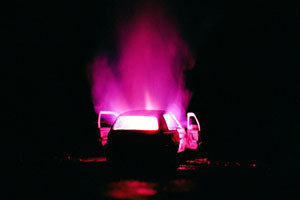 On the occasion of Hungary’s presidency of the European Union in 2011, S.M.A.K. is presenting a dialogue between the work of eight contemporary Hungarian artists and a selection of works from its own collection.

Zsolt Petrányi (former director of Műcsarnok, Kunsthalle Budapest) selected the artists and the work at the invitation of S.M.A.K. The basis for Joy and Disaster is an evaluation of the themes which provided the foundations for the Prospect 80/1 exhibition thirty years ago. For that exhibition the artistic director Jan Hoet chose six artists from the then communist Hungary. Given the circumstances at the time, the exhibition inevitably raised questions about the artist’s position in society. The artists selected then, Miklós Erdély, Tibor Hajas, András Halász, Zsigmond Károlyi, Endre Tót and János Vetö, were all members of the avant-garde movement and opposed the social system imposed from outside and the restrictions this put on artists. What united them was their abhorrence of this society and the isolation in which they were forced to work.

The commitment of the artists at that time is now echoed in the work of Tamás Kaszás, Zsolt Tibor, Emese Benczúr, Little Warsaw (András Gálik and Bálint Havas), Ádám Kokesh, Dezso Szabó, Adrián Kupcsik and SZAF (Miklós Mécs and Judit Fisher). These artists are still concerned with political, historical and social topics and the relationships between art, society and the community. Joy and Disaster is an attempt to interpret the position of the contemporary Hungarian artist in society and examines how his status has evolved since 1980.

The exhibition will be accompanied by a publication in Hungarian and English, including a facsimile of the catalogue from 1980.

A curious spectator of everyday life

Raum und Zeit is an overview of the work of the German sculptor Michael Sailstorfer (b. 1979, Velden/Vils). Although this young artist enjoys great international acclaim, his work has rarely been shown in Belgium. S.M.A.K. intends to change this. On the basis of about twenty works, the exhibition sketches a nuanced picture of Sailstorfer’s still young oeuvre.

Sailstorfer is a melancholy dreamer who looks at the world with an inquisitive eye. By means of such traditional sculptural processes as transformation and decontextualisation, such familiar objects as car tyres, lamps and trees are turned into images whose value is purely aesthetic. Sailstorfer has an eye for the formal qualities of these objects, but he leaves room for fiction, imagination and the romantic too.

The title of the exhibition refers to the two elements that shape our reality: time and space. As a sculptor, Sailstorfer tries to influence these elements. To achieve this he makes active use of the senses: light, smell and sound are transformed into workable, plastic materials. Specially for this exhibition, for example, he has created Reaktor – Gent (2011), in which he examines how a monotonous sound fills space. Or else he looks at how the smell of popcorn can gradually pervade the museum. In this way he works out how sculptures occupy space, how they expand and transcend their own physical size.

This is also the case with Zeit ist keine Autobahn (2005-2010), of which several versions have been assembled in a single room for the first time. Five car tyres revolve slowly against the wall and are thereby gradually worn down. The tyres make a quiet rubbing sound and fill the room with the smell of burnt rubber. This series can be seen as a metaphor for the ever-increasing need for our society to speed up – an acceleration that can only lead to self-destruction.

Sailstorfer questions our need for continuous acceleration, our search for a private space and our modern idea of mobility, in playful images which idiosyncratically demand that time be stopped. Sailstorfer’s work presents us with a surprising and poetic view of the reality that surrounds us. Like a child who explores the world and tries to control it, Sailstorfer transforms everyday objects into aesthetic images that question man’s position in time and space.

In the work Schwarzwald (2010-2011), for example, he shows us a natural scene deep in the forests at Düren in Germany. Here a 6-metre cube within which every twig, leaf and piece of moss has been painted black. A picture of the intervention is broadcast in the exhibition by live streaming. What interests the artist here is the transformation of the actual painted forest into its representation in a museum. As visitors to the exhibition we are no longer looking at reality, but at an abstraction of it. The limited perspective generates room for the imagination.

Raum und Zeit shows a selection of works from the last ten years and includes installations, photos, videos and sculpture. From his earliest work, Waldzput (2000) through the 16mm film Lohma (2008) and the recent No Light and Wolken (both 2010), it becomes clear that nothing in this artist’s work maintains its familiar position.

For his exhibition 'Agua Caliente/Hot Water', the Spanish artist Carlos Rodríguez-Méndez (Pontevedra, 1968) is installing a gigantic minimal sculpture in the Kunst Nu room at S.M.A.K. It comprises thirty-nine huge white PVC tubes, each thirty-five metres long, which are literally stuffed into the room. Each tube is filled with five litres of vegetable oil, and in the course of the exhibition this will gradually begin to leak out.

By using such simple everyday materials as soil and peat or, as in this case, plastic, and by employing a minimalist visual idiom, the work of this artist can be situated somewhere between Arte Povera (’70) and Minimalism (’60). But there is more to it than that. The ‘scars’ the tubes left in the room as they were being installed will remain visible and tangible to the viewer. In this way the work negates the typical discourse of Minimalism, because rather than aiming for balanced proportions, it becomes a sculptural examination of the (overblown) relations of scale between body, sculpture and room. The leaking oil is also characteristic of Rodríguez-Méndez’ highly physical approach to sculpture and can be interpreted as a bodily fluid slowly seeping out of the ‘body’ that this sculpture forms. This means that the sculpture, however ‘Minimalist’ it looks, is more like a living body that has wounded itself by its aggressive desire to penetrate the surrounding space at whatever cost.

The many performances Rodríguez-Méndez carries out – or has carried out for him – and which act as some sort of ‘performative sketches’ for his sculptures, also illustrate this highly physical, almost sexual view of minimal sculpture, even though in those works he seems to want to go down the opposite road. A typical example is the action entitled Batir Saliva/Beating Saliva, which is performed at an unannounced time in the course of the exhibition. A performer, sitting in the entrance of ‘a’ public building in Ghent, whips up Rodríguez-Méndez’ saliva into a foam. Instead of a sculpture that takes possession of the architectural space and thereby secretes fluids and leaves scars, as is the case in the Kunst Nu room, in this action fluids from Rodríguez-Méndez’ own ‘sculptural’ body are themselves secreted and are once again ‘moulded’ into sculpture by means of a physical act taking place in an architectural setting.

And there are other possibilities too. In the performance called Agua Caliente/Hot Water, which is also the title of the exhibition, a performer drinks glasses of boiling hot water. In this case it is the external fluids which in their turn penetrate the ‘architecture’ of the sculptural body and there cause harm or leave scars. In this way the artist intelligently mixes up the ‘traditional’ minimalist triumvirate of body, sculpture and architecture to end up with a highly corporeal, almost ritualistic-eschatological approach to ‘sculpture as a body’. In so doing he uses both aggressive activist aspects that refer to the performance art of the ’70s, headed by Chris Burden and the Wiener Aktionisten, and more traditional minimal means of presentation such as white PVC, playing with the white cube and the glorification of the object as a work of sculptural art. Rodríguez-Méndez’ work is only complete when it is present and observable in its physical performance (the sketch), the process of its physical creation (the installation) and its sculptural presentation (the work as the body itself). And all within the various corporeal possibilities that architecture itself possesses. The body as architecture and/or architecture as a body.

Several years ago S.M.A.K. conceived a plan to provide a permanent place in the museum to display the works of art and documents of Marcel Broodthaers (Brussels, 1924 - Cologne, 1976) from its collection.
Since 1973, when the Friends of S.M.A.K. were able to buy Miroir d’Époque Regency (1973), S.M.A.K. has continued to have a particular interest in Broodthaers’ work. Several other major works and documents have also been acquired since then. Shortly after its opening in 1999, for example, the museum procured Grande Casserole de Moules (1966) and also a collection of objects, editions, books, films, catalogues, posters and invitations. In 2006 the Flemish Community purchased the crucial work Le Pense-Bête (1964) and gave it on permanent loan to S.M.A.K.

The increasing significance of Broodthaers’ work as part of the collection gradually led to the idea of giving this oeuvre a permanent place in the museum. A place where the Broodthaers collection would not only be displayed, but also documented and set in a specific framework. Not as a monument or mausoleum in which the work is enclosed, but more like an intimate setting where encounters can take place and where Broodthaers’ work can be studied. To achieve this, in 2006 the museum held a competition in which three architects were asked to come up with a design for the project. The proposal ultimately selected was by architecten de vylder vinck taillieu. Their design devotes plenty of attention to Broodthaers’ work, but it combines it with the ease and practicality of a study centre. In terms of its form, the design clearly refers to the display cabinet, which Broodthaers used a great deal.

This gallery is located on the boundary between the museum and the Floralia Hall behind it. This is also where the exhibition entitled MARCEL/Het Broodthaerskabinet will be held. This puts the gallery on the fringes of the museum, which makes it supremely suited to reflecting on and questioning the workings of the museum, just as Broodthaers did. For this exhibition, a full-size replica of one of the rooms of the gallery will be built in the position planned for it. The lines marked on the large wall in the glass extension indicate where the openings into the hall behind will be. You can see more of the architecture in a series of drawings and a model that are also included in the exhibition. The work Miroir d’Époque Regency reflects the area that in time will become the gallery.

In conjunction with the exhibition, S.M.A.K. has published a catalogue entitled Marcel: Het Broodthaerskabinet: L’Inventaire in association with CAHF (Contemporary Art Heritage Flanders).