Best known for site-specific works that involve explosions and/or the propulsion of objects through open space, here he presents an installation that contains aspects of both his ephemeral outdoor works and his kinetic indoor sculpture exhibitions. It features an hour-long loop of selections from Restenfilms or 'film leftovers', a video documentation of experiments never constituted as artworks. Contemporary Robert Hengeveld's ambitious installation project Natural Revision. 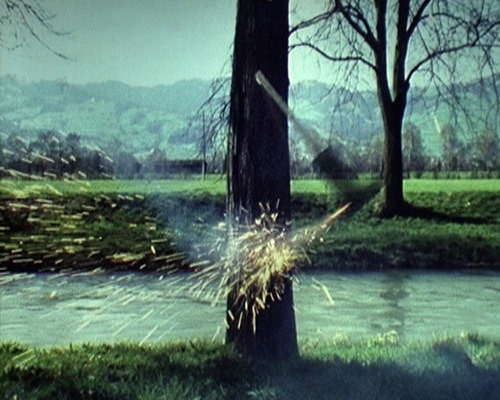 "Always in my work something is going to happen, is happening or has happened. Or could happen."
–Roman Signer

Roman Signer has devoted several decades to the development, execution and documentation of experiments involving everyday objects in extraordinary circumstances. Best known for site-specific works that involve explosions and/or the propulsion of objects through open space, he also creates works scaled to confined spaces in galleries and museums.

Cinema is an installation that contains aspects of both Signer's ephemeral outdoor works and his kinetic indoor sculpture exhibitions. It features an hour-long loop of selections from Restenfilms or 'film leftovers', a video transfer of the artist's Super 8 documentation of experiments never constituted as artworks, as well as shots of locations that were possible staging grounds for potential works. The set-ups presented involve relatively obvious examples of cause and effect with aesthetically powerful and humorous results. These stand as an impressive record of Signer's wit and invention. This work will be projected in a darkened room furnished with several rows of wooden chairs; one of which will rock on its back legs, a mechanical intervention that creates an absurd and uncanny distraction.

Roman Signer was born in Appenzell, Switzerland in 1938. He studied at the Schule für Gestaltung in Zurich and Lucerne from 1966-1971, and the Academy of Fine Arts in Warsaw, Poland from 1971-1972. His works have been shown in museums and galleries worldwide, as well as the Venice Biennale (1976 and 1999), Documenta 8 (1987) and Skulptur Projekte Münster (1997). He is the subject of numerous books, monographs and catalogues, the recipient of many awards, and in 2008 was a finalist for the prestigious Hugo Boss prize. In 1996 he collaborated with director Peter Liechti on the film Signers Koffer (Signer's Suitcase), which documents a series of his action sculptures and interviews with people he encounters during his travels performing the work.

Robert Hengeveld’s ambitious installation project Natural Revision combines manufactured landscaping products—synthetic rocks, trees and grass—with wildlife decoys and proto-natural sounds to create a visual and acoustic environment suggestive of Algonquin Park but more plastic in form. The resulting installation sets a playing field in which our relationship to the natural landscape can be explored against our growing comfort with the synthetic.

Roman Signer’s Cinema is co-presented with the Images Festival of Independent Film and Video (March 31–April 9, 2011).

Established in 1987, Toronto's Images Festival is the largest festival in North America for experimental and independent moving image culture, showcasing the innovative edge of international contemporary media art both on and off the screen. Alongside film and video screenings, the festival presents groundbreaking live performances, media art installations in 14 local art galleries and new media projects by many renowned Canadian and international artists