This goup show brings together nine international contemporary artists from the generation that emerged in the first decade of the new millennium. The participants in "How to Work" deploy an array of strategies that demonstrate a notable political and ethical awareness, acutely conscious of the present art world economy and its instant commodification of any work made within (or without) the system. 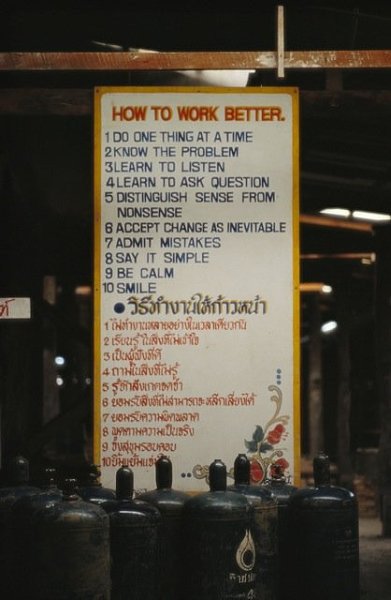 The exhibition "How to Work" at Kunsthalle Basel brings together nine international contemporary artists from the generation that emerged in the first decade of the new millennium. Collectively, their practices, however varied, are indebted to Conceptual art of the 1960s and '70s, as well as its manifold incarnations in the later, neo-Conceptual work of the 1980s and '90s that, following the seminal "Pictures" exhibition curated by Douglas Crimp in 1977, critically engaged with politics of image- and object-making. In the 1960s, Conceptual art consciously mirrored the larger economic change from an industrial to service-based economy that had been taking place since the '50s, as fields like advertising and information technology gradually advanced and more traditional industries went into decline.

To that end, the participants in "How to Work" deploy an array of strategies that demonstrate a notable political and ethical awareness, acutely conscious of the present art world economy and its instant commodification of any work made within (or without) the system. They use found objects and material sourced from the Internet, they document or straightforwardly imitate the reality that surrounds them in order to achieve the estrangement of all-too-familiar content, they stage performative interventions simulating and twisting reality, they perform a détournement on classical techniques and genres, and they employ seriality or chance procedures to make their works.

"How to Work" attempts to look at possible ways of how one works as an artist today. The question of how to work in this cultural and political moment, and what that work should consist of, needs to be renegotiated or answered in a new way. The contemporary artists' approach to work can be contextualized within the broader shift from material (manual) to immaterial (mental) labor, which is an indelible aspect of the change from an industrial economy (focused as it is on the manufacturing of specific products) to a service-based economy (providing as it does "solutions"). Even more recently, the knowledge-based economy has come to the fore, in which what matters is not the fixed and ready-available product or the way it is distributed, but how customers (now called participants) relate to each other. To counter the growing sameness of human relationships in the existing utopia of a global society that is composed of sharing, creative individuals, the artist's work should make a difference. But can the very idea of making a difference be trusted?

The title of the Kunsthalle Basel exhibition quotes the artwork "How to Work Better" (1991), a ten-point manifesto by the Swiss artist duo Fischli and Weiss. Painted in large stenciled letters on the façade of an office building in Zurich, the titular work comprises ten short persuasive sentences (such as "know the problem" or "accept change as inevitable") on how to work better, aimed at influencing the attitude of workers in order to improve the workplace environment, motivate creativity, and boost the quality of production - whatever it may be, wherever it is. At the same time, these new ten commandments seem to be retrieved from a creative director's desktop trash folder (in former times, it used to be a dustbin), rather than invented by the artists themselves. The manifesto is patently generic, not tailored for any particular type of business, and the formulas it contains are so superficial that they can be read as a critique of the "aesthetics of bureaucracy" (a term often applied to Conceptual art, too), itself used as a cover for the constant strive toward the enhancement of "intellectual services" and the corresponding loss of tangible content in today's creative industries, art included.

Fischli and Weiss's "How to Work Better" also reads as a formal take on Conceptual art masterpieces like Lawrence Weiner's enigmatic text works in block letters executed in galleries and public spaces around the world, or as a parody of formulations used in Sol LeWitt's "Sentences on Conceptual Art" (1969), which include "Successful art changes our understanding of the conventions by altering our perceptions". Interestingly, the source of the Fischli and Weiss work was a freestanding signboard featuring motivational sentences in English and Thai that the artists photographed in a pottery factory in Thailand in 1990. As cheap labor attracts global manufacturers to Thailand, local workers often travel abroad to find work, seeking better employment conditions. The motivational sentences appear to be gleaned from a Western European management manual, but when placed in a Thai factory, they immediately acquire an additional, distinctly Eastern flair. The Zen-like statements of "How to Work Better" seem to have lost their original intent in multiple translations - and money flows - across cultures and contexts.

The selection of works in "How to Work" at Kunsthalle Basel does not follow a thematic criterion, although many of the pieces exhibited address the economy of their own making and the way it relates to the larger economy. Accordingly, the title of the show is meant as a general framework of the question that every artist and worker today must face, and not as a fixed "theme" that the works should themselves illustrate. Rather than insisting on boosting quality, and instead of explaining "how to work better", the exhibition proposes a critical reduction of the question, asking modestly how one works at all, now.

The exhibition has been generously supported by Annemarie Burckhardt. With additional support by Roldenfund.