Passengers. This exhibition presents at both Peter Blum galleries, more than 200 photographs taken by Marker between 2008 and 2010 in the Paris Metro. In several of the shots, we see whole train cars filled with similarly disengaged people. This series very clearly illustrates the various ways in which people create invisible walls and boundaries in order to cope with modern urban life. 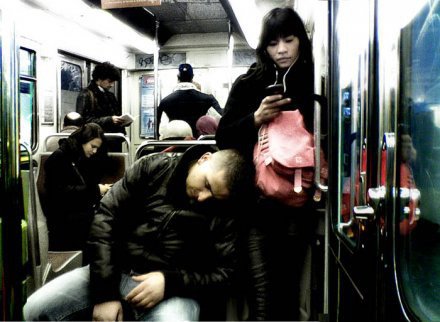 Peter Blum is pleased to announce the exhibition Chris Marker, PASSENGERS. This exhibition, opening on April 2, 2011, will be presented at both Peter Blum Soho (99 Wooster Street) and Peter Blum Chelsea (526 West 29th Street). This will be Chris Marker’s third solo exhibition with the gallery.

The exhibition is comprised of more than two hundred photographs taken by Marker between 2008 and 2010. The series, which is Marker’s first in color, are images of passengers traveling on the Paris Métro.

PASSENGERS captures the many private actions and gestures that take place daily in the public sphere. Mothers cradling their children, couples whispering intimately, women wistfully staring out the window or into the middle distance, engrossed in their own personal thoughts. In several of the shots, we see whole train cars filled with similarly disengaged people. Taken as a complete body of work, this series very clearly illustrates the various ways in which people create invisible walls and boundaries in order to cope with modern urban life. Chris Marker further to the photographs he takes, enhances, changes or colors his images on the computer, giving them often an eerie, almost otherworldly presence.

All of the images will be reproduced in a book published by Peter Blum Edition, which will be released in conjunction with the exhibition. The book will feature over two hundred color images with texts by Chris Marker and Peter Blum.

The exhibition will travel to France where it will be included as part of the internationally renowned Les Rencontres d’Arles Photographie Festival in the Summer of 2011.

Born in Neuilly-sur-Seine, France in 1921, Chris Marker is one of the most influential and important filmmakers to emerge in the post-war era. Marker appeared on the Paris cultural landscape as a writer and editor and also became identified for his uniquely expressive non-fiction films. Marker began garnering international recognition in 1962 with the science-fiction short film La Jeté. In the seventies Marker created documentaries both on the history of the left (Le Fond de l’air est rouge, 1977) and travel and memory (Sans Soleil, 1982). Marker has also produced acclaimed media installations, including Owls at Noon Prelude: The Hollow Men, shown at New York’s Museum of Modern Art in 2005 and presented by Peter Blum at Art Basel Unlimited in 2006, and Silent Movie, commissioned by the Wexner Center for the Arts in 1995 and which subsequently traveled internationally. Additionally, he has been included in exhibitions at the Walker Art Center, Minneapolis; MoMA PS1 Contemporary Art Center, New York; The Centre Georges Pompidou, Paris; The Jeu de Paume, Paris; The Douglas Hyde Gallery, Dublin, and Fundació Antoni Tàpies in Barcelona.