Holodecks (And Other Spaces)

A holodeck is a state-of-art virtual reality facility, located on starships and star-bases in the fictional Star Trek universe. New York-based artist Danna Vajda's rendering of the holodeck envelops the entire exhibition space turning it a simulation of itself: a gallery within a gallery with the potential to transform into anything one can imagine. In dialogue with Vajda, Berlin-based curators Aileen Burns and Johan Lundh have selected artists and artist groups to respond to the environment during weekly events. 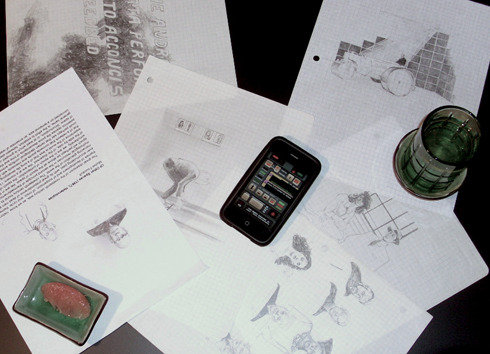 A project by Danna Vajda developed in collaboration with Willie Brisco

A holodeck is a state-of-art virtual reality facility, located on starships and star-bases in the fictional Star Trek universe. First introduced in the pilot episode of Star Trek: The Next Generation: Encounter at Farpoint in 1987, holodecks became a reoccurring feature of the series for the coming seven years. New York-based artist Danna Vajda’s rendering of the holodeck envelops the entire exhibition space turning it a simulation of itself: a gallery within a gallery with the potential to transform into anything one can imagine. Unlike in Star Trek, the actual exhibition space is created with the simplest materials possible, tape and paint.

Holodecks (And Other Spaces) unfolds through five sequential episodes, each with a structure that tests the idea that a holodeck is an environment loaded with infinite possibilities. In dialogue with Vajda, Berlin-based curators Aileen Burns and Johan Lundh have selected artists and artist groups to respond to the environment during weekly events. Each contributor has a practice that engages with the motives and possibilities of science fiction as both a cultural phenomenon and a space for envisioning a future horizon.

Vajda’s reframing of FormContent invites us to reflect on the most prevalent context for exhibitions, to reveal their conventions, and envision a gallery space differently. On the opening night, Episode I, Vajda introduces the holodeck and its relation to Michel Foucault’s notion of heterotopias as outlined in his essay Of Other Spaces (1967). Her performance will be intertwined with a lecture-performance by Frankfurt-based artist Willie Brisco who will provide an accelerated art-history of the project and at the same time situate it within a lineage of art in the imaginary realm.

Burns and Lundh share an interest in science fiction, narrativity, and generating spaces for galvanizing imagination and inspiring action. For Episode II, they will be available for a series of improvised, make-believe, tours of the project throughout the day. A Star Trek The Next Generation marathon will run concurrently.

As an insertion in the space, Vajda has created collaborative poster by New York-based artist Fia Backström, This conversation piece is tied to their interest in the limitless simulacrum of the Star Trek universe, the abstraction of capital in the series, and in the global economy of the late 20th century. This ‘other space’ forms an integral part of Star Trek in which capital has been rendered invisible and exchanging cultural difference is the only identifiable economy.

In dialogue with these concerns is Episode III, a evening screening of video works artist videos using fantastical narratives or science fiction to talk about the abstraction of capital and financial crisis. This episode will feature: Melanie Gilligan (Popular Unrest, 2010); The Otolith Group (Otolith III, 2009); and Superflex (The Financial Crisis, Sessions I-IV, commissioned by Frieze Film and Channel 4, 2009).

For Episode IV, London-based artist Patrick Staff will lead an informal discussion and guided meditation with Suzanne Corbie. The session will take a small group of participants on a shared psychic journey to explore inner or dream like spaces through concentration, visualization and insight. Drawing upon a collective energy and shared experience, we will explore alternative methodologies and spaces for engaging with collaboration, parallel play, practice, and creativity.

Episode V, the exhibition’s finale, will be orchestrated by the Directors of FormContent, Francesco Pedraglio and Pieternel Vermoortel. They will reflect on the events that transpired within the holodeck and produce the End Credits.