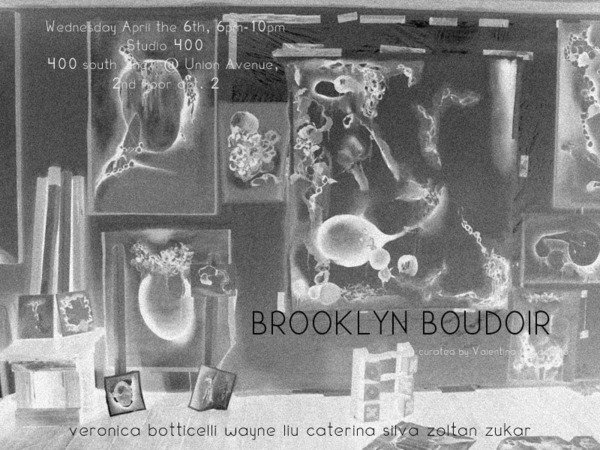 Historically belonging to the private suite of the rooms of a lady, the boudoir was used for bathing and dressing, embroidering or spending time with one's romantic partner. Generally conceived as a little room, beautifully decorated, covered by feathers, mirrors and perfumes of precious kind, the boudoir gained its legacy by embodying the sensuality of secrets memories and hidden writings.

If time have passed and changed, small boudoirs can still be found anywhere, concealed into the imagination of dusty and hip suburbs. Here’s one, where four artists have casually met and disclosed their private speeches. Four stories coming from different lands, passionately bond by the Brooklyn evening light and forming a tactile pattern where the public can finally touch what’s going on.

Traces, gestures, thin words, soft nuances, unusual sets, are the common background for this show. Along with a master reference: Louise Bourgeois Sunday Salons, where people and artists with painting and oeuvres in their pocket would go and face the art audience in an unconventional atmosphere.

Veronica Botticelli: modern heir of a secular tradition, she is a painter who lives and works in Rome, in the suburb factory of Via Arimondi, currently center of a very fervid wave. In her vivid, obscure background, uninhabited stages narrate out loud the life and diaries of many souls.

Wayne Liu: born in Taipei, TW, he lives and works in New York. His sophisticated photography performs a cinematographic regard and a very personal form of displaying it. Materials of common uses, from metal to plastic, function as the singular frames for the stories he catches.

Caterina Silva: coming from the same roman factory of Via Arimondi, she lives and works in Roma. Her art explores the limits of painting through performative attitudes. Connecting gestures, mental structures and written language she relates paintings to the space to other objects\texts and to the audience.

Zoltan Zukar: French polish master, his photography have been rescued by an old suitcase stored in the archive of Rossini Family in Tuscany. His outstanding technique of images serials opens a reflection over the actual practice of making pictures.