Opening on April 9, SALT Beyoglu, the first of SALT's two venues to be inaugurated this year, establishes its program with 'I am not a studio artist' - a comprehensive exhibition of Huseyin Bahri Alptekin, Laboratory ars viva 2010/11, along with the building's newly formed spaces: the Forum, Walk-in-Cinema, Garden, Cafe' and Shop. 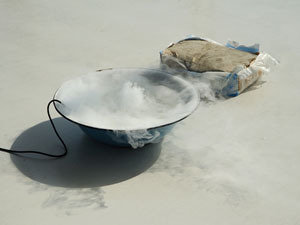 Opening on April 9, SALT Beyoğlu, the first of SALT's two venues to be inaugurated this year, establishes its program with "I am not a studio artist"—a comprehensive exhibition of Hüseyin Bahri Alptekin, Laboratory ars viva 2010/11, along with the building's newly formed spaces: the Forum, Walk-in-Cinema, Garden, Café and Shop.

The theme of the ars viva 2010/11 competition, Laboratory, seeks to explore the act of experimentation—of approaching problems in art with the systematic trial and error that, traditionally, we are used only to seeing in the context of scientific practice. The exhibition series asks: what happens when artists apply scientific methods to their work? Is it possible, when we introduce the framework of the laboratory into the artist’s studio, for the artistic process to become just as—or more—meaningful than its product? The selected ars viva 2010/11 artists Nina Canell, Klara Hobza, Markus Zimmermann and Andreas Zybach expand on the classic notion of science, make new discoveries, and perhaps, through experimentation, produce visible, tangible errors.

Canell, Hobza, Zimmermann and Zybach have been asked by SALT to also consider the site and context of the institution and its new exhibition spaces. The proposed projects include an intervention by Canell that refers to aspects of the renovation process that she experienced while on residency in Istanbul in January; reflections by Hobza on her quest to dive the length of the Bosphorus; and installations by Zimmermann and Zybach that introduce new dimensions to the spatial composition of the gallery space.

Laboratory, ars viva 2010/11 is co-organized and supported by Kulturkreis der detschen Wirtschaft im BDI e.V. (Cultural Committee of German Business). Since 1953, the ars viva prize for fine arts has been awarded to promising young artists based in Germany. Each year the competition adopts a different search term that takes current tendencies in contemporary art into consideration. An intensive jury process then completes three rounds of investigation to select the awarded artists. The artists selected for ars viva 2010/11 presented their works at Kunstsammlungen Chemnitz (October 17, 2010 – January 16, 2011), and following SALT, the exhibition program will conclude at the Kunstmuseum Stuttgart (June 18 – October 23, 2011).

Starting in the early 1990s, Hüseyin Bahri Alptekin—an artist, thinker, teacher, writer and curator who passed away in 2007—focused on an artistic production that explored effects of globalization, cross-cultural image circulation, immigration and exile. Beginning with his early co-authored work with Michael Morris, Alptekin was a determined collaborator interested in authorless production, and went on to form many groups throughout his career such as Grup Grip-in, the Sea Elephant Travel Agency and the Bunker Research Group. His multi‐referential work consists of photo‐installations, collages, videos, objects, and large-scale production such as a life‐size truck overloaded with colorful plastic soccer balls, which together express a multi‐layered, complex visual language. The exhibition at SALT Beyoğlu will showcase a selection of works that will allow visitors to get acquainted with the themes Alptekin explored as well as experience the variety of media he employed, ranging from his early collages to his highly complicated “heterotopia” installations, from his etymologically playful neon works to the poignant videos he showed at the Turkish Pavilion at the Venice Biennale in 2007. The exhibition is planned as the most comprehensive presentation of his works to date, both in Turkey and internationally. In addition to this extensive look at Alptekin’s oeuvre, “I am not a studio artist” will also include newly commissioned works by five artists who will be responding to Alptekin’s life as well as the themes and issues that informed his practice. These artistic interventions will be undertaken by Can Altay, Gülsün Karamustafa, Gabriel Lester, Camila Rocha and Nedko Solakov, who were all key figures in the artist’s life.

HÜSEYİN BAHRİ ALPTEKİN
Artist, writer, lecturer and curator Hüseyin Bahri Alptekin (1957-2007) studied aesthetics, philosophy of art and sociology in Istanbul and Paris. After working as a photographer for SIPA Press and writing for various publications as an art and design critic, Alptekin lectured at Bilkent University and İstanbul Bilgi University, and participated in many panels and symposia on contemporary art, both locally and internationally. In 2007, he represented Turkey in the 52nd Venice Biennale with his installation Don’t Complain. The same year, he participated in the exhibition Global Cities at Tate Modern, London. Between 2000 and 2004, Alptekin ran the non-profit artists’ collective Sea Elephant Travel Agency, which hosted a residency program for artists and organized conferences. Exhibitions in which Alptekin participated include the São Paolo Biennial (1998); Cetinje Biennial (2002), where he won the UNESCO Prize; How Latitudes Become Forms, Walker Art Center (2003); Manifesta 5 (2004); 3. Tirana Biennal (2005); and the International Istanbul Biennial (1995, 2005).

CAN ALTAY
Can Altay completed his PhD in design and architecture at Bilkent University, Ankara in 2004. Since then, he has exhibited in Turkey and internationally. Locating his work in the realm of art, architecture, design and theory, Altay focuses on spatial appropriation and re-use, social encounters and impromptu urban situations, and self-regulated urban developments. Among others, he has participated in exhibitions such as Can Altay: No Bar, Just Bottles, The Abstract Cabinet, Sala Rekalde, Bilbao (2006); Making Space (2003), and Art for... (2005), Platform Garanti Contemporary Art Center, Istanbul; Day Labor, P.S.1 MoMA, New York; as well as İstanbul Eindhoven, Van Abbemuseum, Eindhoven. He also participated in various biennials, including the 8th Istanbul Biennial, Busan Biennial (2006) and Taipei Biennial (2010). Altay co-curated Open City Istanbul with Philipp Misselwitz in partnership with the 4th International Rotterdam Architecture Biennial (IABR), which brought together 3 exhibitions: Open City Forum (co-curated by Tim Rieniets), Refuge and Bas Princen–5 City Portfolios.

GABRIEL LESTER
An artist and filmmaker, Gabriel Lester came to international prominence with his videos and installations. His installation The Beautiful Gamble for IASPIS, Stockholm, or his Piano Pay Off, in which he brings together the soundtracks of black and white silent films, both illustrate his interest in the concept of time that recurs in many of his works. Among his solo shows are The Gift of Gab, Platform Garanti Contemporary Art Center, Istanbul (2002); The Clock and the Clockwork, Gallery Fons Welters, Amsterdam (2003); and Big Bang, Bloomberg Space, London (2007). He has also participated in the Gothenburg Biennial (2005); Netherlands Film Festival, Utrecht (2006); and Performa, New York (2009). Lester’s work is part of several public and private collections, such as the Stedelijk Museum, Amsterdam, and Museum Boijmans Van Beuningen, Rotterdam.

CAMILA ROCHA
Brazilian artist Camila Rocha, who is also Hüseyin Bahri Alptekin’s wife, explores endangered plant motifs and their relation to the contemporary world in her works. In addition to her drawings, videos, photographs and performances, Rocha designs exhibitions and books. Together with Alptekin, she was involved in the Barn Research Group (BRG). She has participated in exhibitions in Lille, Ljubljana, Lisbon, Tirana, Rio de Janeiro, Helsinki and Istanbul, among others.

NEDKO SOLAKOV
Bulgarian artist Nedko Solakov has displayed his stance against totalitarian regimes since his exhibition of wall paintings in the Fine Arts Academy in Sofia. From his works on paper that depict ordinary as well as surreal stories, to his Black and White wall painting in Norwich, Solakov has developed a performative conceptual practice. His works deal with life with a certain sense of humor, while he continues to question systems of representation with a dose of melancholy. The exhibitions he has participated in include Stories 1, Center for Contemporary Art Ujazdowski Castle, Warsaw (2000); A (not so) White Cube, P.S.1 MoMA, New York (2001); Romantic Landscapes with Missing Parts, Museo Nacional Centro de Arte Reina Sofia, Madrid (2003); and A High Level Public Art Project with a Catalogue, Malmö Konsthall (2004); as well as the 3rd, 4th and 9th International Istanbul Biennials (1992, 1995 and 2005, respectively) and the 52nd Venice Biennale (2007).