McCrea is interested in how the photographs from this project can be transposed to new contexts, suggesting new readings and drawing out new ideas. To this end the exhibition features new photographs, an audio work, a slide projection work, which elaborate the artist's concerns on these themes in the gallery context. 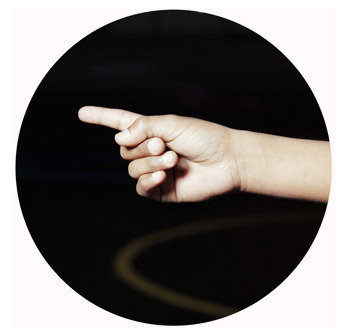 Ronan McCrea’s first solo exhibition at Green on Red Gallery combines photographs from his recent School Play project with new works that further elaborate themes of play and educational institutions in relation to the photographic and cinematic image, subjectivity, and artist’s ongoing interest in the form and function of highly symbolic social spaces.

School Play was a public art commission for Castleknock Educate Together School in Dublin 15, completed in 2009. For this work McCrea made a permanent architectural intervention in the form of a painted set of circles and arcs on the school yard for the (unspecified) use of children at play. This design also then functioned as a kind of ‘set’ for a series of photographs shot from an elevated position of children during break-times. These images reframe the children’s exuberant movements and interactions as a kind of choreography, and in their composition recall the angles and framing of Rodchencko’s photography of the early Twentieth Century. A set of these photographs is now permanently installed in Castleknock Educate Together School building.

McCrea is interested in how the photographs from this project can be transposed to new contexts, suggesting new readings and drawing out new ideas. To this end the exhibition features new photographs, an audio work, a slide projection work, which elaborate the artist’s concerns on these themes in the gallery context.

New work includes the film Autodidact involving a series of vignettes that portray a child ‘interacting’ with a university campus and a projected slide work The Rhetoric of Play (three pictures in variable sequence) where photographic images of play are constantly reshuffled, in semaphore-like variable sequences.

The background context of this exhibition is how highly symbolic social spaces of educational institutions and the trope of ‘play’ are both sites of contested signification, social and ideological anxiety, instrumentalisation, and ever increasing commodification - while recent artistic discourse has debated its own “educational turn.”

Ronan McCrea (b. 1969) lives and works in Dublin. He has exhibited nationally and internationally for many years, making projects and exhibitions in many different contexts. Recent projects include The Lost Photographs of Alfred H at the Third Sinop Biennial, Turkey (2010), New Town Centre Project (Extract #1) produced with Draiocht, Blanchardstown (2008), Medium (Corporate Entities) a project for the Irish Museum of Modern Art '10,000 to 50' exhibition (2008). Previous solo exhibitions include Project Arts Centre, Glassbox Paris, Galway Arts Centre and public art projects for BBA Heathrow Airport, Dublin City Council and Castleknock Educate Together School. In 2005, McCrea was one of the artists who represented Ireland at the Venice Biennale.
http://www.ronanmccrea.com

AUTODIDACT will be followed by an exhibition of new paintings by John Cronin, opening Thursday 19 May. For further information please contact Jerome O Drisceoil or Mary Caffrey at T: 00353 1 6713414 or