A comprehensive overview of Bela Kolarova's oeuvre, featuring around 40 works ranging from early examples such as the X-ray photographs and vegetage photograms to her more explicitly feminist works, such as a series of assemblages of knots of hair and the very personal collages from the 1970s and 1980s. Her work is showing together with those of Lucie Stahl (*1977), which possess certain formal similarities despite the fact that they were produced much later and under very different conditions. 'Millions of Lights', by Claus Richter, explores the theme of escapism, and the materials it presents point out the historical parallels between the worlds of art and entertainment. 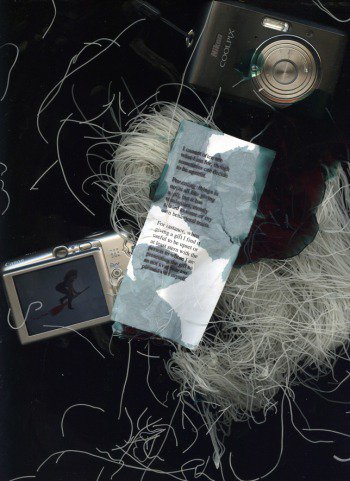 Prague-based artist Bela Kolarova (1923-2010) began experimenting with photographic techniques in the early 1960s, creating photograms and X-ray photographs that continued the Bauhaus tradition of photography as an abstract medium. Thus, for a series of photograms she called vegetages, she produced miniature “artificial negatives” by pressing natural materials into soft paraffin and using them for the exposure of the photographic paper instantaneously as “negatives”.

Despite its formal similarities with avant-garde experimentation, Kolarova's work has only gained international attention in the last few years. The exhibition at Kölnischer Kunstverein provides a comprehensive overview of Kolarova’s oeuvre, featuring around 40 of her works, ranging from early examples such as the X-ray photographs and vegetage photograms to her more explicitly feminist works, such as drawings made using make-up, a series of assemblages of knots of hair and the very personal collages from the 1970s and 1980s. husband was denied permission to return home after a grant had allowed him to stay. In recent years, Kolarova’s work was featured at the documenta 12 (2007), at the Raven Row gallery in London (2010) and in solo shows at the Museum Kampa in Prague (2008) and Muzeum Umìní in Olomouc (2007).

The Kölnischer Kunstverein is showing Kolarova’s works together with those of Lucie Stahl (*1977), which possess certain formal similarities despite the fact that they were produced much later and under very different conditions. Lucie Stahl uses a contemporary photographic technique for her poster-like works, arranging mundane objects such as spices, ties, women’s magazines and wheel rims on a scanner and then encases the resulting inkjet prints in polyurethane like distant objects. The works are annotated with brief text fragments in which Stahl humorously provides her subjective perspective on social and political events and on the competitiveness between artists and the almost-hysterical hype that characterises the art world. Her aphoristic commentary is reminiscent of the language of American stand-up comedy, with short anecdotes in rapid succession and witticisms, recounted as if in a soliloquy, that relate awkward or embarrassing situations, pointed observations on society and her own and others’ comments. The juxtaposition of the texts and the spontaneously reproduced iconic objects creates a tension that has a distancing effect.

Lucie Stahl lives and works in Vienna. She is represented by the Dépendance gallery in Brussels and Galerie Meyer Kainer in Vienna. Her work has been featured in solo shows at the Kunstverein Nürnberg (2009), the Dépendance gallery in Brussels (2005 and 2008), the Michael Neff gallery in Frankfurt (2007), and at the Flaca in London (2005). She has also participated in exhibitions at the Temporary Gallery Cologne (2009), the Croy Nielsen gallery in Berlin (2008), and at kjubh in Cologne (2004). Alongside her work as an artist, Lucie Stahl also manages the Pro Choice gallery space in Vienna in conjunction with Will Benedict.
This exhibition was organised in cooperation with Stadtgalerie Schwaz. An artist’s book by Lucie Stahl will be published to accompany the exhibition featuring an essay by Chris Kraus, among others.

Guided tours of the exhibition

The exhibition of work by Bela Kolarova and Lucie Stahl was made possible by funding from the Czech-German Fund For The Future, the Schroubek Fonds, Munich, and the Karin Abt-Straubinger Stiftung. We would also like to thank the Seilern Collection in Vienna, Werkladen in Cologne, Artex Art Services, Ulrike Remde, Kurt and Claudia von Storch, Koellefolien and Filmclub 813 for their support.

Claus Richter, Millions of Lights
in the archive series The crucial point

Miniature pink Walt Disney Cinderella castles, whole villages of tiny Polly Pocket houses, layered cream cakes made of plastic, masks and laser swords, photographs of adventure and fantasy worlds in theme parks – for this year’s archive project Millions of Lights, Claus Richter will trawl through his own archives of toys, novelty items and photographs to build a small theme park revealing his own, very personal take on the seductive dream worlds of Disneyland, Phantasialand and Hollywood studios.

Millions of Lights explores the theme of escapism, and the materials it presents point out the historical parallels between the worlds of art and entertainment – and if you look closely, they paint a very revealing picture of how we construct our world.

The work of Claus Richter (*1971) was recently shown in a major solo exhibition at the LeopoldHoeschMuseum in Düren. He has also had solo shows at Kunstverein Braunschweig (2008), the Ursula Blickle Stiftung in Kraichtal, the Museum für Gegenwartskunst in Siegen (2005) and at the Clages and Eva Winkeler galleries in Cologne. He presented his exhibition Après Crépuscule at the Kölnischer Kunstverein in 2009 and has since held a studio grant of Kölnischer Kunstverein at the ChocolateMuseum in Cologne. Millions of Lights is part of the Antenne Köln series.

In the project Der springende Punkt, artists and curators work with archives of individuals and institutions pertaining to contemporary artistic and curatorial positions. In each instalment of the series, a single artist or curator chooses aspects of the archive they are working with to focus on and emphasize. In 2007 Marcel Odenbach presented an archive project on Happening und Fluxus, a Kunstverein exhibition in 1970. The exhibition The Soliloquy of the Broom by Olivier Foulon, a project inspired by the Proust archive of Prof. Reiner Speck, followed in 2008. In 2009 Oliver Tepel presented the group exhibition Après Crépuscule. In his project in 2010, which was shown alongside the exhibition Forbidden Love: Art in the Wake of Television,Simon Denny presented material on Judith Barry and Ken Saylor’s design for the exhibition From Receiver to Remote Control, which was shown at the New Museum in New York in 1990.