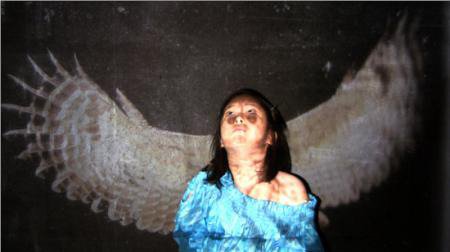 Access to the exhibition is through a modified entrance, where an inclining passageway reduces the neoclassical gallery's high doors to human scale. The primary source of Kim's poetic and inherently topical film works, drawings and performances is the corporal and spiritual relationship of a person to his or her surroundings - to other people, language, architecture, the state or historical events. Growing up in South Korea in the 1980s, Kim initially studied architecture in Seoul before immigrating to the US, where he subsequently studied mathematics and art (with, among others, American performance artist Joan Jonas) at MIT in Cambridge, Massachusetts. Kim was a resident at the Rijksakademie in Amsterdam in 2004 and 2005, before moving in 2009 to New York, where he continues to live and work.

In his work, Kim manipulates various textures and transparencies in order to probe what it means to be from somewhere at all, and not from a particular place, be it East Asia or New York. His films and performances are enigmatic and mythical; rather than linear narratives, the forms his works take are more reminiscent of song structures. The genre of song is found in every culture, and is regarded as the primal form of poetry. Accordingly, lyrical characteristics like repetition, rhythm, transformation and the superimposition of motifs find a place in all of Kim's works. Furthermore, for the past five years, he has been collaborating with musician and singer David Michael DiGregorio (aka dogr) who combines in his music the archaic chant forms with contemporary pop influences. DiGregorio's spherical sound and haunting vocals are primary elements of Kim's films and performances, which, in their intensity and through the use of elements such as masks and other symbolically charged objects, recall ritual actions. Kim's works, however, also relate to the tradition of more contemporary performance and theatre art.

By means of black and grey carpeting, as well as darkly painted walls and occasional touches of colour, Kim has created an environment within the Kunsthalle that could be described as an echo chamber - an echo chamber for the wall drawings and the three existing film works that are being presented here jointly for the first time, and also for the multiple layers of narratives, images and sounds that overlap each other, merging into a completely immersive environment that the viewers can experience individually in the installation's intimate setting. In addition, taut wire is strung across the space like the strings of an instrument, creating both a compositional element as well as a (potential) source of sound.

At the entrance of the large gallery is situated "Drawing Video" (2007), which combines Kim's different working methods in an exemplary way. The work is a compilation of three stagings of the 2007 performance Pushing against the air, which formed part of the "In the Room" series that Kim and DiGregorio developed between 2006 and 2009. In one part of the performance, Kim conducted a conversation with DiGregorio and Byungjun Kwon while simultaneously drawing on tracing paper, an action that was recorded on film. In this analogue, real-time animation, Kim creates surreal schematic figures - a woman whose heart is located in her throat rather than her chest, a man with spots on his face - by employing a method similar to automatic writing. This "live drawing" not only evokes the relationship we have with our own bodies, but also a larger and more general feeling of otherness.

"Ungbyeon" and "guyeondonghwa" were two forms of narrative that were taught at South Korean schools during the Cold War sometimes in order to improve the students' speaking skills. While the first focussed on speaking in public and was mainly taught to boys, the second incorporated gestural speech and body language and was intended for girls. "Washing Brain and Corn" (2010), the central work in the Kunsthalle's large gallery, refers to a story from 1968 that was popularized by these narrative forms. It concerns a boy whose mouth was ripped open by North Korean spies after he told them "Nan kongsan tang ee sil eu yo", or: "I hate the communists". Utilizing simple analogue means, Kim generates highly intense, dreamlike video images that address dated anti-communist propaganda in the context of armistice: a military assault is re-enacted as a short-lived tableau vivant, an old Korean machine to make popcorn (kang naeng ee) evokes associations with a military canon and Kim uses an overhead projector to draw on the face of his niece while filming her, a young Korean raised in the US whose relationship to the story of the boy is purely fictitious.

The materiality of surface - the very skin of things - plays a special role within Kim's work. While the Kunsthalle's walls are covered in chalk drawings, semitransparent fabrics and reflections are utilized as a means of conjuring symbolic images. Moreover, the camera lens itself becomes not only an observer but, via tracing paper, also an image support - and, in this, a kind of canvas. Likewise, Kim works with different textures in the two rear galleries as well, both of which are again accessible by an entrance (in this case equipped with an integrated halfway mirror) that has been reduced insize. The first gallery is completely covered with black carpet; the further, smaller space contains an arrangement of various layers of fabric with a table - set with a green-painted guitar and a cobbler's stand - positioned behind them. In addition to a blue mosquito net (common to Korea) draped over the windowpane to form a crest-like emblem, Kim also uses the white synthetic material employed in the garden of the Kunsthalle, where it serves as cover for the temporary building site.

"Manahatas Dance" (2009), the video work from which the installations in both spaces derive their names, centres on the urban development of Manhattan, as well as New York's status as a city of immigrants and a location of desire. The film was made in 2009, the year that Kim turned 33 and moved to New York. It was also the year of the American presidential elections that brought Barack Hussein Obama - an embodiment, then, of hope and change - to the White House. In Kim's work, Manhattan's regulated public space becomes a stage for a series of performances narrating an idiosyncratic and individual story. "Manahatas Dance" is a filmic essay about heimat and dislocation, the desire for better living conditions and the search for a space that can be created and adapted individually.

One week before the opening of "Line Wall", a private presentation entitled "a short presentation of several moments (or Habeas Corpus)" by Kim, DiGregorio and their collaborator Lisa Lightbody took place in the Kunsthalle. In the piece, Lightbody sat on an elevation in the corner of the gallery - that is now used for one of the speakers - while Kim asked her questions and made drawings at the same time. Before the performance, DiGregorio had set up his instruments - among them the aforementioned guitar and cobbler's stand - in the last space; as it went forward, DiGregorio began interpreting Kim and Lightbody's conversation through singing and playing music. Kim's questions and her answers departed from Lightbody's role as an attorney, and circled around different legal issues such as habeas corpus (Latin for, literally, "you should have the body"), which in legal terms states that the measurements holding someone in custody are not approvable without adjudication, these terms became refrains through repeated, rhythmical chants. Meanwhile, projected drawings and a reading out loud from one of Rainer Maria Rilke's "Sonnets To Orpheus" (Book II, 23) evoked the performance's central theme: the tension between law and the individual body.

An important part of the exhibition is the artist's book "Ki-da Rilke": In the book, the artist engages with the work of the aforementioned German poet Rainer Maria Rilke (1875–1926). The first part of "Ki-da Rilke" features a transcription and drawings of Rilke's collection New Poems (1907) in the German original on thin sheets of paper and note sheets. The second part features Kim's drawings inspired by Rilke's Sonnets to Orpheus (1923), that then further developed into the third part, an independent picture story with recurring characters. These figures are named on an index on loose sheets of paper. The book's inherent theme - that of the metamorphosis of humans and things, language and forms - and the transparency and double-sidedness of the drawings are reflected in the works in the exhibition: the element of duality is recurring in the show and Rilke's poems are quoted in all films. For instance, in "Manahatas Dance", the line "the first star is the last house" from the poem "The Reading Man" from "The Book of Images" forms a refrain that talks about both sides of leaving a familiar place - Sung Hwan Kim states in the book: "Nostalgia should not keep us from going forward."

Another central element of the book is the "Line Wall" text authored by Kim, which also serves as the title of the exhibition at Kunsthalle Basel. The artist uses the German word Leinwand (canvas) as the point of departure for his text, developing associations in a series of thoughts and images that, just as in his art and performance works, relate to the structure of language and Architecture and lead back to the body. As Kim writes: "If a video could be like an architectural form (a form of labyrinth), this didactic1 wishes to be an entrance to a vestibule; or rather a separate body of architecture conjoined to the former architecture, entrance to entrance, like a kiss."

The publication "Ki-da Rilke" is designed by Robin Watkins, and is published and distributed by Kunsthalle Basel together with Sternberg Press.

The exhibition and the accompanying publication were generously supported by Peter Handschin.