Directions. Italian artis likens her video projections to 'frescoes of light.' Best known for large-scale installations, the artist works from documentary imagery collected from urban night surveillance and military, satellite, and space program footage. The result feels both familiar and mysterious, as the eye struggles to determine the horizon line and read the origins of fields of glimmering lights. Shown on an endless loop, these mesmerizing nightscapes represent the artist's ambition to 'visualize the infinite.' 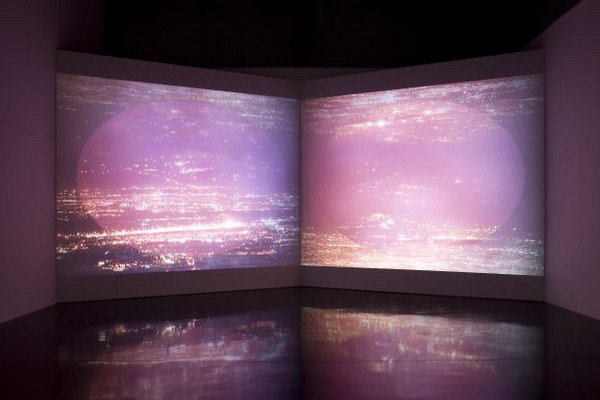 The Smithsonian’s Hirshhorn Museum presents the recent work of Grazia Toderi (Italian, b. Padua, 1963) for the next installation of the museum’s “Directions” series that highlights artists from around the globe working in a diverse array of media. On view April 21–Sept. 5, “Directions: Grazia Toderi” features two large-scale video projections, “Orbite Rosse” (2009) and “Rossa Babele” (2007) and is organized by associate curator, Kelly Gordon.

Toderi traces her fascination with visualizing the infinite to a formative moment in her childhood—watching the simulcast of the first moonwalk. This historic event of “collective unity” parallels the sensibility the artist seeks to affect with the imagery she chooses for her works, which are most often realized as drawings, videos projections and installations. The artist’s process begins with a series of drawing that map the dynamic possibilities for each principal image. For the video works presented in this “Directions” project, the artist superimposed images from photography and film footage and constructed each scenario digitally, with painterly finesse.

For “Orbite Rosse,” Toderi deploys a shade of red that is familiar to urban dwellers as the peculiar coloration that derives from city lights mingling with vapors in the atmosphere. She has mentioned she was inspired by the glimmering, horizon-altering vantage point and vista provided when one flies into a city at night for this piece as well as others. Suspense is evoked by the imposition of the projection’s dual ovals that focus attention, as if some form of surveillance is underway. Across this twinkling expanse, “events” unfold, accompanied by curious, low-level sounds. Open book-like walls provide the projection surface for “Rosso Babele.”

Two glistening pyramids, one upright and one inverted, emerge and float like mystical beacons in an endless sea of light. The title refers to the Tower of Babel story in which mankind, empowered by a common means of communication, attempts to create a structure to link heaven and earth. The effort is upended when divine intervention steps in with an onslaught of various dialects and utter chaos in response to the hubris of this endeavor. In Toderi’s update, the centered structures could also be read as hubs for the beams associated with the common language of today—digital communication. Toderi’s works engage digital technologies, but the artist petitions the viewer to take a break from the perpetual urgency of digitally enabled connectivity and pause, to savor our shared, cosmic connections.

Toderi, who lives and works in Milan and Turin, attended the Fine Arts Academy in Bologna. Since 1994, her work has been featured in gallery and museum exhibitions throughout the world, including biennales in Gwangju, Istanbul and Sydney. Her work has been featured at the Venice Biennale in 1993, 1999 and 2009. In 1999 the artist was awarded the Golden Lion for her contribution to the Italian Pavilion.

On Thursday, April 21, at 5:45 p.m. there will be a free exhibition preview open to the public, followed by a Meet the Artist program at 6:45 p.m. in the Lerner Room. Toderi will present an illustrated discussion of the work on view and her other works in a conversation with Gordon. It will also be accessible through the museum’s podcast library.

The Hirshhorn offers a range of interactive educational experiences designed to engage people of all interest levels in contemporary art. Friday Gallery Talks are weekly lunchtime chats with artists and scholars that focus on one work or exhibition in depth. The museum’s ever-expanding library of podcasts (featured on iTunes in the top 100 Arts and Entertainment podcasts) makes gallery walk-throughs and interviews with artists accessible internationally.