Vija Celmins: Television and Disaster 1964-1966, exploring an essential yet often overlooked period of the artist's work. The exhibition brings to light the artist's ability to appropriate the media of her era to speak to her own background, while offering a distinctive contribution to this cool and aloof aesthetic. Human Nature, Contemporary Art from the Collection features approximately 75 pieces, representing a striking variety of works in diverse media - painting, drawing, photography, video, and audio. 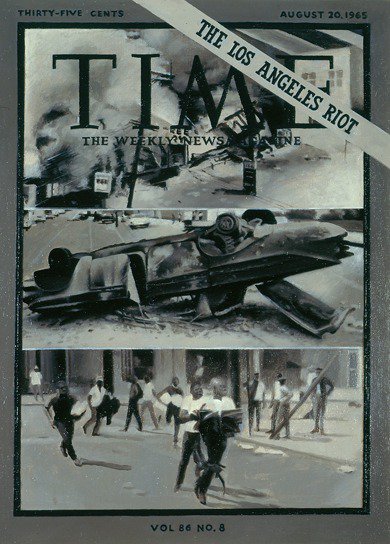 The Los Angeles County Museum of Art (LACMA) presents Vija Celmins: Television and Disaster 1964-1966, exploring an essential yet often overlooked period of the artist’s work. Throughout much of her career, Vija Celmins has been internationally recognized for her meticulously executed paintings and drawings using a monochrome palette of black and gray, depicting starry night skies, ocean waves, barren desert floors, and fragile spider webs. But the images that first grounded her interest as a young artist in Los Angeles during the early 1960s are characterized by violent themes such as crashing warplanes, smoking handguns, and other images of death and disaster influenced by the violence of the era—the war in Vietnam, social change, political assassinations—and the mass media that represented it: newspapers, magazines, and television.

Organized by the Los Angeles County Museum of Art and The Menil Collection, Houston, Vija Celmins: Television and Disaster 1964-1966 is the first exhibition to concentrate on an important segment of Celmins’s art dictated by a specific time and subject matter. Recent survey exhibitions at the Centre Pompidou, Paris, and the Metropolitan Museum of Art, New York, have concentrated on her drawings and prints, respectively. Bringing together paintings and sculptures from national and international museums and private collections, all from a brief three-year period, this exhibition uncovers the technical and thematic groundwork from which Celmins would build her international career.

The exhibition curators are Franklin Sirmans, the Terri and Michael Smooke Department Head and Curator of Contemporary Art at LACMA, and Menil Collection Associate Curator Michelle White. “It was between 1964 and 1966, before she was 30 years old, that Celmins created some of her most important pieces in her Venice Beach studio,” said Sirmans. “She was aware of what was happening politically and socially in the world via television, newspapers, and magazines, and thus her work evolved—entwined with time and memory of family and growing up.”

When Celmins arrived in Los Angeles in 1962, the city’s art scene was realizing its final break with Abstract Expressionism, forging a coolly detached Pop Art aesthetic unique to Southern California. With Walter Hopps’s Ferus Gallery at its epicenter, artists such as Larry Bell, Joe Goode, and Ed Ruscha offered stylistic alternatives to both Abstract Expressionism’s action painting and New York’s bold version of Pop Art. The city’s artists sought inspiration in found art and the painting of common everyday objects, creating a fluid new language to critique the decade’s increasingly commercialized and media-driven culture. Though often associated with the Pop artists of the 1960s, Celmins’s work is equally indebted to Conceptualism.

Never fully linked to the California Pop movement, Celmins is often overlooked as an important figure in post-Abstract Expressionist art. Television and Disaster brings to light the artist’s ability to appropriate the media of her era—from newspapers and magazines to snapshots and television—to speak to her own background, while offering a distinctive contribution to this cool and aloof aesthetic.

Vija Celmins was born in 1938 in Riga, Latvia, and fled with her family to Germany in advance of the Soviet army’s invasion in 1944. Migrating to the United States in 1948 after World War II, the family settled in Indianapolis, where Celmins took art classes and graduated from the John Herron Art Institute with a BFA. In 1961 she received a scholarship to attend the Yale Summer School of Art and Music, where she met artists Brice Marden and Chuck Close. A year later, Celmins relocated to the West Coast to attend graduate school in painting at the University of California, Los Angeles. She has lived and worked primarily in New York since 1981.

The Los Angeles County Museum of Art (LACMA) will display the most extensive presentation of the museum’s permanent collection of contemporary art in ten years. Human Nature: Contemporary Art from the Collection will feature approximately seventy- five pieces, representing a striking variety of works in diverse media— painting, drawing, photography, video, and audio. Borrowing its title from a work by seminal artist Bruce Nauman, Human Nature will survey works by several generations of artists who have made defining contributions to the recent art landscape, from 1968 to the present. Many of the works are on view for the first time since their acquisition, including pieces by Haegue Yang, Leslie Hewitt, Rachel Harrison, Glenn Ligon, Paul Pfeiffer, and Zhang Huan, among others.

Human Nature addresses several significant positions and thematic dialogues, spanning a period known for its plurality of styles. Following a loose chronological path, the show can be entered from the present or the past. At one end are works that straddle the transitional space from conceptual art to minimal sculpture by Daniel La Rue Johnson and Larry Bell, followed by the abstract minimalism of Sol Lewitt, Fred Sandback, and Donald Judd. In a nod to the prevalence of conceptualism since the 1960s there are text works by Mel Bochner, Joseph Kosuth, and Bruce Nauman. An emphasis on the body and performance in the early 1970s is also highlighted in works by Nauman, Lynda Benglis, David Hammons, Ana Mendieta, Hannah Wilke, and Vito Acconci.

The assemblage tradition is seen throughout the exhibition from works by George Herms to David Hammons and Betye Saar to young artists like Amanda Ross-Ho. Existential notions of representation and the self are explored in photography and video works by Lorna Simpson, Yinka Shonibare, Rodney McMillian, Carlee Fernandez, and Nikki S. Lee.

Having recently undergone an extensive conservation effort, Nam June Paik’s Video Flag Z (1986) will be shown in addition to the likewise monumental work 48 Portraits by Gerhard Richter—one of only four photographic sets that Richter made in 1998 after his seminal paintings created in 1972 that filled the German Pavilion at that year’s Venice Biennale. Haegue Yang’s major installation Doubles and Couples (Version Turin) (2008) will be on view for the first time since being acquired in 2009.

There will be a considerable showing of works by young Los Angeles artists that have been primarily acquired in the last five years, including those by painters Mark Bradford, Alexandra Grant, Mark Grotjahn, Elliott Hundley, and Friedrich Kunath, along with sculptor Liz Craft. Additionally, the installation will incorporate some key loans to amplify and extend the selection of works from the collection.

Human Nature: Contemporary Art from the Collection is curated by Franklin Sirmans, Terri and Michael Smooke Curator and Department Head of Contemporary Art, and Christine Y. Kim, Associate Curator of Contemporary Art. A series of performances and film screenings pertaining to the works will also be presented in conjunction with the installation.

Modern and Contemporary Art Council
Celebrating its fiftieth anniversary this year, LACMA’s Modern and Contemporary Art Council (MCAC) has been instrumental in acquiring many works that will be on view in Human Nature. Founded in 1961, the MCAC is the longest-running support group for contemporary art at any museum in the country. Since its inception the MCAC has added nearly 800 works of art to LACMA's collection. The council has also supported the annual acquisition of works by younger Los Angeles artists working through the Young Talent Award (1963–1986) and the Art Here and Now program (1987– present), through which works by Mark Bradford, Aaron Curry, Pae White, and many others were acquired. In honor of its anniversary, labels for all works acquired by or through the MCAC—on view in Human Nature as well as throughout LACMA’s other galleries—are designated with a special identification.