Arizona State University Art Museum presents a number of short films and videos by artists from around the world. The jury process included 482 entries from 43 states and 36 nations, with 20 works selected for screening. 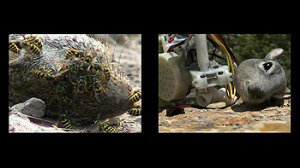 Arizona State University Art Museum is proud to present a number of short films and videos by artists from around the world. Thank you to all the outstanding artists who entered the 2011 Festival. The jury process included 482 entries from 43 states and 36 nations, with 20 works selected for screening.

WORKS SELECTED BY THE JURY FOR THE PROGRAM:

Werewolf Trouble (*Juror Choice Award)
Charlie Anderson
Boston, Massachusetts
Ryan is a werewolf. Horrified to wake up one morning only partially transformed, he enlists his friends’ aid to restore his full human form in time for an important event.

La Piñata
Manuel Arija
Madrid, Spain
Can a street mime cheer you up?

Cousins: a nature memoir
Stephen Ausherman
Albuquerque, New Mexico
A brief message on an answering machine hints at another death in the family.

Perspective
Jon Byron
Orange, California
Three men from three different backgrounds share their introspective view of the world, provoking the realization: We’re not as different as we think we are.

Transferase
Terry Chatkupt
Alhambra, California
Transferase portrays a protagonist overwhelmed with anxiety after receiving a disturbing phone call. What proceeds is a sequence of small events that operate as a psychological excavation, unveiling the rapidly changing and unstable characteristics of both the protagonist and the LA landscape.

Toothless
Steven Dorrington
Essex, England
A mockumentary following the Toothfairy’s transformation as she resorts to inventive but unethical methods of tooth collection in her heinous quest for a better life.
Spectacles
Jeremy Fain
New York, New York
A young artist begins mentally undressing a beautiful passerby, yet each layer of clothing he peels away is followed by another, and another, and another…

It’s Over!
Gita Farid
Mesa, Arizona
A ragtag and beaten French Resistance fighter and a courageous and pissed- off nun risk their lives to protect Jewish orphans hidden in a convent in France.

Whirling Dervish
William Fisher
Denver, Colorado
A thoughtful, enchanting reading of a letter from the past.

Dodo-Valse
Yuliya Lanina
Brooklyn, New York
Dodo-Valse depicts a vision of an idyllic past as seen through the eye of a forest deity.

Dan’s Big Find (**AZ Award)
Jane Lindsay
Tempe, Arizona
The story of a man who finds an arrowhead while shooting targets with his black powder pistol.

La Memoria Die Cani (*Juror Choice Award)
Simone Massi
Pergola, Italy
My cheeks brush against the stone, I look out from a break in the wall.

Pretty Kitty
Gregory McDonald
Burbank, California
A man gets revenge on his cat for taunting him with silence.

La La Love You
Max Sokoloff
San Francisco, California
A teenager gets ready for her boyfriend to come over and gets herself into a difficult position.