IKEA My House Part III is a series of photographs serving as playful interpretations of IKEA's unique product naming convention. Consumers love the idea of owning something that has an exotic foreign name. It imbues each object with a seductive mystique. In this series artist married her love of language with her enduring obsession with the giant Swedish retailer. 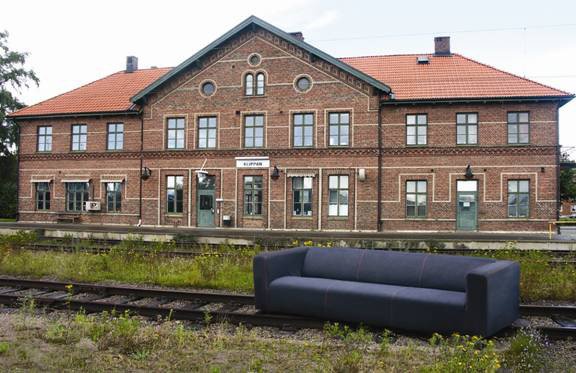 L2kontemporary is pleased to present Felís Stella’s second exhibition with the gallery, opening April 23, 2011 and closing May 21. This exhibition debuted at Elements gallery in Perth, Australia in 2010 and is making its first public appearance in the United States. Heimdal anyone?

IKEA My House Part III is a series of photographs serving as playful interpretations of IKEA's unique product naming convention. Consumers love the idea of owning something that has an exotic foreign name, such as Poäng, or Heimdal or Gutvik. It imbues each object with a seductive mystique. But what do these words really mean? Felís Stella, who had to learn English from scratch when she immigrated to the US from the former Soviet Union, has since been interested in etymology, and in the way word origins affect our perception and interpretation of these words. In this series she married her love of language with her enduring obsession with the giant Swedish retailer.

Ingvar Kamprad, the founder of IKEA, is dyslexic. Instead of using alpha numeric codes for cataloging inventory -- a dyslexic’s nightmare -- he started titling his products with names of various geographic locations in Sweden and Norway, people's names, job occupations, action verbs, and more. Inadvertently, he created a unique retail language of his own.

Stella’s photographs are actually depicting IKEA products -- specifically, furnishings that have been integrated into her own home décor -- in their "native" etymological environments. This series is an excerpt from a visual “dictionary” of Kamprad’s language. A HEIMDAL side table is shown at a Heimdal train station in Heimdal, Norway; a POÄNG chaise rests atop Yaki Point peak at Grand Canyon (poäng means point of view in Swedish); a DOCENT bookcase is shown in a museum gallery, surrounded by a crowd during a docent tour; a couple is having sex atop a GUTVIK bunk bed (gutvik is pronounced goot fick, which means good fuck in German). Ingvar Kamprad himself appears in the print titled IKEA, which stands for Kamprad’s first and last name initials and the initials of the town and farm in which he grew up, Elmtaryd, Agunnaryd.

In IKEA My House: Part III these mundane objects, normally part of our everyday interior landscape, become displaced namesake portraits of unexpected locales, ideas and actions. It is the artist’s hope that these images will inspire viewers to question the obvious and the unknown, and to see IKEA from a different poäng.