The Anthony Caro's installation on The Iris and B. Gerald Cantor Roof Garden features a selection of sculpture in steel, painted and unpainted, spanning the artist's career to date and highlighting principal aspects of his long career. Night Vision:Photography After Dark features photography of the 20th century inspired by the pleasure, danger, and allure of the night and presents 40 black-and-white photographs dating from 1898 to 2000, all drawn from the Museum's collection. 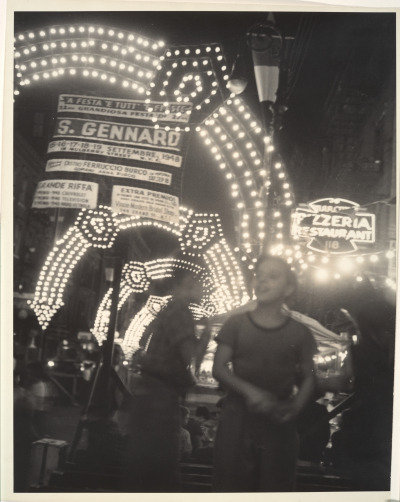 (New York, April 7, 2011)—Sculptures by Anthony Caro (b. 1924)—who is considered the most influential and prolific British sculptor of his generation, and a key figure in the development of modernist sculpture over the last 60 years—will be featured in The Metropolitan Museum of Art's 2011 installation on The Iris and B. Gerald Cantor Roof Garden, opening April 26. The installation will feature a selection of sculpture in steel, painted and unpainted, spanning the artist's career to date and highlighting principal aspects of his long career: engagement with form in space, dialogue between sculpture and architecture, and creation of new, abstract analogies for the human figure and landscape.

This year marks the 50th anniversary of the first exhibition of steel sculpture by the artist, who lives and works in London. The large-scale works on view this summer will be Midday (1960, Museum of Modern Art, New York), After Summer (1968, Collection of Audrey and David Mirvish, Toronto), Odalisque (1984, Metropolitan Museum), Blazon (1987-90, Courtesy of Mitchell-Innes & Nash, New York and Annely Juda Fine Art, London), and End Up (2010, Collection of the artist, courtesy of Mitchell-Innes & Nash, New York). The installation will be situated in the Museum's dramatic, nearly 8,000-square-foot open-air space offering unparalleled views of Central Park and the New York City skyline. Anthony Caro on the Roof will be the 14th consecutive single-artist installation on the Cantor Roof Garden.

Additional support is provided by Cynthia Hazen Polsky and Leon B. Polsky.

"We are delighted to present the work of Anthony Caro, one of the leading sculptors of a generation that produced singularly great, monumental sculpture," commented Gary Tinterow, Engelhard Chairman of the Metropolitan Museum's Department of Nineteenth-Century, Modern, and Contemporary Art. "The first two installations of the Roof Garden in 1987 and 1988 featured his work, and it is a real pleasure to welcome him back. The elegance and wit of the unexpected, delicately colored forms will look marvelous silhouetted against the undulating green carpet of Central Park."

Anthony Caro earned an M.A. in engineering at Cambridge University, studied sculpture at the Royal Academy Schools in London, then worked as assistant to Henry Moore in the early 1950s. After his first visit to the United States in 1959, when he became acquainted with the work of painter Kenneth Noland and sculptor David Smith, he moved away from figurative art entirely. He made his first polychrome sculpture, Sculpture Seven, in 1961, and that same year exhibited the only sculpture (The Horse, 1961) in the New London Situation, an exhibition of "situation paintings" held at Marlborough New London Gallery. Caro came to public attention with an exhibition at the Whitechapel Gallery in 1963, where he exhibited large, abstract, steel sculptures brightly painted and standing directly on the ground, so that viewers could approach and interact with the works from all sides; this represented a radical departure from the way sculpture had been presented in the past and was described by the artist as an attempt "to make sculpture more real." Caro's innovative work was complemented by his teaching at St. Martin's School of Art in London from 1953 to 1981, where he influenced a younger generation of British abstract sculptors including Phillip King, Bruce McLean, Barry Flanagan, Richard Long, and Gilbert and George.

Caro often works in steel, but also in a diverse range of other materials, including bronze, silver, lead, stoneware, wood, and paper. Major exhibitions of his work have included retrospectives at the Museum of Modern Art, New York (1975), the Trajan Markets, Rome (1992), Museum of Contemporary Art, Tokyo (1995), Tate Britain, London (marking his 80th birthday in 2005), and three museums in Pas-de-Calais, France (2008), to accompany the opening of his Chapel of Light at Saint Jean-Baptiste Church in Bourbourg. He has been awarded many prizes, including the Praemium Imperiale for Sculpture in Tokyo in 1992 and the Lifetime Achievement Award for Sculpture in 1997. He holds many honorary degrees from universities in the United Kingdom, United States, and Europe. He was knighted in 1987 and received the Order of Merit from the Queen in May 2000.

Anthony Caro on the Roof is organized by Gary Tinterow, Engelhard Chairman, and Anne L. Strauss, Associate Curator, both of the Department of Nineteenth-Century, Modern, and Contemporary Art at The Metropolitan Museum of Art.

It will be featured on the Museum's website at www.metmuseum.org.

An installation by Tomas Saraceno (Argentinean, b. 1973), rooted in the artist's inventive exploration of new ways of inhabiting our environment—drawing on principles of architecture and engineering, physics and chemistry, aeronautics, and the natural world, and inspired by eco-utopian visions for future sustainable communities—will be on view on the Cantor Roof Garden from April 24 through November 4, 2012.

Sandwiches, snacks, desserts, and beverage service—including espresso, cappuccino, iced tea, soft drinks, wine, and beer—will be available at the Roof Garden Café daily from 10 a.m. until closing, as weather permits. A martini bar will also be open on the Roof Garden on Friday and Saturday evenings (5:30-8 p.m.).

Night Vision: Photography After Dark, on view at The Metropolitan Museum of Art from April 26 through September 18, 2011, will feature photography of the 20th century inspired by the pleasure, danger, and allure of the night. For more than 100 years photographers have been drawn to the challenge of making images after dark, capturing the aesthetic effects of nighttime rain, early-morning fog, shining street lamps, and dimly lit rooms. Modern camera artists have been captivated by glowing skyscrapers, dazzling neon signs, glittering nightlife, and the shadowy realm of the nocturnal underworld. Highlights of the Metropolitan’s exhibition include classic night photography of the 1930s-1950s by Berenice Abbott, Bill Brandt, Brassaï, Robert Frank, André Kertész, William Klein, Weegee, and Garry Winogrand, as well as two early photographs by Diane Arbus that have never been shown or published before, and recently acquired photographs by Peter Hujar and Kohei Yoshiyuki.

Photography in low-light conditions first became possible in the late 1880s with the introduction of the gelatin dry-plate process, which reduced exposure times significantly. Alfred Stieglitz and Edward Steichen were among the first artists to take up the challenge of capturing images after dark. Stieglitz turned his lens on the city in such works as Reflections: Night, New York (1897) and An Icy Night (1898), while Steichen rendered the magic of the woods at dusk in Woods Twilight (1899). Alvin Langdon Coburn, a contemporary of Stieglitz and Steichen, was mesmerized by the glow of Manhattan’s electrified streetlamps, which he compared to stars lighting up the avenue, as in his photograph Broadway at Night (ca. 1910).

By the early 20th century, night photography came into its own as an artistic genre as the technical innovations of smaller handheld cameras, faster photographic film, and commercial flashbulbs freed artists to explore further the nocturnal universe of shimmering light and velvety darkness. Brassaï made his name as a chronicler of Paris after dark with the publication of his book Paris by Night in 1932. The dreamy atmosphere of Brassaï’s photographs is intensified by his preference for shooting on misty nights. “Fog and rain…tend to soften contrasts,” he wrote. “Steam, as well as wet ground, act as reflectors and diffuse the light of the lamps in all directions. Therefore, it is necessary to photograph certain subjects in the rain, since it is the rain that makes them ‘photogenic.’”

Another pioneer of night photography, Bill Brandt portrayed the lives of all levels of British society in both staged and documentary photographs from the 1930s and 1940s. The exhibition will feature four of his works, including Soho Bedroom (1936), depicting a couple locked in a passionate embrace which was published in his influential book A Night in London (1938). Brandt also made night views of London during the Blitz, when the city imposed blackouts. He later wrote: “The darkened town, lit only by moonlight, looked more beautiful than before or since.”

Inspired by Brassaï and Brandt, other photographers began to turn their attention to the social life of the city at night, from the convivial hubbub of Little Italy’s Feast of San Gennaro—as seen in works by Diane Arbus and Sid Grossman—to the top-hatted elegance of opening night at the opera, in a 1955 photograph by Garry Winogrand.

Night photographers have also been drawn to outlaws and lone figures on the margins, picturing the dark hours as a shadowy realm of transgression. Peter Hujar spent many nights wandering the streets of downtown Manhattan with his camera, creating images that exude a sense of expectation and desire. Hujar’s 1981 photograph Man in Park is one of three photographs he made of men cruising in Stuyvesant Square Park.

More recently, artists have adapted techniques of police and military surveillance to pry into hidden corners of the night. In the early 1970s, Kohei Yoshiyuki used infrared film to capture nighttime images of clandestine sexual encounters in Tokyo’s public parks, capturing amorous young couples as well as the peeping Toms who gathered in the bushes to watch them. For his “Night Sun” series (2000), David Deutsch shot overhead views of Los Angeles suburbs at night from a helicopter, illuminating the houses below with a police search light.

Night Vision: Photography After Dark is organized by Mia Fineman, Assistant Curator in the Department of Photographs.

In conjunction with the exhibition, on Friday, June 17, at 6 p.m. the Museum will present a screening of the classic film noir Night and the City (1950), directed by Jules Dassin. The film is set in the seedy underworld of London and features Richard Widmark and Gene Tierney. In addition, the Museum will offer gallery talks by Mia Fineman on June 17, June 29, July 14, and July 26 at 11 a.m.