No Government No Cry

A project by Kendell Geers. The exhibition is a fragile attempt to embody and explore the notion of revolution. During the exhibition, Geers will seek out his pre-linguistic self, and explore the alpha-bete of his inner animal. He set up the exhibition in a contagious way, and also invited many other artists, writers, curators, friends and guests to contribute their thoughts and doubts. 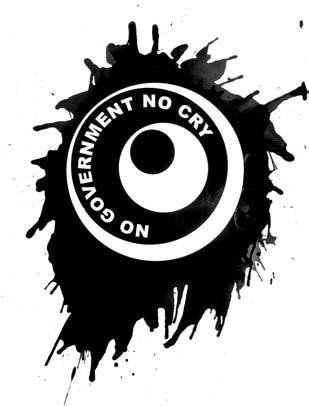 The point of departure for the exhibition ‘No government No cry’ at CIAP in Hasselt from 23 April until 26 June 2011, is a manifes- to written by artist Kendell Geers. Through poignant statements, he explores the often ignored link between political and natural revolutions, mourns the loss of our talent for revolution and the underlying causes, and gives us clues on how to re-member our inner alpha-bêtes to live a more true life.

The notion revolution, in all its previously unexplored senses, is the igniter of the exhibition. Kendell Geers points out that we, as individuals, do have control over revolution. If war be the domain of political leadership, then its social antithesis must be revolu- tion. Yet, right now, with our 290 days of no-government world re- cord and calm streets, it could be declared that in Belgium Revo- lution is over (if you want it). Put more cynically, revolution is over because you want it. In the lands of luxury, revolution seems impossible for nobody dares to rock a boat for fear of getting wet. Belgium is a country without much struggle and as a result a great deal is taken for granted. Life is good and the comfort zone very broad. But we have drifted away. Capitalism with its instant gratification logic has malformed us, we surrendered our senses and sensitivities, our lifestyle destroys others and our planet.

Nothing less than a total Revolution, one from within each human, can change our habits and restore nature to a regenera- tive condition. The key, Kendell Geers says, is love. The Revolu- tion we need can only begin with unconditional love of the self in tight relation to the holistic idea that we are part of a complex web of life. The exhibition ‘No Government No Cry’ is a fragile attempt to embody and explore this holistic perception. During the exhibition, Kendell Geers will seek out his pre-linguistic self, and explore the alpha-bête of his inner animal. He set up the exhibition in a contagious way, and also invited many other artists, writers, curators, friends and guests to contribute their thoughts and doubts upon this manifesto and to open a discussion not to be missed.

Exhibition program
On Saturday 23 April, from 19:00 hrs, the exhibition can be previewed with accompanying lectures and performances by Kendell Geers, Marina Abramovic, Ilse Ghekiere, Stephen Thompson, Mårten Spångberg and Krööt Juurak, and other guests! Also this evening the documentary ‘Enjoy Poverty’ by Renzo Martens will be screened.

On Saturday 30 April, from 15:00 hrs, ‘No Government No Cry’ will kick-off officially. During this opening/midissage there will be plenty performances by Marina Abramovic, Laurent Devèze, Liz Kinoshita, Anna Pajunen, Siet Raeymaekers, Jesus Macconnell (u no message me no mores), and other guests. The dance pro- gram is curated by Sandy Williams.

Note
Citizens of Hasselt and visitors may donate, to the project, any object, image, icon or totem which was once considered sacred, but that they no longer feel connected with.