Wael Shawky's work explores transitional events in society, politics, culture and religion in the Arab World, he presents: Cabaret Crusades: The Horror Show Files tells the story of the First Crusade of 1096-1099 from the perspectives of Arab historians. Huang Yong Ping makes arresting sculptures ehich are act as allegories - they combine references that are topical and traditional, political and mythological. The artist Thomas Demand has curated a selection of postcards of grottoes for our Small Collections Room, filling each cabinet with multiple images of curious subterranean spaces. In the Bookmark Project the artists select texts or images that influence or interest them and, in turn, their highlighting of this content affects our reading of it. 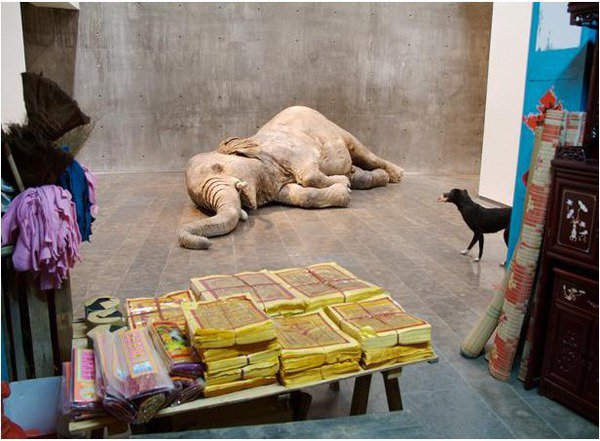 Wael Shawky’s work explores transitional events in society, politics, culture and religion in the Arab World. These concerns have been brought into sharp focus by recent upheavals in Egypt. Shawky lives in Alexandria, Egypt’s second city.
Al–Aqsa Park is a digital animation of the Dome of the Rock, the most recognisable monument in Jerusalem and a masterpiece of Islamic architecture that has great symbolic significance for all Muslims. The Old City in Jerusalem is where Judaism, Christianity and Islam converge.

Built between 689 and 691 AD on the site of a Jewish temple destroyed by the Romans, the Dome of the Rock has been contested throughout history, right up to the present day. The rock platform on which it stands is believed by Jewish scholars to be the probable location of the Holy of Holies, the most propitious place for prayer. It is also on the place where Sunni Muslims believe Mohammed ascended to heaven. The Crusaders turned it into a Church, Israel hoisted its flag over it during the Six Day War in 1967, and the second Intifada was sparked when Ariel Sharon, then leader of the Israeli Likud Party, paid it a provocative visit in 2000. The Dome of the Rock is now a familiar graffiti image of Palestinian resistance to Israeli domination.

In Shawky’s video the Dome rises and rotates like a fairground carousel – an ironic nod towards the endless merry–go–round of Israeli–Palestinian talks and conflicts, perhaps. Here, this ancient monument also looks like a UFO, as if it has arrived from the future or belongs to a spiritual eternity.

Cabaret Crusades: The Horror Show Files tells the story of the First Crusade of 1096 – 1099 from the perspectives of Arab historians. Made using an Italian collection of 200 year old puppets in the place of actors, it is a saga of bloody battles, betrayal and gruesome civilian massacre – a genuine horror show, despite the beauty and artifice of the puppets and sets. The film is accompanied by works that look like abstract paintings and refer to Crusader heraldry that are made of geometric pieces of dark, sparkling tarmac.

The focus of Telematch Sadat is on a pivotal event in recent Egyptian political history.The video is a re–staging of the assassination of President Sadat in 1981. Sadat, who fought Israel in the 1973 Arab-Israeli War, regained the Sinai Peninsula for Egypt in the US-brokered Egyptian-Israeli Peace Treaty of 1981 – a move popular in Egypt but controversial in the Arab world. His death ushered in 29 years of dictatorship under Hosni Mubarak, who recently abdicated after mass popular protests. Soldiers and assassins are played by children, armoured vehicles replaced by donkeys and carts, and the desert substituted for the streets of Cairo. Telematch was a German TV gameshow popular in the Arab World in the 1970s and 1980s.

Shawky’s use of puppets, child actors, sci-fi imagery and entertainment formats emphasises how important political events exert a powerful imaginary and mythical hold on the ways we think of ourselves and the world.

Huang Yong Ping is one of the leading Chinese artists of his generation. He moved to Paris in 1989 after participating in the renowned Magiciens de la Terre exhibition at Centre Pompidou that year, soon after the brutal suppression of the demonstrations in Tiananmen Square. Today he divides his time between studios in Paris and Fujian province in southern China.

Huang makes arresting – and often very large – sculptures. Many feature animals and architecture, in unexpected combinations. His sculptures act as allegories – they combine references that are topical and traditional, political and mythological. His work examines how cultures collide and transform as a result of massive political and economic forces – imperialism, for example, or rapid economic globalization.

World religions are a theme in his work. In this exhibition there are references to Islam, Buddhism and the Judeo–Christian tradition. They include a minaret from a mosque, and a terrifying Leviathan – or sea monster – from the Book of Job in the Old Testament. Seven Buddhas dangle on a fishing line in front of it.

In Marché de Punya a market stall sells printed prayers, incense sticks and candles – all commonly used as religious offerings in China. The elephant, a sign of mental strength in China, lies prostrate in front of it, a metaphor for the commercialisation of ancient traditions and the loss of religious integrity.
Animals are also used to symbolise recent political events. In Amerigo Vespucci a metallic fighting dog, as imposing as a US Marine, cocks his leg against the immaculate gallery wall, marking his territory with a pool of urine in the shape of the USA.

One of Huang’s most ambitious works, Bat Project IV, made in 2004, will be presented for the first time in Europe. Visitors enter the fuselage of an actual American spy plane. Stuffed bats hang in the blasted windows of its cockpit, an example of Huang’s play with the double meanings of symbols – bats, creatures of the night, are sometimes feared in the West, but they are believed to bring good fortune in China. Inside you can find out about the diplomatic crisis that followed the collision of a US reconnaissance plane – a bat logo on its tail fin – with a Chinese fighter jet in 2001.

Humour and an evident delight in manipulating images and materials are ever present in Huang’s political and moral interpretations of the world today.

The Small Collections Room
Postcards from the World Beneath: the collection of Gerhard Stein, curated by Thomas Demand

The artist Thomas Demand has curated a selection of postcards of grottoes for our Small Collections Room, filling each cabinet with multiple images of curious subterranean spaces. Grottoes are a continual source of fascination; in literature, grottoes and caves are often linked to the deeper issues of the human psyche, their interior landscapes reflecting the recesses of the unconscious mind. The grotto is one of the most ancient forms of human dwelling. Often thought of as spiritual or sacred places, grottoes were used by early faith groups as places of worship or retreat. Aspects of Gothic architecture take their cue from the natural phenomena of stalactites, stalagmites and calcareous incrustations. The mysterious ‘world beneath’ depicted in the postcards finds it echo in the ‘hidden space’ of the Small Collections Room, with its ornate antique cabinets and dark paneled interior, designed by the artist Pablo Bronstein.

Grottoes also chime with Nottingham’s own underground history. It is noted for the 400 caves – once dwellings, storerooms, hiding places and even factories – that you can still see in parts of the city.

Demand discovered the collection of Gerhard Stein – a computer engineer from south Germany who has amassed over 50,000 postcards of grottoes over his 30 years of collecting– during a period of research for his recent project, Grotto (2006). Demand’s artistic process involves building intricate and life-like models of significant locations, mostly from paper and card. These are photographed, and then the model is destroyed, leaving a life-sized colour image of a very realistic yet fictive scene.

Grotto was inspired by a postcard of a Mallorcan grotto which Demand has never visited, sent to the artist by a friend. Stein, an avid speleologist, sometimes does not even enter the grotto itself on his various trips, but only the kiosk in front of it.

We commissioned the artist Pablo Bronstein to create a 21st century take on a "cabinet of curiosities" or wunderkammer - the root of the modern museum.

Four ornate cabinets, dating from the 17th to the 19th centuries, have been given their own space off The Study, designed by Bronstein and our architects Caruso St John. These intricate places of discovery reflect Bronstein's interest in Baroque and Neo-Classical architecture. They also have an affinity with contemporary art's concern with collecting and display.

The content's of each cabinet form miniture exhibitions, curated by artists, writers and cultural commentators.

The books and magazines collected in the Study form a loose portrait of our organisation. They represent an accumulation of interests and ideas, and chart the development of our exhibitions and events; these are the books that ignite and inform our thinking. This continually growing and evolving resource is always available for our visitors to discover, research, get inspired - or simply have space to think.

The eleven Nottingham-based artists involved in this project were each asked to make a bookmark and choose a book to insert it into. This simple format allows for multiple reflections on the nature of creative practice. The artists select texts or images that influence or interest them and, in turn, their highlighting of this content affects our reading of it. The bookmarks represent individual threads that are spun out of the mass of ideas contained within these shelves, connecting the texts and images selected with the mind of the artist and the work they produce.

Popova’s selection of contributors to the project represents an unscientific cross-section of contemporary artists based in Nottingham today; amongst them are painters, sculptors, writers and those who work across disciplines, in the hybrid forms that characterise much contemporary art practice today. Their bookmarks act as navigational points, mapping Nottingham’s art community and pointing towards the various fields of thought their artwork opens out to.

The Bookmark Project zine, produced by Yelena Popova, is available in the Study and can also be purchased at Shop.Contemporary.