'Taxi to Berlin' is a natural extension of a week-long performance Taxi to Museum that took place during his 2010-solo exhibition at the MUMOK Museum, Vienna. The centre-piece and starting point of the exhibition was the Zastava 101, a car that stands as a metaphor for a stagnating society. 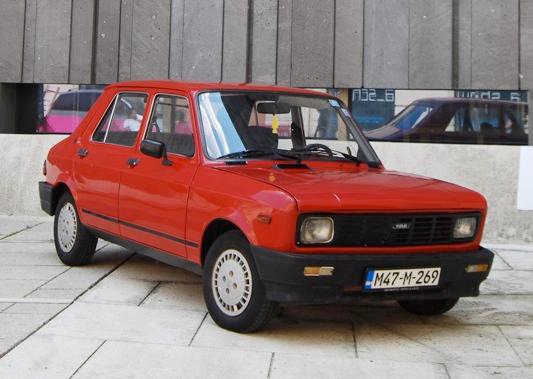 Most of the artist’s work begins with an action, which is rooted in his own immediate environment. The next step is to alter the circumstance, thus creating new possibilities and aspects, which he then presents to the wider world of art. Since the beginning of Miljanovic’s artistic career, there has always been a performance aspect to his work, yet he seems to be moving slowly but surely towards “lived through” experiences with his audience. Taxi to Berlin is a natural extension of a week-long performance Taxi to Museum that took place during his 2010-solo exhibition at the MUMOK Museum, Vienna. The centre-piece and starting point of the exhibition was the Zastava 101, a car that stands as a metaphor for a stagnating society. It was manufactured in Yugoslavia from 1972 till 2008 – the original model not changing during that entire period of time. In Vienna, the artist acted as a taxi driver in the Zastava 101 for one week, taking calls from customers who wished to be transported to the MUMOK.

For his Berlin exhibition, Miljanovic takes a step further with the Zastava 101 and creates the performance Art as Vehicle, serving art on the highways from his native Banja Luka in Bosnia & Herzegovina to Berlin. Like many past projects, he began with presenting the concept through an open source platform, mostly electronic and printed media. A month and a half before the exhibition, the artist announced an open call, for all citizens of Bosnia & Herzegovina, who need to travel to Berlin on 25 April, 2011 to contact him via phone or e-mail. He selected two of these, to receive a free ride in the Zastava 101 Car from Banka Luka to Berlin, approximately 24 hours in travel time.

Once in Berlin, the artist presents the outcme of the performance in the gallery space under the title Consequences of Art. Different parts and elements of the vehicle are on display as well as an edited video recording of the entire journey from Banja Luka to Berlin. The gallery becomes a parking lot for the Zastava 101. Displaying eight bottles on a shelf, filled with the oil that has been pumped out of the car and eight bottles of cooling fluid extracted from the engine, Miljanovic breaks down the elements that create the energy for the vehicle for the trip. At the opening of the exhibition, Miljanovic will symbolically release the air from all four tires, effectively releasing the air from Banja Luka in Berlin.