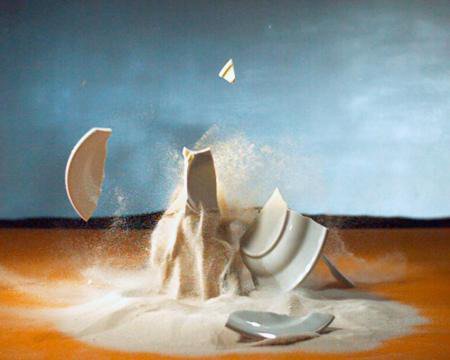 The Exhibition "Café des Rêves / The Café of Dreams" in the Zurich Helmhaus shows works created in the years between 1999 and 2011 by 22 different Swiss Video artists. Being multifariously applicable, the viewers perceive video as a medium between research and fiction. Seven Swiss Schools of Art partake in this informative, esthetically surprising and entertaining exhibition. The one who wants to linger between the many works worth looking at can do so while enjoying an extraordinary view onto the River Limmat in the especially installed coffeehouse.

The exhibition "Café des Rêves" in the Zurich Helmhaus brings together works which have caused a sensation in the last ten years: a sensation because they are exceptionally sustainable, farsighted, imaginative, funny or still. The presentation of these videos in the Helmhaus invites to a deepened second viewing – or to a first encounter. The selection does not lay claim on giving an overview on Swiss Video Art in recent years, but on following the pleasure principle: what is worth watching, what would I like to watch again?

Video proves to be an artistic medium at the mark of time: practical, simple, democratic and relatively inexpensive, it offers unrestricted possibilities. Stories can be caught in sight and sound or be invented. Finding and inventing have thus become two decisive motifs of the video artists: which topics, which stories move us today? The artists say: migration and urbanization, establishing identity and relationships, social rites and autism.

Besides the "finding" of topics and stories, the "inventing" of them play a role of at least the same importance: daydreams evolve, cultures amalgamate, and physical things become metaphysical. The pleasure of invention may tip over to become pangs of invention, just as the stories which are unearthed by the artists are not always joyful. The finding and inventing video works share the common claim to sharpen visual observations, to deepen them and to advance them. In doing so, society may also profit in non-artistic domains

To a younger generation, artists who grew up with the electronic engineering of digital image processing, video as a medium is especially attractive. This is, among others, one of the reasons why the art schools are participating in this exhibition. Being part of it, however, are also Swiss video pioneers such as Silvie Defraoui and Alexander Hahn. Half of the artists are from the French-speaking part, and considerably more than half of those who use this technical medium are women.

Generally, of the participating artists one single-channel work is shown, projected onto a screen or shown on monitor. The structure of the exhibition is kept as open as possible. Nearly seven hours of film can be viewed in the Helmhaus – not included are the works of the art schools and the tapes which are presented during the event.

The title of the exhibition, "Café des Rêves", is taken from one of the presented video works. Where to the traces lead us, only the attentive visitor will discern.

Finally, a café is also part of the exhibition; in dependence on the far away "Café des Rêves" it takes its name from thence. There, the submitted works from the Swiss art schools can be watched individually and at one's own discretion. Or, the satiated eyes may be given a soothing rest while enjoying a spectacular view on the River Limmat.

As usual, a series of events accompany this exhibition in the Zurich Helmhaus. Over a cup of coffee and a piece of cake, discussion rounds with participating artists will be held. "Music meets Videoart" is a review of essential Swiss video clips. The youngest high-flyer of the Swiss music scene and having just recently been awarded the title "best talent 2011 for music", is Steff la Cheffe. In the Helmhaus she is presented in sight and sound, including a short documentary portrait, several video clips and a live-set. Hannes Rickli's book "Videograms" will first be presented here, too. Guided tours, finally, will disclose background information and interesting interrelations to the eager visitor.

There is no catalogue – but, owing to the digital medium video, there is a website instead. Information about the presented works, the participating artists and the on-going events are offered on www.cafedesreves.ch

Curators of this exhibition, which is a co-production of the videocompany.ch and the Helmhaus Zurich, are Aufdi Aufdermauer and Simon Maurer.