Centered on the recent discovery of Untitled (Pastoral), a painting from 1947 that has never before been exhibited, '1947' includes paintings and drawings executed by the artist during the last year of his life. In addition to the newly discovered painting, the show features a number of works drawn from international collections that have not been shown in New York for more than twenty years including The Limit, a formally audacious painting that was unveiled at Julian Levy Gallery in February 1948. 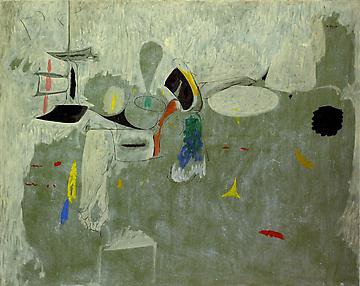 Gagosian Gallery is pleased to present an exhibition of paintings and drawings by Arshile Gorky.

Centered on the recent discovery of Untitled (Pastoral), a painting from 1947 that has never before been exhibited, “1947” includes paintings and drawings executed by the artist during the last year of his life. Untitled (Pastoral) was found in 2010 during the reframing of the painting Pastoral from the same series. The former was set behind Pastoral on the same stretcher, and remained covered for sixty-four years, thus its surface is startlingly fresh and vivid. In addition to the newly discovered painting, “1947” features a number of works drawn from international collections that have not been shown in New York for more than twenty years including The Limit, a formally audacious painting that was unveiled at Julian Levy Gallery in February 1948. Reviewing this exhibition in The Nation, Clement Greenberg commented: “Gorky at last arrives at himself and takes his place… among the very few contemporary American painters whose work is of more than national importance”. The painting was last shown in “Arshile Gorky: 1904-48, A Retrospective”, at the Solomon R. Guggenheim Museum in 1982.

In 1941, Gorky began integrating turpentine into his paints in order to loosen the structure and allow more freedom with form. This resulted in a dynamic aesthetic that moved away from the hard-edged, flat forms common to the work of the 1930s in favor of thinner lines and less saturated hues. In the late 1940s, Gorky began making forays from New York to the Virginia countryside, where he produced his “pastoral” work—an exploration of the classical Arcadian theme. Day after day, he went out into the fields, looking intently at the various flowers and grasses and working freely with pencil, pens, crayons, and watercolors. Later, he repeatedly drew the plein air drawings, integrating the ideas and lessons they contained into his formal vocabulary. He detached color from line to create discrete pictorial components; he washed the drawings in his bathtub, hung them up to dry, and scraped or sanded the surface. In this new surface experimentation the recognizable identity of an image was further altered by eliminating specific botanical or biological details.

By October of 1947, Gorky had produced approximately twenty-five major works, ten of which are included in this exhibition. Regarding the recently discovered Untitled (Pastoral), the conjecture is that he simply ran out of stretchers in August, when most of the city was on vacation, and so stretched new canvas over the existing painting in order to paint another version. In his haste to reunite with his family, who had been vacationing separately in Maine, Gorky simply forgot about the hidden canvas.

“1947” is a compelling presentation of how Gorky worked and a telling account of his complex vocabulary and unique approach to painting that influenced the work of artists such as Willem de Kooning. It provides extensive insight into the development of his themes and the delicate balance that he maintained between surrealism and abstraction, introspection and expressionism.

Arshile Gorky was born Vostanik Manoog Adoyan c.1904, in Khorkom, Armenia. He escaped the Armenian genocide in 1915, emigrated to the U.S. in 1920, and changed his name in the process of reinventing his identity. He attended the New School of Design, Boston (1922) and the Grand Central School of Art, New York City (1925). He took his own life in Connecticut in 1948. Major recent exhibitions include “Arshile Gorky: A Retrospective of Drawings,“ Whitney Museum of American Art (2003, traveled to Menil Collection, Houston in 2004). “Arshile Gorky: A Retrospective” opened at the Philadelphia Museum of Art in 2009 and traveled to the Tate Modern, London and the Museum of Contemporary Art, Los Angeles.

For further information please contact the gallery at newyork@gagosian.com or at 212.744.2313.