Stranger than paradise. The artist uses the figure of the animal, the landscape and the sound to create an allegory of a globalised world fluctuating between control and instability. Each piece draws on traditional Chinese culture and aesthetics in its use of a specific medium - ceramics, painting on silk - or a distinctive object in the form of a bronze gong. 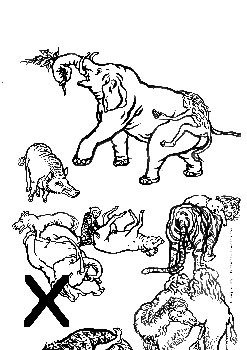 From 6 May to 5 June 2011, artist Yang Jiechang will show at La Criée three works under the umbrella title of Stranger than Paradise. With this exhibition, the artist uses the figure of the animal, the landscape and the sound to create an allegory of a globalised world fluctuating between control and instability.

In Yang Jiechang's works—whether a painting, an ink drawing, a sculpture, a collage or a filmed performance—traditional Chinese aesthetics and thinking unite powerfully to contemporary creativity. Trained in calligraphy at the People's Art Institute in Foshan, and in traditional Chinese painting at the Academy of Fine Arts in Canton, Yang Jiechang has also made a long and detailed study of Zen Buddhism and Taoism. In 1989 he took part in the acclaimed exhibition Les Magiciens de la terre at the Centre Pompidou in Paris, and moved definitively to Europe. Until the early years of the new millennium he devoted himself to an introspective oeuvre drawing on Chinese artistic tradition and contemporary cultural change. This was followed by a period of creation in which Yang Jiechang has questioned both social and political events of today's societies and his own life as an artist working between Europe and Asia.

Stranger than Paradise continues this exploration and interrogation of our globalised world. The three works on show – two of them specially created for the exhibition—call into question the concepts of control and instability that govern our systems of collective living. Each piece, moreover, draws on traditional Chinese culture and aesthetics in its use of a specific medium—ceramics, painting on silk—or a distinctive object in the form of a bronze gong.

On show in the main exhibition space, the installation Stranger than Paradise, Mountain Top (2011) comprises 200 ceramic sculptures on stands of different heights which show animals having sexual intercourse. Each pair involves different species—elephant and tiger, stork and puma, wolf and monkey—in a defying of physical singularities and incongruities. This sculptural landscape is associated with the video projection Gong… (2011), showing the artist striking a bronze gong with his head. Each impact produces a sound that spreads through the exhibition space, at the same time as its sets the image quivering. Pursued by these visual and sound vibrations, the visitor becomes the target of the blows to the gong. In another room the animal scenes already mentioned—metaphors of the differences, mutations, confusions and identities symptomatic of today's world—reappear on panels of ink-painted silk that make up the work Stranger than Paradise 1 (2011).

On Thursday 12 May 2011, with the help of Yang Jiechang, La Criée will be organising the event "Gong…" Party. The evening will centre on the performance Waving Basket: Eurasia Versus Paradise, created by the artist: two teams of young people—Eurasia and Paradise—confronting each other in a basketball mini-match that will really put their stability and dexterity to the test.