Shishkin eschews any definitive narrative in her work in favor of presenting questions with "maybe" for an answer. The Frank Benson and Ken Price exhibition presents 3 works by Benson from the last six years, with 3 works by Ken Price from the late 1980's and early 1990's. 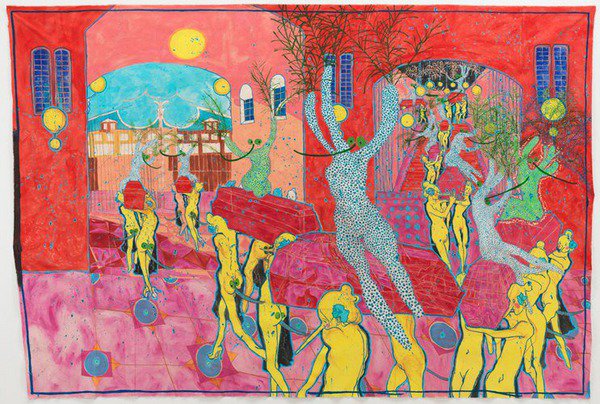 Zach Feuer Gallery is pleased to present Desaparecido, an exhibition of new work by Dasha Shishkin.

Shishkin eschews any definitive narrative in her work in favor of presenting questions with "maybe" for an answer. The plaintive, calm faces of the figures who populate her compositions belie the intense activities in which they are engaged. Each individual executes a particular task that informs a larger activity, but individual identities or actions disappear, intentionally or mistakenly, in a sea of activity or service.

Shishkin's complex compositions are executed using her characteristic economy of line, coupled with her use of bright blocks of color and elaborate patterning. Often using found materials, the artist employs the existing imperfections, such as the folds or creases in a canvas, to give shape to her work. Approximately 17 drawings in Desparecido are on mylar, a semi transparent surface, which Shishkin takes advantage of by applying several media including acrylic, ink and conte to the front as well as the reverse of the surface. Although colors, often in opposition to one another, at first dominate her compositions, line ultimately informs the space and composition of her work.

In Gallery 2, Zach Feuer Gallery will present an exhibition by Frank Benson in dialogue with work by Ken Price. Although the artists work in different media and are of two separate generations, both of their work addresses material and form in addition to surface with a particularly perverse and thoughtful touch. This exhibition of small works is designed by Frank Benson and will pair three works by him from the last six years, with three works by Ken Price from the late 1980's and early 1990's.

In 2012, Ken Price (born 1935, Los Angles) will have a retrospective open at the Los Angeles County Museum of Art that will travel to the Nasher Sculpture Center, Dallas and the Metropolitan Museum of Art. The work of Frank Benson (b. 1976, Virginia) has been featured in exhibitions at the Hammer Museum, Los Angles; Astrup Fearnley Museum of Modern Art, Oslo; Serpentine Gallery, London and the Sculpture Center, Long Island City.