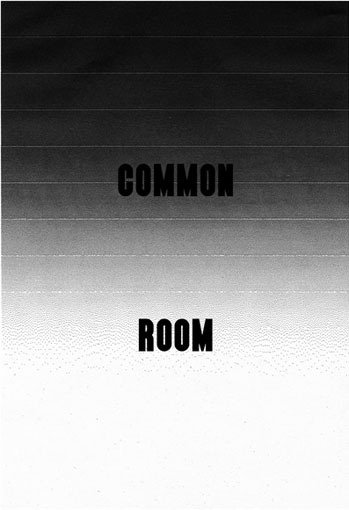 Pianissimo gallery is pleased to present the new project +, a series of exhibitions focused on young galleries and no profit spaces worldwide, invited to present their style, their "modus operandi", through a temporary residence of their programs, placing Pianissimo only as a spectator of the event.

COMMON ROOM brings five artists to Pianissimo that have exhibited at Christopher Crescent since it was founded in 2009.

For this show, Steve Bishop has collaborated with artist Jack Vickridge to produce Still stills (2011). A number of monoprints, exemplifying the subtle glitches and chance accidents occurring within the printing technique itself, are framed by an arrangement of architectural dichroic glass, reflecting different colours depending on the viewer’s position in relation to the work. At once introspective and outwardly informed, the shared nature of form dictated by situation allows for temporary pauses in a shifting visual rhythm. Samuel Fouracre’s Platitudes for Men (2010) is hit of revved up, reverberating testosterone. Lamborghini’s, Rolex watches and LA pornography oscillate wildly in a brew of pumped up, hard-on, cash happy virility where a man’s car can take him to levels of pleasure unknown to mere mortals, Fouracre’s editing and cutting methods results in a film that rides through the cut, thrust and pell-mell of male desire.

Dean Kissick is interested in the torrential flow of imagery of artworks old and new, fashion and advertising images, images on blogs etc. Inspired by trips through museums and art fairs, Kissick’s videos are an attempt to capture this overwhelming delivery of information through hallucinatory visions, made possible through the use of randomised computer software. Soundtracks are also commissioned by the artist, highly contemporary electronic tunes that further inform the works zeitgeist relevance.

Eddie Peake is inherently interested in the politics of personal and lived experience. Referencing past actions and previous experiences, through the form of sculptures, paintings, self portraiture and choreographed performances, Peake draws from a deeply personal pool of reference material and handles the surface as a means to conceal inherent Peake-ness behind a facade of quasi perfection. For Common Room he is showing a series of paintings made with the use of masking tape that deal with the idea of negative space and how presence can be made through absence. These paintings are hung alongside a selection from an ongoing series of portraits of the artist in everyday situations, staged poses or whilst taking part in his own performances.

Dan Shaw-Town will be showing a series of works from his ongoing process based practice. Working with the raw material of heavily graphite-covered paper, he embarks on an entropic process of covering and rubbing, folding and flattening. Constantly pushing the limitations of his chosen support in pursuit of a new surface, the system of regurgitation and recycling brings about an atmosphere of active flux. Through this unfamiliar handling of the material these flat sheets, standardized in size and hung flat to the wall with nails running through their steel grommets, or multi-layered in floor-based compositions, bring to mind the attributes of sculpture, that of physical exertion and dirty hands, the results of actions, coating, sanding, bending and adorning.

For COMMON ROOM, gallery director Simon Christopher has used his own gallery’s templates to format a press release and an invite in the Christopher Crescent house style, to emphasise the gallery’s temporary residence within Pianissimo’s own space.