About collections. She was a committed collector and acquired over 975 pieces joined the collections, including paintings, artists' books, videos, documentation, catalogues and more 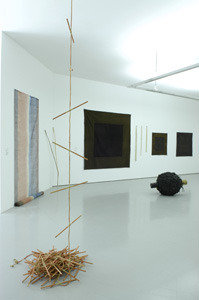 Vicky Remy, who died in December 2010, was a committed collector. Her novel approach of exchanging works for items from "Choses", her famous Saint-Tropez fashion boutique, as well as her regular purchases, ultimately built up a collection that she wanted to be meticulous in its approach. Bernar Venet was an initiator as well as a friend: he helped her to discover the avant-garde world of the 1960s-70s, whereas she had initially been interested in the generation of the 1950s, buying works by Atlan, for instance. She also formed lasting friendships with figures like Tania Mouraud and Olivier Mosset. For Fluxus, she was involved with Ben in the publication of a journal, joining the editorial board and providing financial support. She was open to Eastern philosophy and helped Robert Filliou to undertake his retreat in a Buddhist monastery. At the same, she acquired a large number of works by the Art & Language and Supports/Surfaces groups (taking a particular interest in the work of Andre Valensi). Having been approached for loans by the Saint-Etienne Museum of Modern Art during its early years in the 1980s, she realised that her collection would benefit from being integrated into a recognised museum and being seen alongside its works. And so in 1992, over 975 pieces joined the collections, including paintings, artists' books, videos, documentation, catalogues and more. The donation plugged major gaps in the collections, particularly the Fluxus works, as well as setting an example for other benefactors. (In the image: Noel Dolla, Toni Grand, Bernard Pages, Andre Valensi, Claude Viallat. Donation Vicky Remy. DR.)