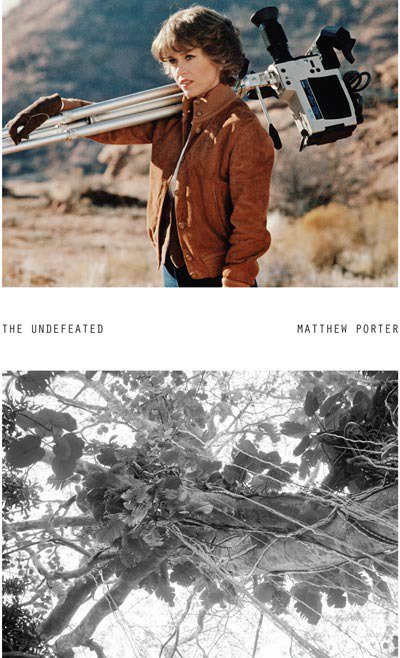 The Undefeated is a 1969 film starring John Wayne. The previous year he wrote and directed The Green Berets, an agitprop narrative about career soldiers fighting in Vietnam. That was also the year that Jane Fonda starred in Barbarella. While filming, Fonda began to realize that director and husband Roger Vadim wasn’t an exemplar of New Leftist virtue, as she had previously thought. His misogynistic attitude towards their sex life and his indifference to her emotional needs imbued her with an urge for independence, and adventitiously she began to become more politically active. But Barbarella wouldn’t be the last time Jane Fonda would be photographed wearing tights; in 1982 she released her first exercise video to help fund the Campaign for Economic Democracy, an organization started with her next husband Tom Hayden. Jane Fonda’s Workout Book was a best-seller, and Jane Fonda’s Workout Video went on to sell 17 million copies.

Last summer I drove to Kingston, New York, to photograph a working replica of the car from the 1979 Australian film Mad Max. The film, the first in a series, is critically understood as an anti-establishment film about the effects of mechanized violence on a society struggling to maintain order in an increasingly apocalyptic landscape. The owner of the replica car is a retired New York State Trooper, who commissioned the modifications in Australia and had the car shipped to him in New York. While I was photographing the car, he explained that he saw the film as a different sort of cautionary tale—a warning to liberals about the dangers of a lenient legal system that undervalues and impairs its law enforcement.

In 1972 Jane Fonda traveled to North Vietnam. Like hundreds of other Americans before her, she was seeking to confirm rumors of the deadly effects of chemical weapons, the bombing of civilian targets by the American Military, and to deliver mail to American POWs. On her last day there, she was driven to the site of an anti-aircraft gun emplacement (inactive at the time), surrounded by American, Japanese, and Vietnamese journalists, and casually directed to sit at the helm of the weapon. Members of the local community sang Fonda a song, and she responded with an emphatic performance of a Vietnamese anti-war song written by students in Saigon. It was a rapturous moment. Everyone applauded and Fonda, exhausted by the manic pace of her tour, clasped her hands together and thanked her hosts. A photograph from this encounter became the focal point of the 1972 short film titled Letter to Jane, a footnote to Tout Va Bien, and a pinnacle of Goddard pedagogy.

In the exhibition there are two photographs of hornets’ nests piled on tables and chairs. The nests have either been seasonably abandoned, or the hornets were exterminated. They are spherical, composed of concentric wrappings of what looks like low-grade cardboard—a material that’s been chewed and spit out by the hornets to synthesize into paper. The annual apocalypse affects every colony, but often leaves the nests intact.

John Wayne’s last collaboration with John Ford is 1963’s Donovan’s Reef. The film, redolent of period racism, is a campy send-off to Ford’s waning interest in war-primed masculinity. The love interest for Wayne’s character is an uptight Boston socialite and board chair whose prissy attitude Wayne meliorates with an over-the-knee spanking. The Hawaiian island of Kauai serves as the backdrop for the film, standing in as French Polynesia. Kauai has a long history as a location for Hollywood war movies because of the aesthetic approximation of its jungle foliage to Southeast Asia and the Pacific Theater.

Matthew Porter lives and works in Brooklyn. His work often features historical mash-ups, collapsing disparate events and cultural references within single frames, or spreading them out over a series of tightly edited photographs. His work was recently the subject of solo exhibitions in Los Angles and Dallas, and he was included in the International Center of Photography’s Perspectives 2010 in New York. In 2010 he curated shows at Mount Tremper Arts in upstate New York and M+B in Los Angeles. His interviews with artists will appear in Triple Canopy’s upcoming issue on photography.