The Museum of Contemporary Art in Krakow is the first such institution in Poland to be developed from scratch. The building was erected on the site of, and partly within the structure of, the former Schindler's Factory, in the postindustrial district of Zablocie, which in recent years has undergone a vigorous renaissance. The building was designed by Claudio Nardi, the Italian architect and interior designer. On the 19th May 2011 at 6 pm, the formal opening of the Museum will take place, as well as the presentation of the following inaugural exhibitions: History in Art, The MOCAK Collection, The Award of the Vordemberge-Gildewart Foundation, Maurycy Gomulicki. Bibliophilia, Ane Lan, The Opposite Pole of Society, Journey East. 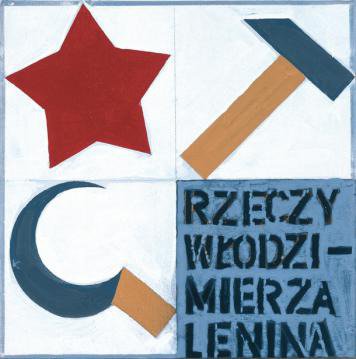 The Museum of Contemporary Art in Kraków is the first such institution in Poland to be developed from scratch. The building was erected on the site of, and partly within the structure of, the former Schindler's Factory, in the postindustrial district of Zabłocie, which in recent years has undergone a vigorous renaissance. The building was designed by Claudio Nardi, the Italian architect and interior designer.

MOCAK will be compiling, archiving and making accessible to the public an international collection of art, so as to demonstrate the changes which have taken place within art during the last 20 years, while relating the most recent artistic phenomena to the tradition of conceptual art. The programme of the institution also encompasses educational activity as well as research and publication projects.

The site of the Museum incorporates a library, a bookshop, an audiovisual hall and a café, including a – unique in Poland - restoration workshop for modern art.

On the 19th May 2011 at 6 pm, the formal opening of the Museum will take place, as well as the presentation of the following inaugural exhibitions:

The Museum’s Collection is a presentation of dozens of works, which are the foundation of MOCAK’s permanent collection. The exhibition will incorporate many works of Polish and international artists. This is a taster of the Collection, which will present a great variety of approaches, media and interpretations manifested in contemporary art.

History in Art is an international exhibition aiming to research in which ways history builds identity in the dimensions of the society and the individual. One of the main aims of the presentation is to examine the image of history in circulation; exposing the mendacities and inaccuracies present in the documentation of historical events. The role of individual interpretations offered by art provides an additional focus. The exhibition will be accompanied by a publication. The authors include Hans Belting, Nicolas Bourriaud, Tim Cole, Przemysław Czapliński, Ewa Domańska, Ben Kiernan, Dominick LaCapra, Tadeusz Nyczek, Mieczysław Porębski, Maria Anna Potocka, Hayden White.

The cycle aims to demonstrate how a problem which society is aware of, apparently generally comprehensible, is perceived by artists and capable of divergent interpretations. In this way, the mechanism of art will be revealed: to provide the maximum breadth and diversity of vision. And, in turn, the basis of tolerance: a fascination with diversity of approach and interpretation.

Subsidized by The Ministry of Culture and National Heritage.

To use Walter Benjamin's terminology, Gomulicki can also be called a producer of culture. Looking at Gomulicki's work retrospectively, one notices the evolution of forms revolving around the categories of pleasure and ecstasy, already evident in the series of photographs shown in the 90s, ia, in the ZPAF-CSW Little Gallery; photographs which revealed a fascination with dolls and bodily parts, particularly parts of the female body, which the artist would render abstract by extreme close-up – an attempt to penetrate and decipher the carnal code of desire and fantasy. (Sentimental Typologies, 1999).

Literature and film are also amongst Gomulicki's interests. His interest in literature, which he grew up with – his great-grandfather Wiktor was a poet, writer and the first translator of Baudelaire, and his grandfather Juliusz Wiktor – a passionate researcher of literature – Gomulicki employed in his project Spring in the Library (2005-2010), in which the areas of fiction and knowledge contained in books are subordinate to aesthetics.

Viewing Maurycy Gomulicki's subsequent projects, one may reach the conclusion that for the artist, woman is an object of cult and desire; an objectified woman, subjected to ogling by the male eye, which carefully registers every detail - a controlling eye, focused on pleasure. She is an absurd being, on the one hand, extremely sophisticated, on the other, common in her extraordinariness. When conceived in this manner, the function of the artistic subject is as precise as possible; a dissection of a concrete, living woman in order to reach the abstract essence of temptation, of mythological femininity. As captured by Maurycy Gomulicki, woman is not just for looking at and to consume. This is different from a gradually exposed spectacle, a book divided into intriguing chapters. Woman is a doll, a mannequin and a goddess (Gomulicki is an idol-worshipper).

Bibliophilia
or the temptations which lurk amongst books*

The entire project revolves around my grandfather, Juliusz Wiktor Gomulicki, and his book collection – the library of a humanist and a wayward spirit, an aficionado of curiosities and a ladies man. Books were truly the backdrop of my childhood – for the first six years of my life, I lived in a place floor-to-ceiling piled chockablock with books, often in double rows. For the next thirty-something, I was an almost daily visitor there,. I treat a library as a source and as a backdrop to let my imagination roam; as a place of manifold initiations. The smell of dust and the daydreaming about girls coexist perfectly in my consciousness. To this day, whenever I look at pornographic photographs with books in the background, I find myself deciphering the titles visible along the shelves, instead of concentrating on the ecstatically writhing bodies. Books are not only the knowledge contained therein – for me, they are above all a source of pleasure. The books and women in my life have become as much the triggers for my fantasies as the conduits of their fulfillment. My life story is full of women writers and women readers.

Award of the Vordemberge-Gildewart Foundation
20 May – 26 June 2011

The Council of the Swiss foundation Vordemberge-Gildewart has invited Maria Anna Potocka to participate in the organisation of the next year's edition of the stipend competition. The international jury will vote the winner from the artists selected by the curator. The works of the artists who had been chosen for the competition will be presented in MOCAK.

In April, the international jury visited the Museum in order to assess the works of the selected artists. On the 16th April, the jury chose the winners.

Anna Okrasko is the winner of the main award, of 20 000 euro.
Jan Dziaczkowski and Róża Litwa were awarded the second awards of 10 000 euro each.

The Vordemberge-Gildewart Foundation was created in 1983 as a result of an initiative of Ilse Vordemberge, who was fulfilling the last wished of her late husband, Friedrich Vordemberge-Gildewart. The aim of the foundation as stated in its statute is support for young artists, below the age of 35. The jury grants the chosen artist a sufficient stipend to cover the maintenance costs and the cost of artistic activity for one year. It is the task of the curator invited by the Foundation to organise an exhibition presenting the selected artists and to prepare documentation of the artistic activity of each artist.

All the World's Women Are in Me!

All the World's Women Are in Me! is a male edition of a feminist exhibition. It shows woman's presence in the world, her versatility and her ability to adapt to all circumstances. The exhibition highlights commonly prevailing stereotypes in the treatment of women and their helplessness in standing up to them. This is a statement about the changing role of gender at a time of 'wider democracy', which requires empathy with the other party and the situation itself, as well as an ability to become – at least for a moment – someone else.

Ane Lane sets up situations which oblige him to become a woman, which entails looking at the world from a female perspective. But – as there is no such thing as an archetypal woman, but there are as many women as there are there individual stories, circumstances or occupations – the artist becomes very different characters. He is at all times very sympathetic to his subjects. There is no irony in his works – unless we assume that his submission to the roles undertaken is ironic; there is no dressing up, no drag. There is a genuine need to empathise – a gesture which women had not experienced before.

The exhibition is organized as a part of the project Norway Expanded.

Artists from Armenia, Azerbaijan, Belarus, Georgia, Moldova, Ukraine and Poland will be invited to take part in the exhibition "Journey East". We shall neither attempt to group works according to their nationality, nor pretend that the issue of national identity and national belonging is invisible. A young state and the history of a country do affect the condition of art in that country. After all, artistic activity depends not only on the artist’s own resources, but also on the artistic educational and other institutions which support the process of the production and exhibition of works, but also on the size of the artistic community and the presence of curators and art critics. We have received signals from the majority of the participant countries that these are vital issues. For this reason, we ask artists what inspires them in their particular place and time.

Edwin Bendyk prophesies that the solution to global woes is to create interpersonal relationships based on love, and not on competition, hierarchy or domination. The focus is on love which goes beyond a feeling between any two people; we are looking for positive emotions, which often create bonds between people all over the world which can provide an alternative to those mediated by the state or the market. We want to ask artists what role, in their opinion, such emotions play in a post-communist society and whether they regard building new social capital on positive relations as Utopian – or whether, indeed, such a notion is realistic. We perceive our project as an open situation, mapping out diverse paths for participation and interpretation: from observation and listening to conversation, from co-operation to sharing in writing. We will be collecting objects and organising meetings, discussions, workshops, performances and installations in public spaces.

The exhibition will be presented in the Arsenał gallery in Białystok in August and September, and subsequently in the Art-Kyiv Contemporary and in the Museum of Contemporary Art in Krakow.

The exhibition The Opposite Pole of Society will present works from the collection of the Essl Museum in Austria. The title of the exhibition was inspired by the statement from a Viennese Actionist, Otto Mühl: ‘In my actions, I started off from artistic premises, but I see everything less and less in terms of art. What I do would better be described as a kind of opposite pole of society.’
The selection of the works presented will highlight socially involved artistic stances. It will show art as a tool of social negotiation against the backdrop of the social and political transformations which have been taking place from the 1960s. The core of the show are the works of the Viennese Actionists Günter Brus, Otto Mühl, Hermann Nitsch and Rudolf Schwarzkogler as well as Valie Export.
This will be the first such large exhibition of Viennese Actionism in Poland.