Get in the haze / PlayFace InterCult

Freiraum quartier21 shows international exhibition projects focusing on digital culture, fashion, and design. Where does fashion end and art begin? This question is at the center of the exhibition 'Get in the haze'. The show takes a close look at prize-winning and recognized fashion designers and artists who are not afraid of hybrid art forms. 'PlayFace InterCult' offers a playful exploration of the interfaces between humans and machines. 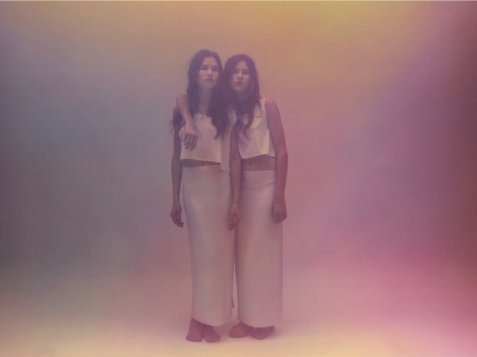 Since its opening in June 2001, the MuseumsQuartier has evolved into one of the largest art and culture complexes in the world. At the same time, the MQ is a cultural oasis and a popular meeting place for some 3.6 million visitors a year. “On the occasion of our tenth anniversary, we will be offering even more extensive and diverse cultural activities than usual in the period from April to October 2011. In addition to programs of the institutions based in the MQ, numerous projects with various Austrian and international partners are in the works,” says MuseumsQuartier Director Wolfgang Waldner. The first is the Flederhaus project, starting on April 14. This extravagant house, an art object made of wood, is meant to symbolize sustainable building and inspire us to think about the future. In contrast, the open air cartoon exhibition “Wicked Pictures: Masterpieces of Black Humor” is designed to make us smile. The program also includes an exhibition on digital culture (“PlayFace InterCult”) and an international dance day.

In early May, giant inflatable plastic sculptures created by noted Austrian artists like Erwin Wurm, Peter Sandbichler, and Gunter Damisch, will dominate the MQ Forecourt as visible examples of the art to innovate. The sculptures will return for two more weeks in early July and late September. Then, on May 5, the Sommer im MQ season will officially open with an eclectic music and dance program as part of the Kons Goes Public event in cooperation with Konservatorium Wien private university. The next day is dedicated to Europa im MQ, a theme day for kids and young adults followed by concerts and a cabaret with Stermann & Grissemann for the public at large. Mid-May brings the opening of “GET IN THE HAZE”, a fashion exhibition dedicated to the controversial relationship between fashion and contemporary art. The mobile installation “Sofa Unplugged” by Josef Trattner and Schlebrügge Verlag invites visitors to explore urban space and get involved in actions, discussions, and readings on three different dates. Another highlight is Hubert Lepka and Lawine Torrèn’s “Sofamaschine” on May 20 – a choreography with Enzos, forklifts, and dancers.

Starting in June, a net of sound objects will be stretched over the Main MQ Courtyard, reverberating with individual sounds, barely audible whispers, sound clips, and entire sound compositions as the wind moves and in response to the everyday choreography of the people on the plaza below. In addition to the pre-opening of the O-Töne literary series with Péter Esterházy, other events in June include an unusual concert with the Wiener Beschwerdechor, the Long Night of European Music, and sand sculpture art from The Netherlands. The MuseumsQuartier Wien first opened on June 30, 2001. Today, ten years later, we’re celebrating the anniversary with a big open air event. It will kick off with the Czech duo DVA, followed by the Polish band Miloopa and Romanian-German vocalist Miss Platinum. Afterwards, the German artist group URBANSCREEN will give an audiovisual performance on the facade of the LEOPOLD MUSEUM, curated by the audiovisual festival sound:frame.

In the months of July and August the popular literary and film festivals O-Töne and frame[o]ut will return to the MQ like every year. For the anniversary season, O-Töne will be expanding its program with renowned European writers and introducing Austrian-European double features with prominent authors to its open air readings. For the first time, the frame[o]ut film festival will include selected European feature and documentary films as well as new approaches to films such as crowd-sourced movies, fan movies, machinima, game movies, innovative animation, music videos, and short films.

In September, the MUMOK is celebrating its own 10-year anniversary in the MQ with the reopening of the museum and the premiere show “Museum of Wishes.” The LEOPOLD MUSEUM first opened ten years ago as well. Renowned light artist Waltraut Cooper has designed a special light installation to mark the occasion. At the same time, the museum will be presenting a large- scale exhibition on Egon Schiele, the artist at the center of the collection activities of museum founder Rudolf Leopold (1925–2010). The show is subtitled “Melancholy and Provocation.” In September, the MQ Vienna Fashion Week returns for the third year in succession. It features ready-to-wear collections by some 70 designers and opulent fashion shows. In early October, the concert organizer Jeunesse will kick off its Vienna season in the MQ. This time, the motto of the open air event is Experience Music. Throughout the anniversary period, numerous additional events will take place in cooperation with external partners, the institutions based in the MQ, and the quartier21 initiatives. The full program and the anniversary publication are available for download at www.mqw.at/mq10.

GET IN THE HAZE
Curated by Lliure Briz

Where does fashion end and art begin? This question is at the center of the exhibition ‚GET IN THE HAZE‛ at freiraum quartier21 INTERNATIONAL. Curated by Lliure Briz (ESP) and opening on May 19, the show takes a close look at prize-winning and recognized fashion designers and artists who are not afraid of hybrid art forms.

Alongside the fashion creations, videos, photographs, installations, sculptures, and textile art presented in the exhibition, an accompanying program will feature performances, film screenings, music sets, lectures, and workshops for kids and young adults.

‚After the fashion exhibits ‘50 +/- anni di moda italiana’ and ‘Fish and Chips, Twice Please?!’ this is the third time that freiraum quartier21 INTERNATIONAL is hosting a show about the art of fashion. The exhibition project ‘GET IN THE HAZE’ gathers unconventional talents whose work ranges from radical to eccentric and visionary. We invite everyone who loves fashion and art to get into the haze where the borders between art disciplines become blurred,‛ says Wolfgang Waldner, director of the MuseumsQuartier Wien.

The exhibition is taking place in conjunction with the tenth anniversary of the MuseumsQuartier Wien and is organized by the Federal Ministry for European and International Affairs, the Spanish Embassy in Austria, Instituto Cervantes, the Flemish Representation in Vienna, and Unit F’s ‚11 festival for fashion & photography‛.

The freiraum quartier21 INTERNATIONAL exhibition series at quartier21 shows transnational exhibitions and projects in the exhibition space by the same name at the MuseumsQuartier Wien. Since fall 2009, six exhibitions on the core quartier21 topics digital art, fashion, and design have been staged there in cooperation with numerous partners from Austria and abroad, attracting a total of more than 70,000 visitors.

"PlayFace InterCult" offers a playful exploration of the interfaces between humans and machines, curated by Ekmel Ertan, Martin Kaltenbrunner, and Georg Russegger. On view in the freiraum quartier21 INTERNATIONAL exhibition space, it is presented in cooperation with the Federal Ministry for European and International Affairs and features selected projects by the Interface Culture Lab at the Linz University of Art and young media art from the Istanbul-based amber Art and Technology Platform.